Posted in: No Huddle by Gino Sassani on February 2nd, 2016 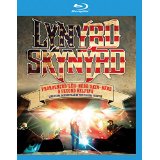 That seems to be the case with the Southern Rock band Lynyrd Skynyrd. Few bands have experienced the level of tragedy this one has. It’s somewhat of a miracle that any version of the band would still be standing. But they are thriving and doing their best to keep their particular sound alive. And what better place to demonstrate that nearly 50 years after they were formed than back home in Jacksonville, Florida where the band’s original members were formed. (No, they didn’t come from Alabama.)

I was never a huge fan of the band, but like most music lovers, I was drawn to hits like Free Bird. In my high school band we played Free Bird, Gimme Three Steps, and … of course, Sweet Home Alabama. In later years another band of mine discovered the similarities with another iconic song, and we’d re-written some lyrics and would perform Werewolves Of Alabama. If you don’t believe me, check it out for yourself.

Even though I was a casual fan, I still remember sitting on my bed and hearing the radio report on October 20th, 1977. A plane carrying the band from one concert to another crashed killing lead vocalist/writer Ronnie Van Zant and other members of the band and crew. It would mark the end of the band for nearly 10 years before the survivors reunited for an instrumental version of Free Bird at a Charlie Daniels Voluntary benefit concert. The reception convinced the survivors that the fans wanted more. They recruited Ronnie’s younger brother Johnny to step in and reproduce the vocals, and various versions of the band emerged over the years.

Tragedy was still never far behind. Allen Collins would die of pneumonia in early 1990. Car crashes would take two other band members over the years. All of this leaves Gary Rossington as the only living member of the original band in the lineup.

Enter 2015, and the band decides to return to Jacksonville for two special shows. The first would be to play the album Pronounced LEH – NERD – SKIN- NERD in its entirety on stage. The second night they would do the same for the band’s follow-up album Second Helping. It all happened at The Florida Theatre in Jacksonville in 2015. The back-to-back concerts are now available on Blu-ray from Eagle Vision.

The line-up included: original member Gary Rossington on guitar, Johnny Van Zant on lead vocals, Rickey Medlocke and Mark Matejka on guitars, Michael Cartellone on drums, appropriately named Peter Keys on keyboards, and Johnny Colt on bass. Back vocals were provided by Gary’s wife Dale Krantz Rossington and Carol Chase. Interestingly it would be their competition over Dale that led to Allen Collin’s split with Rossington. Other musicians throughout the release include: Jim Horn, the famous Sax player, on alto sax, Paul Jackson on trumpet, Myles Moore on baritone sax, Nick Campbell on additional percussion, and Steve “Boxcar” Traum on harmonica.

The performances are tight. Certainly there are different nuances with this band and the albums themselves. Solos aren’t necessarily note for note, and any guitarist will have a distinctive style. Johnny sounds quite a bit like his brother, but let’s not kid ourselves. It’s not the same voice. These are all things that change over time even when the members remain the same. Live shows always have their own nuances that make them worth attending or watching. If you want just a repeat of the albums, they’re available on CD. There’s a lot to enjoy for the band’s fans, and doing these full album shows means you get to hear live versions of songs just not done live.

The band’s stage is a simple one. They’re not here to dazzle you with a light show or effects. The music is center stage, and that’s what the fans are looking for. It sounds tight with a DTS-HD MA uncompressed mix that will be better than any CD you remember listening to. Johnny has learned how to work the crowd, and there’s a warm but not overt tribute to Ronnie and the late members during Free Bird.

If you’re offended by the Rebel flag which has become a trend these days, you’re not likely fans of this particular band. It’s a part of their heritage and culture and shows up throughout the performance. If it offends you, then get over yourself. This isn’t about hatred here, or racism. I suspect that’s not the kind of thought that even occurs to any of these guys. It’s about the music and their own history. It would be very hard to consider this band to not be inclusive. They love their fans no matter who or what they are, and you’ll feel it if you give it a chance here.

The Ballad Of Curtis Loew

The Needle And The Spoon

Call Me The Breeze

The disc includes a nice color booklet and an interview segment with the band and the fans attending the show. Like them or not, Skynyrd has survived not only the test of time but tragedy of Shakespearean proportions. With all of that, if you ask anyone in the band they’d describe the years from another perspective. “It’s been sweet.”

Gino Sassani is a member of the Southeastern Film Critic's Association (SEFCA). He is a film and television critic based in Tampa, Florida. He's also the Senior Editor here at Upcomingdiscs. Gino started reviewing films in the early 1990's as a segment of his local television show Focus. He's an award-winning recording artist for Omega Records. Gino is currently working on his 8th album Merchants & Mercenaries. Gino took over Upcomingdiscs Dec 1, 2008. He works out of a home theater he calls The Reel World. Favorite films: The Godfather, The Godfather Part II, The Body Snatcher (Val Lewton film with Karloff and Lugosi, not the pod people film), Unforgiven, Gladiator, The Lion King, Jaws, Son Of Frankenstein, The Good, The Bad And The Ugly, and Monsters, Inc.
Tuesday Round Up: February 2, 2016 For Better or For Worse