Posted in: No Huddle by Brent Lorentson on February 4th, 2016 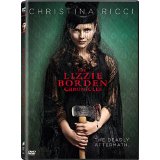 Following the Lifetime original movie Lizzie Borden Took an Axe, The Lizzie Borden Chronicles is a continuation of the tale about the young woman accused of killing her stepmother and father with an axe.  It’s tricky enough to do a feature length film about real people involved in real events; liberties seem to be taken for the sake of telling a good story.  It’s one of those things that when you see “Based on true events” or “Inspired by true events”; is there a difference, and does it even matter?  Well, if you are watching The Lizzie Borden Chronicles, accept the fact that though the character and her sister are very real, this is hardly biographical, but instead a fun game of “what if” that the creators have done with Lizzie Borden.  And it’s a wild eight-episode ride that they have set the viewers on.

In Fall River, Massachusetts, it’s 1893, and it has been four months since Lizzie Borden (Christina Ricci) has been acquitted for the murder of her father and stepmother.  Since the trial, Lizzie and her sister, Emma (Clea DuVall) have struggled to restore a life of normalcy and keep their violent past behind them.

To simply just follow these young women as they receive dirty looks from the local town folk as they get their lives back together just isn’t enough to pull in the viewers.  Instead what we get is a blood thirsty Lizzie Borden who isn’t afraid to kill anyone that crosses her or her sisters’ path, and there are a lot of bodies that pile up as the show goes on.  In many ways Lizzie Borden is the female Dexter, only she kills without a code, even if her murderous impulses can be rationalized in an odd sociopathic way.

Adding some fun drama to the story is a Pinkerton detective, Charlie Siringo (Cole Hauser) who travels to Fall River to investigate for himself whether Lizzie is the murderer so many people believe she is.  The trouble with the Siringo character is I can’t decide if I’m supposed to be rooting for him to take down Lizzie or if he is just as despicable a character. It’s this question that takes me deeper into the eight-episode series and has me wondering: am I supposed to be rooting for this women who kills without a conscience, or am I supposed to be expecting her to finally get what is coming to her?  Not to spoil anything, but Lizzie does some truly despicable things, yet you can almost understand every action she takes.  She’s a survivor and wants nothing more than to protect her sister, but quite often she crosses that line.

Through the eight episodes there are several familiar faces to keep a lookout for: Jonathan Banks (Breaking Bad), John Heard (Home Alone), Chris Baur (True Blood), and several others.  What tends to take center stage in this series, though, are the unique ways Lizzie manages to dispatch of her victims, and we as viewers watch and wonder just how she will manage to get away this time.

This leads me to my most irksome issue with the show, the shift the series makes for the final two episodes. (Don’t worry, folks, I won’t spoil anything.)

While I do understand the need to progress the story, the two final episodes seem to follow a huge gap in time where we never get to see or know how the sisters managed to travel so far and seemingly start over.  When you see the series, you’ll understand the near whiplash I experienced from the sudden jolt as though you’re being thrust into an entirely new storyline.  Is this because the creative circle felt the need to wrap things up after hearing the series would not be extended for a following season, or was this always the plan?

The Lizzie Borden Chronicles may not be perfect, but it is a lot of fun if you can handle a few graphic acts of violence each episode.  In some ways I can see Lizzie as being a feminist anti-hero for some of the things she does here; it’s nice to see a woman who clearly doesn’t mind getting her hands dirty or need a man to do her dirty work.  Ricci does a remarkable job here and gives a charming yet sinister performance that has me hoping that perhaps she has not hung up her axe just yet, and maybe we will see her reprise this role again.

Brent Lorentson is a horror writer and film critic based out of Tampa, Florida. With a BA in Digital Film, he co-wrote and co-directed Scavenger Hunt. His short stories have appeared in various horror anthologies. In 2019 his short script Fertile Blood will be a part of the anthology horror film Slumber Party. He is currently working on his first novel A Dark and Secret Place set to be released in late 2019. Favorite Films: Taxi Driver, Fight Club, I Saw the Devil, The Wild Bunch, Dawn of the Dead, A Clockwork Orange, Pulp Fiction, Heathers, The Monster Squad, and High Fidelity.
Abe Vigoda 1921 – 2016 Show Me a Hero (Blu-ray)