Show Me a Hero (Blu-ray) 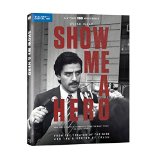 – “Justice is not about popularity…”

The title of Show Me a Hero is taken from an F. Scott Fitzgerald quote: “Show me a hero, and I’ll write you a tragedy.”  So it’s not a surprise that in the hands of David Simon — creator of an all-time great drama with The Wire — this HBO miniseries is short on conventional heroics and long on personal, political, and institutional tragedy.

“This mayor thing…when does the fun part start?”

Nick Wasicsko (Oscar Isaac) is a young, rising star on the Yonkers City Council in 1987 who is persuaded to run for mayor against long-entrenched incumbent Angelo Martinelli (Jim Belushi). The biggest issue on the council’s docket is a judge-mandated order that 200 units of public housing be constructed on the (predominantly white) east side of Yonkers. The city’s residents — who have images of crime-infested, run-down projects dancing in their heads — are violently opposed to the order and demand that the council push back against the judge (Bob Balaban). The issue ends up playing a key role in several of the city’s mayoral elections. The action in Show Me a Hero concludes in 1993, so we are treated to six years’ worth of political jockeying, broken promises, and butt-covering as council members scramble to get the stink of this housing issue off themselves.

Of course, anyone who’s seen Simon’s work (most recently HBO’s Treme) knows the former Baltimore Sun reporter likes to take a 360-degree approach to his subjects. As a result, Show Me a Hero goes well beyond the powerful people calling the shots; we also get an extended look at the folks who would actually be living in these housing units. They include Norma O’Neal (LaTanya Richardson), a home health aid whose own body starts to betray her. Doreen Henderson (Natalie Paul) grew up in the projects, was raised in the suburbs, but finds herself stuck back in public housing after a series of unfortunate events. Carmen Febles (Ilfenesh Hadera) finds that she’s just as poor in the Dominican Repulic as she is in New York and makes personal sacrifices to create a better life for her kids. Finally, Billie Rowan (Dominique Fishback) is a teen whose life takes a turn for the worse after she becomes involved with a petty criminal.

The politics and the more personal storylines in the six-part Show Me a Hero don’t start to mix until the last two episodes, and that disconnect is no accident. Towards the end of Part 4, one character remarks that the only people who seem to feel strongly about the housing issue — the miniseries opens Wasicsko being sick to his stomach with stress — are white. The show does a terrific job dramatizing the idea that the rest of these characters are too preoccupied with day-to-day survival to care about what the Yonkers City Council does. At the same time, Show Me a Hero gives equal weight to the high(ish)-stakes political maneuvering. (I mean, the Yonkers City Council isn’t exactly the White House, after all.)

Taken together, the miniseries crafts a casually devastating portrait of political cause and effect. To Wasicsko, his ability to sway the council on the housing issue is a matter of life and death for his political career. But in Part 3, we get a not-so-gentle reminder that a new public housing unit in a nicer part of town could literally help save the life of someone close to Doreen.

“I’m trying to do it as dispassionately as I can.”

Show Me a Hero is based on the 1999 book of the same name by former New York Times correspondent Lisa Belkin. It has been adapted by Simon and fellow Baltimore Sun cohort William F. Zorzi, and the duo brings a characteristically evenhanded approach to their storytelling. The best example is the portrayal of Mary Dorman (Catherine Keener, fantastic despite being saddled with a shockingly bad, old lady wig), an East Yonkers resident who strongly opposes the public housing units in her neighborhood. This is the sort of character who is often portrayed as a token racist, but Show Me a Hero lavishes her with enough screen time to explore the reasons she is opposed to the public housing project. (There are economic factors, along with racial ones.)

Each of the six episodes is expertly directed by Oscar-winner Paul Haggis, who does a fantastic job serving his massive cast. (Let’s just say this is a more low-key and nuanced exploration of class and race relations than Haggis’ Crash.) The filmmaker only gets to let his hair down, so to speak, when staging the riotous city council meetings. I’ve worked as a newspaper reporter for 10 years and covered council meetings, albeit on a much smaller scale; the cheering, jeering, and childish behavior at those things can get out of control for sure.

The expansive cast is led by the infinitely charismatic Isaac. He’s so good that it’s easy to overlook how un-“heroic” Wasicsko actually is; his voting record is nearly identical to Martinelli’s and the character is desperate for personal recognition/glory by the end of the show. Jon Bernthal (The Walking Dead) shows some nice range as rumpled, weary NAACP lawyer Michael Sussman. Alfred Molina chews the scenery splendidly as fellow councilman Hank Spallone, who truly embraces the theatrical aspect of the council meetings. Winona Ryder is also effective as Vinni Restiano, who articulates the addictive qualities political office. (It’s almost like Simon could hear us asking, “Why would anyone even want these jobs?!”) Richardson, Paul, and Fishback are each compelling as flawed heroines who persevere; Paul is gifted with the most defined arc. Naturally, we also get the expected roster of Wire vets, most notably Clarke Peters bringing his brainy bluntness as a consultant assigned to help with the integration of the public housing units.

If anything, the cast might be a little too big; including the Norma, Doreen, Carmen AND Billie storylines ends up feeling somewhat redundant. (Personally, I would’ve cut the Carmen storyline.) It feels like Simon and Co. were reluctant to exclude any of these real women’s stories and seemed happy to sacrifice a bit of storytelling fluidity. Although it doesn’t produce transcendent drama like The Wire — there are real people to serve here vs. some of the wholly original, iconic creations in that previous show — Show Me a Hero does a remarkable job of keeping this dry, downer material vibrant.

Show Me a Hero is presented in its original aspect ratio of 1.78:1. The 1080p image is arrived at with an AVC MPEG-4 codec at an average of 28 mbps. Despite being set in the not-so-distant past, Show Me a Hero is technically a period piece. That probably makes the thoroughly modern clarity and sharpness here even more striking that they would be if this were a more contemporary story. The impressive fine detail extends to the many interior scenes inside the Yonkers City Council. The palette is largely overcast, although we occasionally get some brighter, sunnier scenes when Wasicsko visits a loved one at the cemetery. Overall, this is another strong visual presentation courtesy of HBO.

The DTS-HD Master Audio 5.1 track is, not surprisingly, extremely dialogue-heavy. And that dialogue remains up front and comes through with pitch-perfect clarity. More impressively, the dialogue also remains intelligible during the raucous, perfectly-calibrated city council meetings, which bring the entire surround sound field to life. The subs make a cameo as angry residents scream and pound the floor inside council chambers. The rear speakers help make this all-encompassing circus atmosphere feel as overwhelming as it must’ve been for the council members at the time. The rears are also put to subtler use in other outdoor sequences; they provide atmospheric support during the scenes in the projects and when Carmen temporarily moves to the Dominican Republic.

Making Show Me a Hero: (6:21) This mini-doc features comments from cast and crew — writer/producer David Simon says the miniseries is about how politics is actually practiced in America — along with “Show Me a Hero” author Lisa Belkin and the real Nay Wasicsko. (Nick’s wife, played by Carla Quevedo in the show.) Director Paul Haggis mentions that the show had almost 400 speaking parts, but otherwise this “Making of” barely scratches the surface of this ambitious production. Available on Disc 2.

Show Me a Hero features all six episodes on two discs. Once again, David Simon and company have once again tackled a complex, thoroughly un-sexy subject — public housing in the late 1980s — and spun compelling drama by making it feel timeless and relatable. In this case, Show Me a Hero highlights the way a city’s supposed leaders and the people they serve can be crippled by fear (of a potential new criminal element) and money (declining property values).

You’ve probably guessed this by now, but I think Show Me a Hero is a must-watch. Then again, I think pretty much anything Simon does is a must-watch, especially since he tends to tackle themes and ideas most storytellers wouldn’t touch with a 10-foot pole.