Posted in: The Reel World by Archive Authors on February 7th, 2016 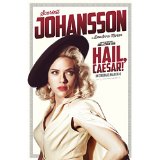 Hail, Caesar is a typical example of a Coen brothers movie, which means it is completely atypical. The Coen brothers are revered for not only being different from everyone else but also making films that are different from each other. It would easy to say there is a Coen brothers style, but you would be reaching, because the two men are committed to exploring things differently each and every time they make a movie (or produce a television show like Fargo). The most characteristic identifying factor is quirkiness and individuality. They are among the few filmmakers working in Hollywood who do whatever the freaking heck they want. What I mean by that is that the movies they make would not be allowed if proposed or pitched by anyone else. They almost take delight in coming up with properties that are daring you to dislike them. At the same time, they make movies that are ridiculously entertaining and smart. Their films are also big Hollywood productions which are usually filled with big stars begging for any part they can get. But I must stress one thing. They don’t care if you like what they do. They could give a flying fig (probably).

Hail, Caesar is about depicting a fictional version of old Hollywood sometime in the 1950’s in a studio that is something like Metro Goldwyn Mayer but called Capital Studios. Eddie Mannix (Josh Brolin) is the studio head busy running things and constantly talking to his boss in New York. He does just about anything and everything from keeping the movie stars out of trouble to changing plot points in troubled productions. He is also being courted by a corporate headhunter trying to fill a top slot at Lockheed. The film is packed with a crazy collection of characters including George Clooney, Channing Tatum, and Scarlett Johansson as three movie stars playing movie stars. My guess is they are playing Victor Mature types, Gene Kelly types, and Esther Williams types. Then there is this other fella that’s kind of, sort of playing a Roy Rogers type (Alden Ehrenreich, who steals every scene he’s in).

This movie is out-and-out silly throughout with all kinds of characters involved in ridiculous intrigue. The central plot device is the kidnapping of Baird Whitlock (Clooney) by a group of mysterious misguided intellectuals. This soon devolves into an all-out crazy, kooky “commie” comedy. The movie is crammed with great actors too numerous to mention like Ralph Fiennes, Frances McDormand, Tilda Swinton, Jonah Hill, Allison Pill, Dolph Lundgren, David Krumholtz, Michael Gambon, Clancy Brown, Robert Picardo, Christopher Lambert, Fred Melamed, Wayne Knight, and Fisher Stevens, all contributing moments of gold throughout. The whole plays out in a fractured, disjointed, and confusing manner, all owing to Mannix’s frantic attempts to get through a day as a big-shot studio head.

The Coen brothers make serious movies sometimes, but not this time. But I don’t want to suggest the wackiness is forced. It probably comes out of the truths of real people with unchecked egos and ids running rampant, mostly unhampered by such constraints as indeterminate levels of intelligence. In other words, many of these people are just plain stupid. In this case, it’s awfully fun to watch. Pure chaos and joy.