Posted in: Disc Reviews by Gino Sassani on February 6th, 2016 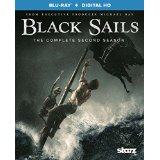 Move over, Captain Jack Sparrow. There are some new pirates on the block, and they sail into our living rooms on a regular basis in the Starz sophomore series Black Sails. The high seas adventure series combines historical people and places with the fictional characters of Robert Louis Stevenson’s classic Treasure Island. I am a little disturbed that Stevenson gets no mention in the credits for having created many of these characters. What’s up with that, Starz? Likely the material is in public domain, but credit where credit’s due, yes?

That’s right. Long before Uncle Walt even dreamed of the ride that would lead to the film franchise starring a certain eccentric pirate, Robert Louis Stevenson had created a work of fiction that established most of the pirate conventions that still exist today. From the peg-legged captain to the rum-drenched chests filled with pieces of eight, it all began in that epic story. It introduced us to the likes of Billy Bones and Long John Silver and the infamous Jolly Roger black flag. It was one of the first novels I ever read, and somewhere I still own an early edition of the work. Black Sails expands upon that universe, telling an origin story of sorts that is one of the more exhilarating shows on television.

If you are not familiar with the show, I strongly suggest you begin with season 1. I’ve also had the chance to talk with two of the main stars. You can listen to those interviews with Captain Flint (Toby Stevens) and Eleanor Guthrie (Hannah New).

Season 2 begins with Captain Flint (Stevens) and his crew somewhat marooned. Their ship is damaged, and now the gold they sought is strewn upon the beach under the guard of the Spanish. He’s lost the trust of the crew when they learn he hasn’t exactly been truthful about things and has been voted out as captain and a member of the crew. It seems hopeless to recover the gold, but Flint has a bold plan that gains them something better, at least for now. With the unexpected help of John Silver (Arnold), he intends to take not the gold, but the Spanish warship. Before long he has manipulated events to his advantage and once again rules as captain, this time of a powerful war vessel.

Meanwhile Eleanor is fighting to keep a consortium alive in Nassau. It won’t be easy. There’s a new threat in bully pirate captain Ned Low (Murphy). It leads to an alliance with Charles Vane (McGowan) in more ways than one. Of course, there’s just as much intrigue there as there is on the high seas. The partnership of Anne Bonny (Paget) and wannabe pirate captain Jack Rackham (Schmitz) is complicated by the arrival of a second woman in their number and in their bed. Max (Kennedy) has seduced Bonnie and uses that relationship to position herself for profit.

There are several stories at work here. The gold itself weaves its way through most of the characters of the show. There are plots and betrayals with so many alliances and deception to fill 100 episodes of Survivor. Everyone wants to get to the gold Flint was forced to leave behind. In the season finale we will learn who gets it, and it will certainly change the power structure at Nassau and the on high seas.

We also get to glimpse flashbacks to Captain Flint’s earlier life. We learn why he became a pirate and how his relationship with Miranda Barlow (Barnes) began. I’m not exactly happy with one of those developments, but the entire story is an important one. It not only helps us to understand Flint much better, but it will lead to yet another bold move to attempt reconciliation between England and the pirates. It all leads to Charleston, where his attempt to return the daughter (Young) of an important man from his past turns tragic.

The series is also an origin story of sorts for Treasure Island‘s Long John Silver. He becomes quite the unexpected advocate for Flint and earns power among the crew by his ability to tell compelling stories. For now, he’s used them to assist Flint. Readers of the classic novel know what he’ll use those powers for in the future. We learn how he gets the famous peg leg. Luke Arnold and Toby Stevens have developed quite the chemistry with these two characters. They have become quite compelling to watch and are used in clever ways to turn the story in unexpected directions. In many ways this has become the heart of the show’s storytelling.

As much as the action on the high seas provides a lot of the show’s action, there is something to be said for the three women at Nassau who attempt to build their own fortunes and legends. Eleanor Guthrie has much less to do this season, and it’s usually being stuck between two factions. While her role is certainly crucial, it has been underused this season. The character of Max has become the central female lead at Nassau, and I just don’t find her very likable.

Even with so many interesting characters and inspired performances you simply can’t overlook the production designs on this series. They’ve actually built most of these sets and even the ships. Of course, there’s pretty heavy use of CGI for extensions and many of the pirate battles, but a lot of this is also real. There is an incredible attention to detail here that truly brings you into this time and place. The cinematography makes excellent use of these carefully designed sets to deliver some of the highest production values on television. You will be amazed at how real this all looks and feels.

Each episode is presented in its original broadcast aspect ratio of 1.78:1. The 1080p image is arrived at with an AVC MPEG-4 codec. This high-definition image presentation is nothing short of spectacular. Colors are bright and vivid when it comes to bright daylight or the high seas. The water is a brilliant mixture of blues and greens with a depth that just draws me in. Black levels are deep and true. There is much to be found in the shadow world of this show, and pirates don’t exactly dress in bright garments. Midnight attacks on ships reveal wonderful shadow definition that allows you to see detail even under the blackest of conditions. There are four episodes per disc on the first two discs, so there have been a few moments of digital noise but never anything long-lasting or distracting from the beauty of this series.

The Dolby Digital TrueHD 7.1 track brings the amazing image to life even more, if that’s possible. The surrounds are particularly impressive on the ships. You’ll be surrounded by the smooth smash of water against the haul and the creaking of rope lines and wooden planks. Darken your room and you can place yourself within the bowels of one of these ships. Dialog is always clear and well placed. The score often rivals that of a film. All of these factors combine to make this one of the most atmospheric television experiences you’re likely to have.

Inside The World Of Black Sails: (21:32) This feature is basically a season summary. Cast and crew talk about the changes in cast and story. There’s an episode-by-episode analysis.

Man O’ War: (4:10) They had to build a different ship. The Spanish ship is bigger and has more decks and guns. This feature shows the construction and design of Flint’s new ship.

History’s Influence: (4:35) This plays out like a short documentary on the pirate era. There are historians to offer analysis and a narration complemented by clips from the show.

High Seas Action: (5:08) This one covers the stunts of the show.

Starz hasn’t been long in the original scripted drama game. You can’t tell by watching Black Sails. The popularity of the Johnny Depp films even when they haven’t quite delivered makes it clear that there is an appetite for a pirate drama on television. Credit Starz for not only recognizing that need but for making the decision to do it right. These are bloodthirsty men with ambitions that lead to incredible actions. In the era they were considered monsters. That would still be true today, however: “Civilization needs its monsters.”

Gino Sassani is a member of the Southeastern Film Critic's Association (SEFCA). He is a film and television critic based in Tampa, Florida. He's also the Senior Editor here at Upcomingdiscs. Gino started reviewing films in the early 1990's as a segment of his local television show Focus. He's an award-winning recording artist for Omega Records. Gino is currently working on his 8th album Merchants & Mercenaries. Gino took over Upcomingdiscs Dec 1, 2008. He works out of a home theater he calls The Reel World. Favorite films: The Godfather, The Godfather Part II, The Body Snatcher (Val Lewton film with Karloff and Lugosi, not the pod people film), Unforgiven, Gladiator, The Lion King, Jaws, Son Of Frankenstein, The Good, The Bad And The Ugly, and Monsters, Inc.
Falling Skies: The Complete Fifth Season Hail, Caesar!