Posted in: No Huddle by Brent Lorentson on February 9th, 2016 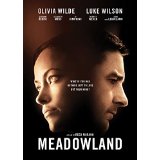 Tragedy has a way of taking a toll on us in a way that is far more devastating than a physical injury.  Some tragedies occur, and they go on to haunt us till we have passed on from this mortal realm.  Meadowland is a small film that dares to take a peek at the dangerous repercussions that can follow depression when not properly treated.  Sure, we’ve seen films before that show the aftermath of a family who has tragically lost a child, but Meadowland is a film that isn’t afraid to show us the ugliness of depression and the things people are willing to do in an attempt to be who they were once again before the tragedy ever took hold.

Phil (Luke Wilson) and Sarah (Olivia Wilde) are the husband and wife who seem to have the perfect life.  Phil is an officer for the NYPD and Sarah is a public school teacher, both responsible adults who are caretakers of the community in their own unique ways, so the thought of them having their son kidnapped seems all the more unthinkable.  His disappearance is nothing dramatic but simply losing sight of him as used the restroom while making a pit stop for gas.  It’s an unthinkable nightmare I can imagine so many parents have thought about and hopefully never have to endure.

One year following their son’s disappearance: from the outside Phil and Sarah seem to be a couple holding it together, but the reality is that the two are about to combust.  Phil is doing what he can by going to support meetings, while Sarah seems aloof and goes on nightly walks through the city.

When Sarah takes a special interest in one of the students at her school, one can hope perhaps helping this young boy can help fill the void in her heart, and for a little while it seems to.  Adam (Ty Simpkins) is the young boy Sarah takes a shine to, and the resemblance to her own son can’t be mistaken.  She watches as students make fun of him and how his foster parents do little in the way of parenting him, and for Sarah she sees a child for her to love.  What starts off as sweet as she spends time with Adam starts to go into a grey area as she follows his foster mom to see what kind of a life the mother leads.  Well, it’s not a good one.

There is another student at the school who is even more troubled that Sarah discovers is also a cutter.  The decisions on Sarah’s part from this moment on are insane but are irrational decisions she is making out of grief and no longer taking her medication.  As for Phil, we get to watch him as his drinking continues and his late night excursions to the gas station where his son disappeared.  Basically if their son were to return safely, maybe these two wouldn’t be fit to be parents till after a long stint of extreme therapy.

What director Reed Morano has tapped into here is a very raw look at grief that is captured honestly and painfully.  The film does show some restraint, but it is depressing enough as it is.  Where the film does lose some of its steam is in the film’s final act, where there are decisions made by Sarah that no longer left me sympathetic toward her but instead had me loathe her.

While the film certainly does tread in familiar territory, it is still a fresh and grim look at tragedy within the family unit.  Giovanni Ribisi, Elisabeth Moss, and John Leguizamo help fill out an ensemble cast that delivers some really intense performances. While this is a far cry from the Hallmark movie of the week to raise your spirits, this is good family drama that is worth a look for the performances alone.

Brent Lorentson is a horror writer and film critic based out of Tampa, Florida. With a BA in Digital Film, he co-wrote and co-directed Scavenger Hunt. His short stories have appeared in various horror anthologies. In 2019 his short script Fertile Blood will be a part of the anthology horror film Slumber Party. He is currently working on his first novel A Dark and Secret Place set to be released in late 2019. Favorite Films: Taxi Driver, Fight Club, I Saw the Devil, The Wild Bunch, Dawn of the Dead, A Clockwork Orange, Pulp Fiction, Heathers, The Monster Squad, and High Fidelity.
Tuesday Round Up: February 9, 2016 The Man From U.N.C.L.E.: The Complete Second Season