The Man From U.N.C.L.E.: The Complete Second Season

Posted in: Disc Reviews by Gino Sassani on February 9th, 2016 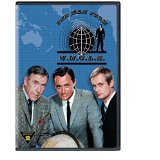 Say Uncle. That’s U.N.C.L.E., otherwise known as the United Network Command for Law and Enforcement. Starting in 1964, The Man From U.N.C.L.E. was one of a flurry of shows to take advantage of the new James Bond craze. It featured many of the same elements as the super-spy films. You had sophisticated spies in tuxedos. There were plenty of gadgets. And there were constant threats of world domination, mostly from the evil counter organization, THRUSH. The two top spies for the good guys were Napoleon Solo (Vaughn) and Illya Kuryakin (McCallum). The Bond references were never subtle and always intentional. Ian Fleming himself consulted on the show and named Napoleon Solo after a Bond character. Together Solo and Kuryakin would travel around the globe, saving the world from almost certain doom. The series ran for four years. In 1983 there was talk of bringing the show back. Apparently the two stars were still up to the task, and both could have used the work. Thus was born the television film and potential pilot: The Return Of The Man From U.N.C.L.E.: The Fifteen Year Affair. The pilot didn’t take off, and the project appeared dead until it was revived once again as a feature film reboot of the franchise ala Mission: Impossible. There was also a short-lived spin-off called The Girl From U.N.C.L.E. that starred Stephanie Powers as the first female field agent for the organization.

When the show began, it was more of a one-man mission as Solo lived up to his name. The first few episodes saw little of Kuryakin, who was more of a base analyst. The show was also failing miserably in the ratings. It was going up against two powerhouse shows in McHale’s Navy and The Red Skelton Hour. The network was ready to pull an early plug on the spy show. Instead, there were two fateful changes made. The show was moved to a new timeslot, eventually landing in the Friday timeslot where it flourished. The other change brought David McCallum’s character into more of a partnership with Solo. Solo would remain the lead, but the team created a nice chemistry that would carry the series for the rest of its run and beyond.

There were two rather notable changes to the show in the second season. The series moved from black and white to color. There was also a decided move toward more of a camp lightness for many episodes. Batman was popular at the time, and you started to see the kinds of devious but impractical methods of disposing of our heroes. There were pendulums in Egyptian tombs and a lot of knockout gas, a rather overused element on Batman.

The format remained virtually unchanged for the show’s life. The episode titles all ended in the word “affair”, as did the mission files on the show itself. Some threat, usually from THRUSH, would become known, and the two spies would be sent around the globe to deal with it. As much as the Bond films were on everyone’s mind, Man From U.N.C.L.E. didn’t rely quite so much on the gadgets, obviously dealing with a television budget. The most notable was the cigarette pack that doubled as a communicator radio. The headquarters featured metal walls that slid open and closed like something on the bridge of the starship Enterprise. The offices were loaded with computers that took up a great amount of space. It really wouldn’t appear very high-tech at all today. Even the communicator is a bulky design compared to today’s cell phones. Obviously, the Cold War stories and the dated styles and tech will stand out when viewed today. But I was surprised at how easy it was to get into the stories and characters so that I could treat it more as a period piece than a dated one. That’s the mark of a truly great television show.

The second season featured more than its fair share of memorable episodes. The season begins with the two-part episode Alexander The Greater Affair. It stars a very young Rip Torn as Alexander, who wants to outdo his namesake Alexander The Great. He sets out to break all of the 10 Commandments, and U.N.C.L.E. is in the way. The episodes would be combined as a movie later, and new footage would be added starring Yvonne Craig to pad the story and running time. The Re-Collectors Affair covers the subject of the Nazi theft of works of art. There just may be more to their actions than art. The episode stars Alice’s Vic Tayback. David McCallum ends up marrying his guest star Jill Ireland from The Tigers Are Coming Affair. Unfortunately for McCallum, he introduced her to Charles Broson on the set of The Great Escape, and Ireland ended up marrying Bronson until she died of breast cancer in a rather public fight she had with the disease, bringing awareness in her final years. In The Children’s Day Affair finds our heroes at a private school for kids that are actually being trained as young THRUSH agents. The two-part Bridge Of Lions Affair really brings on the camp. THRUSH is using stolen kitties to test an anti-aging formula that turns cats into kittens. The villain gets too big a dose and ends up a kid with a moustache. The Nowhere Affair introduces us to Capsule B, which gives an agent amnesia to be taken upon imminent capture. Solo ends up in the hands of THRUSH without his memory. They try to activate it by getting him to fall for a female agent. Looks like THRUSH had pretty good intel on Solo. Martin Landau delivers some career foreshadowing in The Bat Cave Affair. He plays a self-styled vampire count complete with cape and Hungarian accent. Of course, Landau would go on to play Bela Lugosi in Ed Wood, where he earned a well-deserved Oscar in 1995 for Best Supporting Actor. In the episode he runs THRUSH’s Operation Nightflight, which involves bats and their erroneously attributed radar abilities.  But the show was at its best with “saving the world” missions. To keep you guessing, the end credits always finished with a thanks to the United Network Command for Law and Enforcement for their cooperation in making the show.

The show attracted some serious talent, both in guest stars and crew. Keeping with the Batman theme, that show’s King Tut, Victor Buone appeared as an ambitious THRUSH colonel who loses $10 million because of U.N.C.L.E. in his quest to dominate Africa. That episode also saw Hill Street Blues star Daniel J. Travanti as, what else, but a young rural police officer who wants a promotion so he can marry his sweetheart. He’s also looking for a husband for her older sister to satisfy the local custom that must see the older girl married first. Of course, his plans become a thorn in the side of our heroes. Other notable guests included (the Federation’s best starship engineer) James Doohan, James Hong, Batman’s Aunt Harriet Madge Blake, (Harry Mudd himself ) Roger C. Carmel, (The Master Of Fear) Vincent Price, Michael Ansara, Angela Lansbury, Claude Akins, Joyce Jameson, Vera Miles, (Dr. Zaius from Planet Of The Apes)  Maurice Evans, (Khaaaaaaaan) Ricardo Montalban,Whit Bissell, Eve Arden, and Paul Winfield.

“Isn’t that just like a woman? Always trying to redecorate.”

The season includes The Moonglow Affair, which served as a backdoor pilot for The Girl From U.N.C.L.E. There would be a few changes from this episode, however, for that spinoff. April Dancer, the girl from U.N.C.L.E., would end up played by Stephanie Powers. Here she’s played by Mary Ann Mobley. Her handler/partner is Mark Slate, played here by Three’s Company’s Norman Fell, but in the new series and later on this show by Noel Harrison. The spin-off would only last a single season.

Both Robert Vaughn and David McCallum had great careers in the years since The Man From U.N.C.L.E. Vaughn would play a similar role in The Protectors. This time he was a freelance crime fighter. He would play a killer twice on Columbo and had several recurring roles in other shows. McCallum would end up in the short-lived The Invisible Man series in the 1970’s. He was Steel in Sapphire & Steel. But most fans now know him for his role of Dr. Mallard, “Duckie” in NCIS. Thirteen years, and that show is still going strong.

There are 30 episodes on 10 discs. Again there are no extras, and the image quality is pretty good for a 50-year-old television show. There’s a lot to watch here for one review. But I can honestly say, “I wouldn’t have missed this excursion for anything.”

Gino Sassani is a member of the Southeastern Film Critic's Association (SEFCA). He is a film and television critic based in Tampa, Florida. He's also the Senior Editor here at Upcomingdiscs. Gino started reviewing films in the early 1990's as a segment of his local television show Focus. He's an award-winning recording artist for Omega Records. Gino is currently working on his 8th album Merchants & Mercenaries. Gino took over Upcomingdiscs Dec 1, 2008. He works out of a home theater he calls The Reel World. Favorite films: The Godfather, The Godfather Part II, The Body Snatcher (Val Lewton film with Karloff and Lugosi, not the pod people film), Unforgiven, Gladiator, The Lion King, Jaws, Son Of Frankenstein, The Good, The Bad And The Ugly, and Monsters, Inc.
Meadowland Maude: Season 3