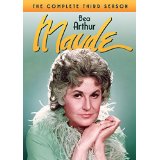 Maude was one of those shows that was willing to bring serious issues and controversial themes into the show. Of course, the season is most notable for the departure of Esther Rolle as Florida for her own series. It’s really a carry-over from All In The Family. The difference is that Maude is never quite as likable as Archie could be even with his faults. The series was at its best when Maude was confronted with her own hypocrisy. Bea Arthur handled those moments best. Enter new British housekeeper Mrs. Naugatuck played by Hermione Baddeley. She would become a better sparring partner for Maude. The new housekeeper didn’t mind offering her own opinions even when they did not agree with Maude’s. It was a good shake-up for the series and gave Maude another foil at times. But it was the special guest star that opened the season that draws the most attention when one is talking about season 3. The Duke himself John Wayne plays himself as the season begins. Turns out Arthur is his number one fan and The Duke takes a detour from his movie publicity tour to visit Arthur. Things go side-ways when Maude ends up in an arguement with him over, what else? Women’s lib.

The Kiss brings up the subject of infidelity once more when Maude catches Walter and Vivian in a smooch. Another serious subject takes center stage in Walter’s Heart Attack. It’s not just the titular life-threatening event but where Walter was when it happened. Maude becomes a wreck when a psychic tells her there’s another husband in her future in All Psyched Out.

Gino Sassani is a member of the Southeastern Film Critic's Association (SEFCA). He is a film and television critic based in Tampa, Florida. He's also the Senior Editor here at Upcomingdiscs. Gino started reviewing films in the early 1990's as a segment of his local television show Focus. He's an award-winning recording artist for Omega Records. Gino is currently working on his 8th album Merchants & Mercenaries. Gino took over Upcomingdiscs Dec 1, 2008. He works out of a home theater he calls The Reel World. Favorite films: The Godfather, The Godfather Part II, The Body Snatcher (Val Lewton film with Karloff and Lugosi, not the pod people film), Unforgiven, Gladiator, The Lion King, Jaws, Son Of Frankenstein, The Good, The Bad And The Ugly, and Monsters, Inc.
The Man From U.N.C.L.E.: The Complete Second Season Convergence (Blu-ray)