Posted in: No Huddle by Brent Lorentson on February 15th, 2016 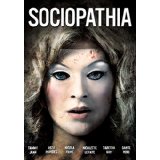 When it comes to horror films about relationships, we’ve all gotten used to the same old story where a jilted ex-lover isn’t ready to let things go and violence and mayhem ensues. What is actually refreshing about Sociopathia is that we get a love story mixed with some graphic horror while seeing the story unfold through the eyes of a mentally unhinged young woman.  While Sociopathia may not be in the same league as Fatal Attraction, it is still a film worth watching for those who are fans of trashy, exploitive horror films.  And with Valentine’s Day right around the corner, this maybe the feel-good flick you single folks may be looking for to validate your single life.

Mara (Tammy Jean) is a single lesbian who is struggling in the dating world while also juggling her career as a film effects artist.  It’s very early on that we see Mara isn’t right in the head after we see her kill her lover and then go on to treat her in a very doll-like fashion, all while continuing to converse with the corpse as though she were still alive.  While this is effective in showing us how unstable Mara is, this turns out to be a case of too much too soon.  Once we’ve seen how far off the deep end she is, there really isn’t anywhere else for this character to go.

What will hook the viewers with this release is simply the nudity and the gore.  I wish I could say there was more on display here, but really what we get here is violent sequence after violent sequence where Mara is killing someone for one reason or the other.  When she commits these crimes she has a costume and mask that she uses, but it just doesn’t make much sense only because she seems to be an impulsive killer.

Even with the attempt at giving Mara a love interest in the form of Kat (Asta Paredes), we get some moments where the film is attempting to give our character some depth as she tries to deal with her mental struggles, but it’s never enough.  Since the viewer already knows all the secrets Mara has there is no real suspense or mystery here, because we know Mara just doesn’t want to get caught.  Had the reveal been saved for the third act rather than the first 15 minutes, there could be a nice little suspense film here.  Very early on while watching this, I kept thinking there was a lot of influence from the film May, but perhaps that’s just me.

This is low-budget horror that will find its audience most likely through Netflix.  Bad acting and gratuitous nudity has me feeling this is catering to teenage boys while they’re up late at night.  It definitely has an old school Troma feel which I can appreciate, while it does attempt to be a serious horror film.  No one goes into this kind of film with high expectations, and that is a good thing because for what it is, Sociopathia is a fun little movie even with its flaws.

As a side note, there is an option on the DVD where you can watch the film in B&W, it didn’t help sway my opinion of the film too much, but it is still a fun little bonus.

Brent Lorentson is a horror writer and film critic based out of Tampa, Florida. With a BA in Digital Film, he co-wrote and co-directed Scavenger Hunt. His short stories have appeared in various horror anthologies. In 2019 his short script Fertile Blood will be a part of the anthology horror film Slumber Party. He is currently working on his first novel A Dark and Secret Place set to be released in late 2019. Favorite Films: Taxi Driver, Fight Club, I Saw the Devil, The Wild Bunch, Dawn of the Dead, A Clockwork Orange, Pulp Fiction, Heathers, The Monster Squad, and High Fidelity.
DeadPool McHale’s Navy / McHale’s Navy Joins The Air Force