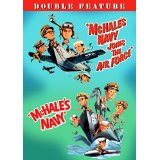 McHale’s Navy actually started life as a dramatic episode of Alcoa Premiere, hosted by Fred Astaire. It was April of 1962 when Ernest Borgnine would introduce the audience to his most famous television role. The network loved the character but not the show’s format. By October of the same year the television series would debut not as a serious drama but a half-hour comedy. Who knows how a dramatic series would have performed? The comedy became a classic. People couldn’t get enough of the stuff, and two movie versions were produced during the show’s four-season run. These films have been collected here on a single DVD release.

The films, like the series, follow the World War II exploits of the United States Navy vessel PT-73. Ernest Borgnine is Lt. Commander Quinton McHale. He’s pretty much the ringleader for the ship full of misfits and schemers. He was willing to look the other way and even lead many of their cons and schemes. Gambling in many forms was the usual trouble for the men. McHale would put the hammer down if they went too far. He also attempted to protect his men from the ship’s captain Wallace B. Binghamton, played by Joe Flynn, and his second in command Lt. Carpenter, played by Bob Hastings. They worked hard to catch the guys in the act and ship them out, preferably to the brig. The crew XO was Ensign Parker, played hilariously by Tim Conway. Too much of an idiot to be respected as a commander, he was still beloved, particularly by McHale. Carl Ballentine was Gruber, one of the head honchos in the con department. He was the shifty con artist always trying to separate the men from their money. The crew also included a Japanese deserter Fuji (Yoda) who masqueraded as a POW in case he were spotted by the enemy. Somehow they manage to protect the South Pacific in between poker games and rigged contests.

The show features two very distinctive kinds of comedy. Ernest Borgnine delivers the verbal comedy and wonderful timing. If you can’t dazzle them with brilliance, baffle them with you-know-what. Tim Conway, on the other hand, was the master of physical comedy. He shared a lot in common with Don Knotts. He could stumble around with the best. A loaded gun or a tree branch tangled in his feet was enough to set him on his way. Conway was known for getting his co-stars to break up laughing, a trait he made famous later on the Carol Burnett Show. Joe Flynn was no slouch in physical comedy himself. He was often at the end of some misfortune supplied by the boys. It might be a collapsed wall or a jeep run amuck. Binghamton was usually on the bad side of such pratfalls. Together the two were a nonstop laugh riot.

Parker comes to the aid of a young French girl who is being manhandled by the port’s most prominent citizen. Of course, it backfires, and Parker ends up with the scantily-clad girl on the ship and heading straight for a dock with said bad guy. Now the crew has one week to raise $4,000 to pay the damages, or Parker’s going to jail. McHale can get the money, but it’ll mean marrying the local gambling parlor queen. All seems hopeless until the crew embarks on a rescue mission that ends up netting them an alleged champion racehorse. Winning an upcoming race can keep Parker free and help the guys keep an orphanage funded. Of course, it all goes awry, but the crew manages to capture a Japanese sub.

Ernest Borgnine is AWOL for this film. He was filming The Flight Of The Phoenix during production of this film. The rest of the cast is intact. Still, Borgnine’s presence is missed.

Binghamton mistakes a general’s son and Air Force pilot as a Soviet spy and has him taken away by the Russians. Parker ends up in his uniform and is mistaken for the young Captain Harkness (Bessell). The lies get deep, and he ends up having to play along in the Air Force. The real guy is a womanizer who was in a ton of trouble that Parker has to deal with. With McHale not present, Joe Flynn’s Binghamton actually goes from foil to one of the conspirators this time.

This one is the weaker of the two, but there’s an entertaining finish with Binghamton and Parker hanging from a plane in a Jeep amidst the Japanese fleet. Of course, the military’s been trying to get their location — the fleet, not the flying Jeep.

These films were not the usual cobbled-together episodes that most television shows put together for so-called films. These were made as feature films with color and widescreen presentations, preserved here. The two films are entertaining enough for me to say, “Let me have it.”

Gino Sassani is a member of the Southeastern Film Critic's Association (SEFCA). He is a film and television critic based in Tampa, Florida. He's also the Senior Editor here at Upcomingdiscs. Gino started reviewing films in the early 1990's as a segment of his local television show Focus. He's an award-winning recording artist for Omega Records. Gino is currently working on his 8th album Merchants & Mercenaries. Gino took over Upcomingdiscs Dec 1, 2008. He works out of a home theater he calls The Reel World. Favorite films: The Godfather, The Godfather Part II, The Body Snatcher (Val Lewton film with Karloff and Lugosi, not the pod people film), Unforgiven, Gladiator, The Lion King, Jaws, Son Of Frankenstein, The Good, The Bad And The Ugly, and Monsters, Inc.
Sociopathia Steve Jobs (Blu-ray)