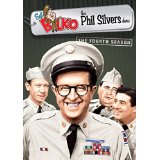 But not for long. Phil Silvers was aptly named. If anyone in show business had a silver tongue, it was Phil. He started, like most comedians of the era, in Burlesque and Vaudeville. There he honed the natural talent that would make him one of the first true television stars in the industry. With The Phil Silvers Show he introduced us to the character of Sergeant Bilko. From 1955 to 1959 Silvers and his Bilko character would take the television landscape by storm. In 1956 the show became the very first series in television history to win three Emmy Awards in a single year. That year the wins came in the Best Comedy Series, Best Actor (Silvers) and Best Director. The last honor went to the show’s creator, Nat Hiken.

The Phil Silvers Show would also become one of syndicated television’s first mainstays. In syndication it was called Sergeant Bilko. It didn’t matter if the show was named after Silvers or Bilko, for they were truly one and the same. Silvers brought his own strong stage presence to the character of Bilko. He was a sergeant in the Army. He was originally stationed at the fictional Fort Baxter in the fictional town of Rosewood, Kansas. The final season begins with Bilko getting the camp to move to Camp Freemont in Grove City, California on the trail of gold. Of course, it doesn’t work out, but his scam does lead to the base personnel moving to California.

He ran the platoon who worked the motor pool. Suffice it to say that there was little motor pool work being done, and it’s a miracle any of the vehicles still ran by the time the show reached its fourth and final season. For you see, Bilko was more interested in his latest moneymaking scheme than performing his Army duties. And even though he usually touched each and every man in his unit for their last cent, they loved their sergeant. He would have their backs, particularly if there was a percentage to be made in the process.

Bilko’s first partner in his cons was Henshaw, who was played by Allan Melvin. Melvin would go on to play Sam the butcher on The Brady Bunch and Barney Heffner on All In The Family and Archie Bunker’s Place. Bilko’s second henchman was Rocko Barbella (sound familiar?). Rocko was played by Harvey Lembeck. Together they ran the platoon’s Welfare Fund that was intended to be there when the guys needed some extra money. Of course, it always ended up financing a Bilko scheme or vacation. The platoon was filled with colorful pigeons for Bilko to fleece. There was the lovable Doberman, played by Maurice Gosfield. Doberman was the chubby, naive member of the unit as well as the most lovable of the characters. You might remember Gosfield as the voice of Benny in the Top Cat cartoons. Ritzik was one of Bilko’s steady poker players and a man he could always beat. He was played by Joe E. Ross, who was best known for Car 54 Where Are You. He was famous for his trademark OOOH OOOH expression. Ritzik was the company chef and also incredibly superstitious. That was always a nice in for Bilko when it came to his schemes. Bilko’s foil was the base commander Col. John T. Hall, played by Paul Ford. He was always one step behind Bilko, and it caused him endless heartache. The relationship was very much akin to Yogi Bear and the park ranger. Deep down Hall had a certain respect for Bilko, but it was his job to stop his antics.

The move to California was a smart one. It put Bilko only a couple hours drive from San Francisco and also closer to Hollywood. The move allowed for Bilko to run into more celebrities. Bing Crosby’s sons make an appearance, and Bilko discovers he has a family connection to the Crosbys. He ends up imagining he was Bing and the boys were his own sons while Lindsay Crosby imagines the brothers were Bilkos. The season also features the McGuire Sisters, whom Bilko tries to split up when they arrive to do a show. He figures he can represent them each individually for three times the money. The Munsters’ Grandpa Al Lewis shows up three times. Once he’s a bar owner, and twice he’s a mobster. Lucille Ball makes a very short cameo, and she’s literally a scream.

Bilko was very much a reflection of Phil Silvers. Silvers was a self-professed gambler, as was Bilko. It once even saved his life. Bilko was supposed to share a car ride with his buddy Bugsy Siegel, but Bugsy couldn’t drag him away from the tables. That happened to be the night that an attempted hit on the mobster resulted in his car getting riddled with holes. Silvers would declare that he would have been killed if not for his gambling.

There was an attempt to revive the show in 1963. The character’s name and position were changed. This time Silvers was Harry Grafton, who worked in a factory where he pulled pretty much the same stunts he pulled as Bilko. The New Phil Silvers Show lasted only a season.

Silvers’ trademarks were his iconic glasses and used-car-salesman voice. He could charm the fur off of a bear. It was said that you could get fan mail to his home simply by drawing the glasses on the envelope. Both are prominent features of the show. You get all 36 episodes on four discs which also include a Pontiac promo from the cast of the show. You get an episode of The New Phil Silvers Show and Phil’s final television interview. But it’s all over from here. “Time to say goodbye Bilko.”

Gino Sassani is a member of the Southeastern Film Critic's Association (SEFCA). He is a film and television critic based in Tampa, Florida. He's also the Senior Editor here at Upcomingdiscs. Gino started reviewing films in the early 1990's as a segment of his local television show Focus. He's an award-winning recording artist for Omega Records. Gino is currently working on his 8th album Merchants & Mercenaries. Gino took over Upcomingdiscs Dec 1, 2008. He works out of a home theater he calls The Reel World. Favorite films: The Godfather, The Godfather Part II, The Body Snatcher (Val Lewton film with Karloff and Lugosi, not the pod people film), Unforgiven, Gladiator, The Lion King, Jaws, Son Of Frankenstein, The Good, The Bad And The Ugly, and Monsters, Inc.
WKRP In Cincinnati: The Final Season Saints & Strangers