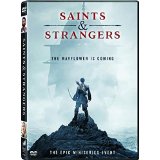 “They called us Pilgrims, but today we are thieves. We trust in God’s design. Our faith helps us to cross an ocean. Faith and a contract with strangers, The Merchant Adventure Company, without whose support we could not afford the journey…. 102 passangers arrived in the New World, guided by the Lord. But there were some things God neglected to mention.”

Everyone knows the good ship Mayflower. We all know who the pilgrims were. Every November school children all over America reenact the first Thanksgiving in pageants more myth than history. We can hardly expect anything more from a Hollywood production on the events surrounding those events. If you’re not looking for an historical lesson, this will be an interesting and somewhat entertaining take on the material.

Ray Stevenson leads a large cast as Stephen Hopkins. He’s a key member of the Mayflower travelers to America. The ship is headed for Virginia where they have a charter to start a new colony. There are some bumps along the way. His pregnant wife was intended to have their son in Virginia, but he arrives aboard the ship mid-voyage. Troubles also lead the ship far to the north and the shores of what would become Massachusetts. A new deal was necessary to accommodate the change in plans and locations leading to the famous Mayflower Compact. The series spends time on that document but misses out on the key teaching moment. The compact set forth that all governments in the New World would be freely elected, a bold move for a group of British citizens here on a charter. But that boldness would be the kernel that would lead to a revolution and independence. It’s a fatal flaw here.

You would expect a 3-hour event on the subject to give us a rather intimate look at the trials and issues that made those first months such a struggle. Instead the series is played out almost exclusively as a series of meetings both within the group and with the various native peoples they encounter. I felt like I was watching an early American version of The Godfather, to be honest. The dialog and body language look far more like a mob sit-down than what likely happened. It’s this focus on these encounters and not the life in the colony itself that when blended with the ultra-stylization make this less informative than it could have been and certainly less entertaining than it should be.

I’ll give some props to the production design team when it comes to props and costumes. There’s a ton of authenticity that only makes the actors’ performances that much stronger. The same can’t be said of the location sets and cinematography. Frankly, it was uninspiring. It’s obvious that the crew was concerned enough about the lackluster backgrounds and sets that the show relies too heavily on small, close framing. I get the impression that the thinking was more along the lines of the old full-frame television philosophy. It’s small and limited thinking that shows.

The only real positive here is that a couple of the cast delivered rather inspiring performances. Ray Stevenson doesn’t know how to phone it in, but I got the impression even he felt a bit limited here. Ron Livingston is another relative standout. He’s terribly underused here. A huge disappointment is Kalani Quaypo, who plays a rather pivitol role as Squanto, an English-speaking native who uses the language advantage for his own intrigue and manipulates all the parties into his own agenda of vengeance. If you’re going to create such a vital part and move your focus away from the early pilgrim life, you need to have a strong lead. Didn’t happen.

The final flaw lies in the name. The term “saints and strangers” refers to the split in the ship’s passengers. About 40 of the settlers were Protestant-Separatists, very much puritans. Strangers was their name for those who did not belong to that group. Most of these were families just looking for a new beginning or even minor criminals hoping for a fresh start. The names are thrown around, but we never see that split explained, only exploited as a vehicle for conflict. The title suggests to me the focus of the material. I was terribly wrong making that assumption.

With the cooperation of National Geographic, I expected something more historically correct. At the very least I was looking for an intimate piece on the pilgrims’ survival. If you pop this one in with those same expectations?  “How should I put this, but things are about to get worse.”

Gino Sassani is a member of the Southeastern Film Critic's Association (SEFCA). He is a film and television critic based in Tampa, Florida. He's also the Senior Editor here at Upcomingdiscs. Gino started reviewing films in the early 1990's as a segment of his local television show Focus. He's an award-winning recording artist for Omega Records. Gino is currently working on his 8th album Merchants & Mercenaries. Gino took over Upcomingdiscs Dec 1, 2008. He works out of a home theater he calls The Reel World. Favorite films: The Godfather, The Godfather Part II, The Body Snatcher (Val Lewton film with Karloff and Lugosi, not the pod people film), Unforgiven, Gladiator, The Lion King, Jaws, Son Of Frankenstein, The Good, The Bad And The Ugly, and Monsters, Inc.
Sgt. Bilko / The Phil Silvers Show: The Final Season A.D. The Bible Continues (Blu-ray)