Death Row – A History of Capital Punishment in America 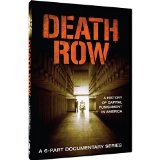 “Peering out from the dark shadows of America’s death row are the faces of evil. The faces of murderers. Men and women who commot the most heinous of crimes. Some elude capture for years, even decades. But eventually, these lowest forms of humanity find themselves on death row awaiting their final fate… execution.”

There appears to be a lot of controversy when it comes to the death penalty in the United States. I say appears, because even with all of the debate the polls show that Americans overwhelmingly support capital punishment. In fact, only 37% of Americans were opposed in the Gallup 2015 poll. That doesn’t mean there aren’t some concerns shared by most of us. In 1972 capital punishment was suspended by the Supreme Court in a landmark decision called Furman vs. Georgia. Contrary to popular belief, the Court did not find the death penalty to be unconstitutional. An “expert” in this series even makes that mistake. It found there was a lack of “fundamental fairness” in the sentencing guidelines. The worry was that minorities were getting a higher percentage of death sentences. Four years later in Gregg vs. Georgia, the Court was satisfied that such issues were addressed, and the death penalty was reinstated in most of the states in the country. We still have concerns over guidelines and methods of execution. No one agrees with the often decades it takes for most executions to actually happen. We may not agree with methods or system, but over 60% of us still support the practice.

Death Row is a 6-episode series dealing with capital punishment in America. In what could have been a fascinating and educational topic, I have to say this show drops the ball in almost every way. It starts with the narration by Tom Kimball. He’s incredibly flat and dry. There’s almost an academic quality to his voice. He rarely engages in any inflection and appears to be reading a script for the first time. The next issue deals with what is not there. There are no interviews with anyone connected with the practice outside of one prison guard who conducts tours for a defunct prison. There are zero soundbites from the killers or the people who worked in the business of capital punishment. The closest we get are stock photos and maybe short clips of stock footage and establishment material that is used over and over again.

So, what do you get? You get soundbites from commentators that include: Robert Kerrler, a crime writer who wrote Deadly Dozen: America’s 12 Worst Serial Killers. Kirk Gill, another true crime writer. Jack Levin is a criminology professor at Northwestern University at Boston. Michael Radler is a professor of sociology at the University Of Colorado. They really tell us little about the actual death penalty phase of the cases. Instead, they spend the majority of the time on the stories of the crimes and the killers. Their executions are really just a coda to each story, often ending on a shot of the same gas chamber or electric chair no matter when or where the case originated.

There is information to be gained here. The first episode provides a pretty good timeline of the evolution of capital punishment over 400 years from the first settlers and the Salem Witch Trials through the various changes in technology and methods. The next two episodes deal with serial killers. The usual Bundy and Gacy stories are told here. You do have to give some credit, as the episodes do touch on some little-known killers going back 100 years or more. The fourth focuses on cases made famous by the executions themselves. Unfortunately, most of the time is still spent on the people and case. The fifth explores the use of capital punishment by the federal government. Cases like the Lindburgh kidnapping and the Timothy Mcvay bombing dominate this episode. The final episode reveals famous last meals and words. Some of the most bizarre stuff can be found here.

There is erroneous information here. The Furman vs. Georgia case is misrepresented as the Court finding capital punishment unconstitutional. There’s also an anti-death penalty argument that because the fifth Amendment denies the taking of life or property without due process, that’s some kind of clue that the founding fathers did not believe in the practice. Of course, it actually proves the opposite by providing the strict process to take one’s life. I’ve studied the founding fathers quite a bit, and to a man they were solidly behind capital punishment.

This is all a pretty low-budget series, and I can’t find information on where/if it ever aired on television. Picture quality suggests it might not be broadcast quality in today’s standards. The six episodes are found on two discs with no extras. There’s certainly things to learn here, but not much. It’s not going to change your mind no matter where you happen to stand.  If you’re looking for something very thought-provoking, you won’t find it here. “That’s just the way it goes.”

Gino Sassani is a member of the Southeastern Film Critic's Association (SEFCA). He is a film and television critic based in Tampa, Florida. He's also the Senior Editor here at Upcomingdiscs. Gino started reviewing films in the early 1990's as a segment of his local television show Focus. He's an award-winning recording artist for Omega Records. Gino is currently working on his 8th album Merchants & Mercenaries. Gino took over Upcomingdiscs Dec 1, 2008. He works out of a home theater he calls The Reel World. Favorite films: The Godfather, The Godfather Part II, The Body Snatcher (Val Lewton film with Karloff and Lugosi, not the pod people film), Unforgiven, Gladiator, The Lion King, Jaws, Son Of Frankenstein, The Good, The Bad And The Ugly, and Monsters, Inc.
Criminal Activities (Blu-ray) The Lion Guard: Return of the Roar