The Lion Guard: Return of the Roar 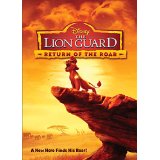 “Let’s go get those stinkin’ hyenas.”

For many years The Lion King was the highest grossing animated film of all time. It remains one of the most beloved films in history. It marked the last of the Disney classic animation triumphs. Combined with the Elton John and Tim Rice songs, it is one of those generational films. While there has never been a feature film follow-up at the box office, there have been a few attempts to keep the franchise alive, and why not? A direct- to-video film told the same story from the unique point of view of the popular characters Timon and Pumbaa. A full-fledged sequel appeared in another direct-to-video feature called The Lion King: Simba’s Pride. Now the baton is being passed to the next generation with a television series on the Disney Channel called The Lion Guard. The new story focus begins with the direct-to-video DVD release of The Lion Guard: The Return Of The Roar.

The story introduces us to the two children of Simba (Lowe) and Nala (Union). The eldest and future Queen of the Pride Lands is Kiara (Riegel). She’s the responsible one of the two. Then there’s Kion (Charles), who embraces his playful life of no responsibility. That is, until his friend Bunga (Ruish), a honey badger, ends up in the clutches of the hyenas, who are hoping for an easy lunch. It’s while trying to save his friend that Kion unexpectedly releases a huge roar along with a lion brand on his fur. We’re talking earth-shaking, with cloud lions playing back vocals. Simba realizes it’s the roar of the lion guard. The story is told of how the last lion to have the roar was Scar, who destroyed his own lion guard when he turned evil. Since then there hasn’t been a lion guard to patrol the Pride Lands and protect the Circle of Life. Unfortunately, there’s no cue-the-Elton-song here. This is a television production, and there’s no budget for royalties to a mega pop star.

Kion is charged with recruiting the next generation of the Lion Guard, but there’s a bit of a misunderstanding. Simba expected him to recruit actual lions, but Kion sees the essential characteristics in his friends: bravery would be Bunga, strength is a hippo, swiftness is a jaguar, and keenness of sight is a bird. Think Kung Fu Panda’s Furious Five. The choice disappoints Simba, who begins to doubt Kion. Of course, those pesky hyenas invade the Pride Lands, and Kion’s Lion Guard saves the day.

There may not be any Elton John tunes here, but at least there is some homage extended, as a few of the titles get mentioned. There’s an answer to the carefree Hakuna Matata. It’s caled Zuka Zama. There are also a couple of nice voice actor returns from the original film. James Earl Jones reprises Mufasa, and Ernie Sabella returns as Pumba. A few of the other voices are close. Rob Lowe takes over as Simba for this and the series.

There’s no way this release can compare with the original, but it is nice to see the traditions continue. The stage musical is one of the hottest of all time, and the story still resonates for generations. Make no mistake. This is a pale imitation of the 1994 hit film. But it’s so nice to know we can still enjoy some time in this world, “until the Pride Lands end”.

Gino Sassani is a member of the Southeastern Film Critic's Association (SEFCA). He is a film and television critic based in Tampa, Florida. He's also the Senior Editor here at Upcomingdiscs. Gino started reviewing films in the early 1990's as a segment of his local television show Focus. He's an award-winning recording artist for Omega Records. Gino is currently working on his 8th album Merchants & Mercenaries. Gino took over Upcomingdiscs Dec 1, 2008. He works out of a home theater he calls The Reel World. Favorite films: The Godfather, The Godfather Part II, The Body Snatcher (Val Lewton film with Karloff and Lugosi, not the pod people film), Unforgiven, Gladiator, The Lion King, Jaws, Son Of Frankenstein, The Good, The Bad And The Ugly, and Monsters, Inc.
Death Row – A History of Capital Punishment in America Tuesday Round Up: February 23, 2016