Posted in: The Reel World by Brent Lorentson on February 26th, 2016 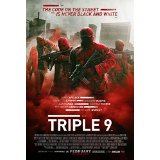 Ever since Michael Mann came along, the bar has been set when it comes to making gritty heist films.  Sure, films have come close in reaching the ranks of Thief and Heat, but close isn’t enough to put films over the top.  When the trailers came along for Triple 9, it was a film that I immediately had my eye on and was curious what director John Hilcoat (The Road and Lawless) would do with the material.  The result is just about the most corrupt cop film to come out in ages and a gritty crime drama full of double-crosses that’ll have you questioning who are the good guys in a sea of so many bad ones.  Is this a modern masterpiece or simply a slick action film?  Well, to be fair, it’s somewhere in the middle.  Strap on your bulletproof vest and grab and extra clip, because Triple 9 throws you in the thick of the action.

In the heart of Atlanta, Georgia, the film opens up with a fun little bank heist that doesn’t go as planned once one of the robbers gets greedy and makes a grab for cash.  For those who have seen the trailer, it’s this cash grab that is responsible for the dye pack explosion that forces the robbers to create a new escape route of their own.  Right off the bat the film was feeling a bit familiar, as I couldn’t help but think about Heat.  But thankfully the film takes an unsuspecting turn once it is revealed that members of this heist crew are cops.

The team is led by Michael (Chiwetel Ejiofor) who has a boss of his own, Irina Vlaslov (Kate Winslet), who is just about unrecognizable with her Russian accent and her vicious portrayal of a Russian/Jewish crime boss.  The dynamic between the two is well played as Michael’s son is used as leverage to get him to do one more deal for Irina. Gal Gadot (Wonder Woman) is the baby mama who lets her sister toy with Michael, and it’s this dynamic that makes it easy to want to side with Michael and his crew.

Not so fast on picking sides, because what makes this film different from so many other heist films is that we get to see that everyone involved does in fact have their own agenda.

Jeffrey Allen (Woody Harrelson) is tasked with catching the crew responsible, and while this happens, his nephew, Chris Allen (Casey Affleck) is assigned a new department.  Showing Chris the ropes is Marcus Belmont (Anthony Mackie), who just so happens to be on the crew that robbed the bank.  Considering the area that Marcus and Chris are working, they don’t get to be your friendly neighborhood officers; instead they are in a war zone among gangs that would enjoy nothing more than to see another dead cop.

As the film plays out there are bits that started to worry me that this was going to simply go the Training Day route, but once Chris and Marcus arrive on scene to arrest a drug cartel member, the film takes yet another clever tone shift.  This arrest that goes horribly wrong  is one of those sequences that just sticks with you; it’s a moment that should remind the audience just how insane situations can get that officers don’t get to turn their backs on but instead have to go head first and guns ablaze.  Every bedroom is set up to be another possible trap, where behind any corner or inside any closet there can be a bad guy with a gun ready to take your head off.  The intensity of this scene is captured and just seizes the viewer till it comes to an end.

How all these characters intertwine is for you to see as the final job comes together.  There are so many great performances here as well as numerous other actors who fill out this immensely talented cast.  Norman Reedus, Aaron Paul, Clifton Collins Jr., and Michael Kenneth Williams all put in some great performances both large and small.  This brings me to the script; while it may not be filled with quotable dialog, there are plenty of well-crafted moments throughout this film.  There are so many cop dramas and heist films, it’s an enormous task to bring something fresh to the table, and despite this being an all-too-familiar story, writer Matt Cook manages to keep this film fresh and without a dull moment.

The heist genre is one of my favorite sub-genres in film, and it takes a lot to impress me.  Triple 9 doesn’t just impress, it exceeds expectations and is a hell of a good time.  This isn’t a film looking to be a critical darling, or win awards.  This is a movie that wants to give you tough guys with guns doing a lot of illegal things, the kind you only get to do playing Grand Theft Auto if you want to avoid doing a prison term.  It’s gritty; it’s intense and keeps its feet firmly planted in reality as compared to other films that involve cars parachuting out of planes.  Triple 9 is the action film to get you excited for the summer release season and is one I’m ready to check out again.

Brent Lorentson is a horror writer and film critic based out of Tampa, Florida. With a BA in Digital Film, he co-wrote and co-directed Scavenger Hunt. His short stories have appeared in various horror anthologies. In 2019 his short script Fertile Blood will be a part of the anthology horror film Slumber Party. He is currently working on his first novel A Dark and Secret Place set to be released in late 2019. Favorite Films: Taxi Driver, Fight Club, I Saw the Devil, The Wild Bunch, Dawn of the Dead, A Clockwork Orange, Pulp Fiction, Heathers, The Monster Squad, and High Fidelity.
Contest: Win Tales from the Prison Yard From Mill Creek Gods of Egypt