Posted in: The Reel World by Gino Sassani on February 28th, 2016 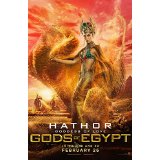 ”We recognize that it is our responsibility to help ensure that casting decisions reflect the diversity and culture of the time periods portrayed. In this instance we failed to live up to our own standards of sensitivity and diversity, for which we sincerely apologize. Lionsgate is deeply committed to making films that reflect the diversity of our audiences. We have, can, and will continue to do better…”

It’s a bad sign when a studio issues a public apology months before the film ever hits the screens. Gods Of Egypt will likely be remembered, if it’s remembered at all, as having some of the worst timing of any film ever. Everyone in the industry has seen the report of the lack of diversity in Hollywood. It started with the Oscars and steamrolled to an audit from there. I don’t know that I buy all of this completely, and I do fear an exaggerated response in future films. Whatever you think of the controversy, Gods Of Egypt stepped right into the big pile of dog doo (Baby says it isn’t hers). The epic fantasy story takes place in ancient Egypt and is cast with a rather obvious number of white Australian actors who just can’t sell the whole Egyptian thing. Count Gerard Butler at the top of the list. Here’s an actor who usually can’t decide exactly what nationality his character is at the best of times. Now you’re just setting yourself up for a disaster. In fact, there hasn’t been this huge a disaster movie since Irwin Allen hung up his lenses decades ago.

You might be able to charge political correctness or political agenda if that was the only thing wrong with this film. Ridley Scott got away with almost the same thing with his Moses retelling, and I don’t recall there being any public statements of apology. The fact is that Gods Of Egypt is just bad in every way possible.

This is really an inferior take on Ray Harryhausen’s Clash Of The Titans or even its remake. Mythology tells us time and again about the feuds and rivalries between the gods and how it was usually the human population that was caught up in the middle of these petty concerns. In case you hadn’t heard it before, the film opens with a lengthy and mostly unnecessary prologue to remind you. So it is with Gods Of Egypt. The sun god Ra (Rush) had two sons. (There’s an Abbott and Costello routine in here somewhere.) The good son was Osiris (Brown), and the evil one was Set (Butler). On the day of the coronation of Osiris’s son Horus (Coster-Waldau) as the new king of Egypt, Set shows up and disrupts the festivities. He kills Osiris and takes away the eyes and power of Horus. The result is Set’s dark reign over the kingdom, and the blind and powerless Horus is banished to a lonely tomb.

Enter human Bek (Thwaites) and his lover Zaya (Eaton). Bek steals one of the eyes and returns it to Horus. When Zaya is killed, he agrees to help Horus regain the other eye in return for bringing back Zaya. We follow Zaya’s journey through the Underworld, which is actually the only compelling part of the film. What follows fails to entertain on any level.

The first problem could have been corrected if director Alex Proyas had just made one phone call to a certain Peter Jackson in New Zealand. Whatever the cost of the long distance dial-up, it would have been worth it. You see, these gods are giants. The problem is that Proyas does not understand how to retain the kind of forced perspective we witnessed in Jackson’s Tolkien films. The scale between these character changes dramatically depending on the scene. It might have been better to just drop that plot line completely, because it never really figures into the narrative and only serves to be one of many elements to take us out of the fantasy.

I am constantly surprised that there are people out there who enjoy watching someone else play video games. Video games just aren’t spectator sports to someone like me. But that’s exactly the feeling you get throughout the film. I kept looking around for my Playstation controller, but it was nowhere to be found. The characters go from one “level” to another, jumping through collapsing bridges and crumbling rocks, and there’s plenty of laser tag thrown in for good measure. I’ve actually seen better graphics in a PS3 Ratchet & Clank game. At least with that I can move my guys around and shoot stuff. They spent $140 million on this film and ended up with a broken video game. I say broken because they wouldn’t let ME shoot stuff. The gods would change into Transformer-like other selves, usually for battle or some dramatic-looking activity that didn’t really impress me very much. There are times that the name Jar-Jar even came to mind. It’s a lot of flash-in-the-pan eye candy that doesn’t hold up if things aren’t moving very quickly. It’s a movie made for raccoons. I had one for nine years. They love shiny things, and that’s about all Gods Of Egypt is good for. But even my pet raccoon would lose interest after about 10 minutes with a new shiny toy. This one goes on for over two hours. She would have asked for her money back, and you didn’t want to tell her no.

Gods Of Egypt is a pretty impressive film except for the pacing, dialog, f/x, acting, stunts, script, direction and cinematography. Spend the money on some fast food. You might die quicker, but it beats seeing a movie that makes you wish that you would. Look, no one sets out to make a film you have to apologize for months before anyone even sees it. I’m sure that everyone set out to make a dynamic film that might even give rise to a profitable franchise. “Well… that didn’t go according to plan.”

Gino Sassani is a member of the Southeastern Film Critic's Association (SEFCA). He is a film and television critic based in Tampa, Florida. He's also the Senior Editor here at Upcomingdiscs. Gino started reviewing films in the early 1990's as a segment of his local television show Focus. He's an award-winning recording artist for Omega Records. Gino is currently working on his 8th album Merchants & Mercenaries. Gino took over Upcomingdiscs Dec 1, 2008. He works out of a home theater he calls The Reel World. Favorite films: The Godfather, The Godfather Part II, The Body Snatcher (Val Lewton film with Karloff and Lugosi, not the pod people film), Unforgiven, Gladiator, The Lion King, Jaws, Son Of Frankenstein, The Good, The Bad And The Ugly, and Monsters, Inc.
Triple 9 The Midnight Man