Fight To The Finish 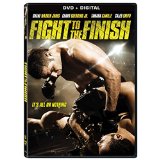 “I fought for the sport of it, never to kick someone’s ass. It started in the ring and ended in the ring. Fighting should be a last resort, not a first.”

Before this quote, I must I was mildly concerned about the message this film was sending to the public. I wholeheartedly agree with the statement; however, before the words were uttered, I was mildly confused by the behavior of some of the characters in Fight to the Finish. Fortunately, the confusion did not last long, as I was quickly brought up to speed about the characters’ actions.

Fight to the Finish tells the tale of Sean McGill, a gifted young fighter about to leave the nest. Adopted by legendary mixed marital arts champion “Big” Jim McGill, Sean grew up idolizing his father and wanting to follow his path in life. His dream is not shared by his parents after witnessing firsthand the medical and financial burden that a professional fighting career has put on Big Jim. Despite this, fighting is where Sean’s true passion lies, and he maintains the discipline of not simply looking to inflict pain on his opponent.

After establishing his own place, Sean becomes drawn into a conflict between his neighbor and her abusive boyfriend, a MMA fighter known for his ruthlessness. Although he attempts to prevent it from escalating to that point, Sean is forced to fight the man in order to protect the woman. This action ignites a feud between the two fighters. Meanwhile, Sean continues to train, despite having no aspirations towards a professional career. Unintentionally, he catches the attention of a former champion fighter and rival of his father who goes about trying to manipulate him into fighting for him, causing friction between him and his family.

The film got off to a slow start but gained its stride by the time the credits rolled. Not quite blockbuster material, but still entertaining to watch if your interest is mixed martial arts. I will advise everyone not to judge the choreography based off the first fight; it threw me off too, but I assure you they get better. An underdog story at its core, there is something for everyone to relate to: action, life lessons, mild romance; albeit the romance is clearly secondary to the life lessons and action.

As I mentioned above, I was slightly thrown off by the parents’ stance on the main character’s career in the beginning. I understood the mother’s stance a bit more, because as Sean’s love interest put it, “I wouldn’t want to watch my baby get hit.” The revelation of the father’s condition illuminated matters, however; perhaps if the information had been introduced earlier on, we could have avoided the confusion. No matter; one can’t argue with the logic behind it, I suppose. I know it is not a completely original concept, but it fits well with the overall story, especially given the situation lead character finds himself in. No good deed and all that; the conflict between the two fighters does at time feel generic and predictable, but is still an important part in moving the story along and reaching a satisfactory conclusion.

In conclusion, if MMA is a field of interest for you, you may enjoy this last addition to the franchise. As I said, it may not be blockbuster quality, but it brings enough to the table to warrant a viewing.

Jeremy Butler is a film school graduate of the International Academy of Design and Technology. He is been writing for Upcomingdiscs since 2012; however, movies have played a big part of his life for much longer. Favorite genres include horror, science fiction/fantasy, and comedy. Favorite movies are V for Vendetta, Boondocks Saints, Kiss Kiss Bang Bang, and The Godfather.
The Taviani Brothers Collection (Blu-ray) Tuesday Round Up: March 1, 2016