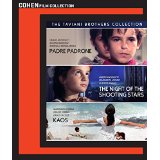 Even though I like to think I’ve seen more movies than the average bear, I’ll admit to having somewhat of a blind spot when it comes to world cinema. So I’m a little ashamed to say I hadn’t even heard of Paolo and Vittorio Taviani — the Italian filmmaking brothers who have worked together all their lives and started making movies in the 1950s — before I picked up this handy three-pack from the Cohen Media Group. The Taviani Brothers Collection features three of the siblings’ most acclaimed work: Padre Padrone, The Night of the Shooting Stars, and Kaos.

“Obedience is the air you breathe.”

The plot outline for Padre Padrone sounds simple enough on paper: a 6-year-old boy named Gavino (Fabrizio Forte) is pulled out of school by his domineering Father (Omero Antonutti) and told he must help tend to the family’s sheep in the Sardinian countryside. Over the ensuing decade and a half, Gavino is put through severe physical and psychological tests. Once Gavino (now played by Saverio Marconi) is old enough to be called for military service, he leaves the countryside with the intention of becoming a radio technician. Instead, the illiterate shepherd falls in love with language and decides to become a linguist, which causes conflict once Gavino confronts his Father.

Believe me when I say that the previous paragraph hardly touches the surface of what makes Padre Padrone — which won the Palm d’Or award at the 1977 Cannes Film Festival — such a disorienting and powerful experience. The film is ostensibly a biography of real-life linguist/author Gavino Ledda, who appears at the start of the film (he was 35 at the time) and returns at the end to offer a coda. But breaking the narrative fourth wall is just one way this movie differs from your standard “cradle-to-grave” biopic. The Taviani Brothers depict breathtaking cruelty — at one point, Gavino’s Father beats him with a dead snake — in the most casual way. (The camera passively hangs back as the Father chases his son to deliver a fresh beating.) There are also surrealistic touches — a sheep seems to mock Gavino while he tries to milk it — as the boy comes of age and discovers his sexuality, which ripples across the entire countryside during one sequence.

That’s a key sequence in Padre Padrone — which translates to “Father Master” — because the film makes the case that the Father’s behavior is symptomatic of that particular region. (Gavino is far from the only traumatized boy in that countryside.) If you squint, you can also make the case that the Father is teaching Gavino lessons about being self-sufficient and hyper aware of his environment. However, the behavior of the Father (played with blistering ferocity by Antonutti) is so outrageously abhorrent here that it eventually makes him a little less compelling and a little too one-dimensional. Still, the climactic confrontation between Father and son is a tense, uncomfortable sight to behold.

“We Tuscans say each shooting star grants a wish. You know what my wish is tonight?”

The Night of the Shooting Stars follows a group of Tuscan villagers toward the tail end of World War II. The Germans are making their retreat and are bombing their way back to the border, so some of the townspeople have been ordered to congregate in the local church. About half of them are content to seek sanctuary in the church, but the other half — led by wise peasant Galvano (Omero Antonutti, again) — proposes seeking out the Americans, who are rumored to be liberating towns nearby.

You don’t need to speak Italian to know about shooting stars and their wish-granting properties. But this genre-bending offering, which mixes fantasy with the cruel realities of war, puts an appropriately bittersweet twist on that romantic notion. The story is technically told through the eyes of Cecilia (Micol Guidelli), a 6-year-old girl with an active imagination. It’s her perspective that lends the story a fairy tale quality, which is a tone Guillermo Del Toro ran with for Pan’s Labyrinth a few decades later. However, The Night of the Shooting Stars excels at showing the ways fantasy and reality can get thoroughly mixed up during war. Some of the townspeople, for example, express random thoughts about their home as a way of applying normalcy to a horrific circumstance.

And let’s just say the six-year-old girl is far from the only dreamer in the bunch. In addition to Cecilia and Galvano — who has his own unrequited love in Concetta (Margarita Lozano) — the robust ensemble includes newlyweds Corrado and Belindia (Claudio Bigagli and Miriam Guidelli), and a few others who routinely seek escape from their harsh circumstance. The search for the American cavalry also takes on a Waiting for Godot-like quality. And just when you think this was the kind of war movie that would eschew battle in favor of focusing on the homefront, the final act features a violent, chaotic skirmish that pits the townspeople and their allies against some of their fellow countrymen. Despite the movie’s nocturnal title, it’s oddly fitting that the nightmarish sequence takes place during the light of day.

“I am a native son of Chaos, and not just allegorically…”

Talk about bang for your buck: Kaos is a collection of four 19th century vignettes based on short stories by writer Luigi Pirandello. The Other Son is about a lonely mother (Margarita Lozano again) desperate to hear from the two sons who left for America, even as she ignores a third son who longs for a relationship with her. Moon Sickness follows newlyweds Bata (Claudio Bigagli again) and Sidora (Enrica Maria Modugno) three weeks after their wedding, when Bata reveals a disturbing secret about himself to his new bride. The Jar is a comical tale about a feudal landlord (Ciccio Ingrassia) who orders an enormous jar for his olive oil; after the jar is mysteriously broken, a new crisis arises after a quirky hunchback arrives to fix it. Requiem is about a group of townspeople from a remote hamlet who want to build a local cemetery rather than having to make a day’s hike to bury their dead. There’s also an Epilogue in which Pirandello (Omero Antonutti for a third time!) returns to his Sicilian home and comes to terms with the death of his mother.

Despite being broken up into different segments — there’s also a brief prologue with a group of characters who turn up in Requiem — this 187-minute film is the toughest to get through. Kaos (the title refers to the Greek translation of the woods near Pirandello’s birthplace) starts out strong with a heartbreaking, addled lead performance from Lozano. (You’ll definitely understand her character’s reasons for ignoring her third son, which are explained through flashback.) That’s followed by some impressive horror movie beats in the werewolf-esque Moon Sickness, which also mixes in some convincing romantic moments. And The Jar is able to bring refreshing comedy that doesn’t feel at all out of place in the magical 19th century landscape established by the Taviani Brothers.

But Requiem feels like a stretched-out slog, even though the segment clocks in at around 40 minutes. And while the Epilogue dovetail nicely with Requiem, it feels pretty separate from the stronger stories in the film, which are *very* loosely connected by a raven that flies overhead at the start of each segment. It’s a downer way to end an impressive film — and an impressive collection— that shows off the filmmaking siblings’ skill and versatility.

Padre Padrone and The Night of the Shooting Stars are presented in an aspect ratio of 1.66:1, while Kaos is presented in an aspect ratio of 1.85:1. The 1080p image is arrived at with an AVC MPEG-4 codec at an average of 32 mbps. There’s a disclaimer at the start of Padre Padrone that states the film was restored using the original 16mm negative, and the restoration was approved by the Taviani brothers. That’s the disc’s way of preparing us for the hazy, washed-out image that follows. Black levels are also nowhere near as inky as modern HD enthusiasts have become accustomed to. That being said, the image is faithful to movie’s original presentation and is largely free of blemishes. (You can even talk yourself into saying the dullness of the palette matches Gavino’s predicament.)

Unfortunately for Padre Padrone (but fortunately for us), the first movie suffers even more when it’s compared to the other two films in the collection. Both The Night of the Shooting Stars and Kaos feature extensive sequences in the sunny Italian countryside, which lend themselves to a warm, clean palette. But despite being released within 10 years of Padre Padrone, the difference in how the two newer films look is like night and day. The amount of fine detail and inky black levels have more in common with modern HD releases than they do with Padrone. (I’d give Shooting Stars the slight edge over Kaos in terms of visual wow factor.)

Each of the three films in The Taviani Brothers Collection features an LPCM mono track and is presented in Italian with English subtitles. The mono tracks obviously have their limitations, but I was impressed by the clarity throughout. (Padre Padrone sounds a bit more hollow at times than the others, but still offers a reasonably crisp sonic presentation.) Each film is largely set outdoors, and a decent amount of atmospheric noises come through the track. This may not offer the all-encompassing immersion a newer presentation would possess, but I was generally impressed by this clean, simple effort.

All of the bonus material is presented in HD. Part 1 of the Taviani Brothers interview is on the Padre Padrone disc, while Part 2 can be found on The Night of the Shooting Stars disc.

Interview with the Taviani Brothers: (1:50:02) This chat is presented in two parts and was conducted by Columbia University’s Richard Pena and Alessia Palanti. Part 1 (48:31) covers the filmmaking siblings’ early life and the making of Padre Padrone, including meeting Gavino Ledda’s monstrous dad. (Apparently he’s even meaner in real life.) The discussion in Part 2 (1:01:31) focuses on The Night of the Shooting Stars (the brothers incorporated their own experiences from growing up in Tuscany), Kaos, and some of their frequent collaborators. (As you can see from the synopses above, the siblings reunited with a few of their actors in Kaos.) This subtitled conversation is an enlightening deep dive into the Taviani Brothers’ lives and careers.

If you’re not familiar with The Taviani Brothers, this eclectic collection from the Cohen Media Group is pretty great way to get started. You’ll get drama, surrealism, sex, horror, fantasy, and more.

And I’m sure fans of the siblings will appreciate having some of their best films presented in shiny HD. (Well, two out of the three are shiny anyway.)

Entertainment (Blu-ray) Fight To The Finish