The Spoils of Babylon

Posted in: No Huddle by Archive Authors on March 7th, 2016 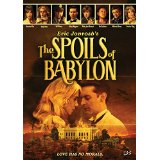 Eric Jonrosh has written many weighty tomes full of lust and passion and desire and wanton abandon. Perhaps the greatest of these heavy and important contributions to literature is The Spoils of Babylon. He directed a 22-hour film himself that he hoped would reveal the real heart and soul and dark insides of the book. No one was ready for such an intense and unbridled examination of the human experience, so Jonrosh allowed the footage to be bastardized and submitted to television as a miniseries. Jonrosh himself introduces the multi-episode presentation, which now clocks in at two hours and 18 minutes. Jonrosh drinks freely of wine at his favorite restaurant as he is filmed and erratically rambles about the origins of his work and his copious experiences creating masterpieces.

I will now tell you that everything I have just told you is utter nonsense, or more accurately, an attempt to decipher the utter nonsense that is The Spoils of Babylon. It is calculated nonsense with a purpose. It is meant to explore the kind of programs that populated television in the 60’s and 70’s. It is a joint production of Will Ferrell’s Funny or Die website and the Independent Film Channel. Ferrell plays the corpulent and constantly intoxicated Jonrosh.

The Spoils of Babylon follows a young Devon (Tobey Maguire) as he wanders the desert only to be found and adopted by Jonah Morehouse (Tim Robbins) and his daughter, Cynthia Morehouse (Kirsten Wiig). Even though Cynthia and Devon are both still young, she is sexually attracted to her new brother. Jonah may be the poorest man in the United States as he relentlessly pursues his dream of finding a gusher of oil and has time for nothing else as he continuously struggles with his mad obsession. The years pass, and many things happen.

It should be obvious that this is a spoof of bloated and pompous novels and lurid television that filled the American mindset for many years. It is done with a love and affection for how cheesy and silly so much of the popular culture of our past has been. Aside from Maguire, Robbins, and Wiig, the cast is full of able actors like Val Kilmer, David Spade, Toby Huss, Haley Joel Osment, Jessica Alba, Molly Shannon, Carey Mulligan, and Michael Sheen. They are all having fun embracing the outright silliness required.

The Spoils of Babylon is somewhat unique in that it fully embraces all the worst tendencies of the miniseries while still rigorously and lovingly adhering to all its excesses and foibles. It may be a parody, but it doesn’t stray too far from many camp classics from the past. If you were a fan of many of these bloated and long-winded shows from the past, you will probably appreciate this effort. It all is rooted in the melodramatic and sophomoric bestseller. If you want to check in on some of this source material, look at the works of Harold Robbins, Sidney Sheldon, and Jacqueline Susann for a start.

Responding to a demand that doesn’t exist, a sequel has been commissioned called The Spoils Before Dying. If you have a fine appreciation of melodrama and excess (and I mean this as a compliment), then you will not be able to get enough of this “Spoils” series.

Hogan’s Heroes: The Complete Series Tuesday Round Up: March 8, 2016