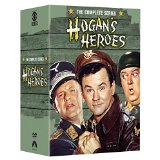 Who would have believed that you could do a situation comedy based on Nazi Germany and a group of POW’s in World War II? It wasn’t an easy sell. When Albert S. Ruddy first came up with the idea, it was a contemporary story about a group of guys in a normal U.S. prison. There were a lot of problems, mostly with the idea of making your main characters criminals. Of course, that’s not so much the problem today. But this was the 1960’s, and those kinds of “heroes” were not quite as accepted. Eventually the concept developed to put the characters in a prisoner of war camp in Nazi Germany during the World War II. Remember that we were only 20 years removed from the end of the war and the discovery of the concentration camps and all of the horrid images these things evoked in people. Any smart betting man would have given the chance of getting such a series to air at somewhere between zero and Hell freezing over. And when the show was pitched to CBS, that’s exactly what the execs had to say.

Somehow they were convinced enough to do a pilot episode. It was too funny to pass up, even with the more sober circumstances. By the end of that first season Hogan’s Heroes was one of the top rated shows on television. Larry Gelbart often credits the success of Hogan’s Heroes as the precedent that allowed shows like MASH to be sold. Suddenly it was OK to find laughter in such places. The show ran for six seasons from 1965 to 1971. The cast would remain completely intact throughout the show’s run. The show would also have to hold off a plagiarism suit from the writers of Stalag 17.

Stalag 13 was run by the incompetent Col. Klink (Klemperer) and his right-hand man Shultz (Banner) who never saw a dessert he didn’t like. While Shultz was directly responsible for the prisoners, he really didn’t want to know what they were doing. When asked if he saw or heard something his pat answer would always be “I know nut’ing. I see nut’ing”. Unknown to their German captors, the prisoners have been sent there by Allied Command. They have an intricate system of tunnels and secure communication with the Allies. They can get in and out of the camp with ease. Their missions often involve getting some vital piece of information or smuggling a person or equipment out of Germany.

The ranking Allied officer among the prisoners is Hogan (Crane). He’s the brains behind the outfit. A little debonair with the ladies, Hogan often charms his way out of trouble. He lets Klink think that he keeps getting the better of the boys. To keep the bad management in place they assure that Stalag 13 is the only POW camp that has never had a successful escape. The team also includes British officer Newkirk (Dawson), Frenchman LeBeau (Clary), munitions expert Carter (Hovis) and communications expert Kinch (Dixon). Bob Crane’s real-life wife, Patricia, appeared in a recurring role as Hilda, Klink’s secretary who was working for Hogan. They were in the middle of a divorce when he died. Robert Clary was actually kept in a concentration camp during the war, and Klemperer’s family fled Germany in the 1930’s.

The series always maintained a high level of writing owing to the fact that the same five man team remained in place for the entire run of the series. The show boasted some very good acting. Not a single character could be considered a weak link. Often the best laughs occurred when they were actually playing it pretty straight. The show became an international success except in Germany where the portrayal of the Germans as nitwits was severely protested. It was the only country that bought television shows to boycott Hogan’s Heroes. Eventually the series did make it to Germany, but it was rewritten. While the live action film was kept, a new dialog was added that made the show appear more contemporary and removed the bumbling of the Germans somewhat. It has appeared in syndication somewhere for an unbroken 45 years, making it one of the most popular shows in the world.

The collection includes some Bob Crane home movies and audio commentaries on select episodes. I do have some serious gripes about the packaging. You get two of these oversized plastic cases with tons of overlapping discs. They damage very easily, and you’ll want to inspect every disc as soon as you buy it. You get all 168 episodes on 25 DVD’s.

Bob Crane was the subject of a Hollywood murder mystery when he was bludgeoned to death in his hotel room in June of 1978. To this day the killer has never been identified. Robert Clary is the only surviving member of the cast. Klemperer and Banner worked together previously on an Alfred Hitchcock episode. Here they play the best “bad guys you ever saw. In fact, “With enemies that that you don’t need any friends.”

Gino Sassani is a member of the Southeastern Film Critic's Association (SEFCA). He is a film and television critic based in Tampa, Florida. He's also the Senior Editor here at Upcomingdiscs. Gino started reviewing films in the early 1990's as a segment of his local television show Focus. He's an award-winning recording artist for Omega Records. Gino is currently working on his 8th album Merchants & Mercenaries. Gino took over Upcomingdiscs Dec 1, 2008. He works out of a home theater he calls The Reel World. Favorite films: The Godfather, The Godfather Part II, The Body Snatcher (Val Lewton film with Karloff and Lugosi, not the pod people film), Unforgiven, Gladiator, The Lion King, Jaws, Son Of Frankenstein, The Good, The Bad And The Ugly, and Monsters, Inc.
Mountain Men Season 4 The Spoils of Babylon