Out Of The Inferno 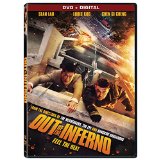 Out of the Inferno is one of the most recent films written and directed by Danny and Oxide Pang. I must admit that I am a fan of the prolific duo, ever since I watched the original Bangkok Dangerous. Whether it be their intense dramatic thrillers such as The Detective or The Eye franchises, or their nightmarish dreamscapes in Sleepwalker or Re-Cycle (my personal favorite from the Pang Brothers). Unfortunately, Out of the Inferno did not come close to surpassing the “bar” of expectations when it comes to my enjoyment of a film from the Pang Brothers. The narrative involves two firefighter brothers who are dedicated to their line of work. One day they are given a choice by their uncle to either stay with their current station, or to come work as consultants for his company that is currently developing new firefighting technology. Naturally, one brother sees the lucrative future in the technology, and the other sees the nobility in the job he is currently working, so they go their separate ways. Years later, we return to the characters: one brother has immeasurable wealth as the head of the new fire technology company, and the other has gained rank within the fire department and is expecting a child with his wife. Due to the extreme heat on this particular day, a fire starts and quickly spreads within the giant building where the wealthier brother just so happens to be hosting a celebratory banquet.

Immediately I am reminded of Backdraft from 1991: two brothers who don’t necessarily get along and lots of fire and backdrafts. In fact, the amount of backdrafts in Out of the Inferno puts the number of backdrafts in Backdraft to shame, or any realistic fire for that matter. For the reader who may not know, a backdraft is a sudden surge of fire that rushes to consume the oxygen that is introduced to the vacuum of a burning room. Fires create vacuums in enclosed spaces, and when firefighters attempt to penetrate these spaces, the force at which the flame rushes outward can be fatal. So here are the ingredients to the mixed drink that is Out of the Inferno: one part sibling rivalry drama, two parts “old versus new” firefighting technologies, and enough backdrafts to singe the hair off of your head three times over. Sounds fun, right? Well, it probably would be if it felt cohesive.

This is certainly not the most entertaining film from the Pang Brothers. Every aspect of the drama introduced came across one of three ways: Either it was forced, incomplete, or just didn’t need to be there to advance the story. Which is very strange, because I really like the stories written by the Pang Brothers. The Detective and Bangkok Dangerous were so compelling that it didn’t matter to me if they had any shootouts or intense action sequences. My enjoyment of the film came directly from the universe they had created and how their characters lived or survived within said universe. There are many times when Out of the Inferno makes a character dangle off of a high place, creating a five-minute scene of “action” that really did nothing for me in terms of entertainment. Oh, and did I mention there are backdrafts? At least four total; I’m not going back to count, because they really lose their appeal after one.

By way of contrast, this film actually does handle the social anxieties of “old versus new technologies” rather well. As I said before, I am in love with the dreamscape that the Pang Brothers created in Re-Cycle, but it was almost ruined by the “message” of the film, which you would typically expect to be implicit. However, the brothers kept that film’s message as well hidden as its title suggests. Out of the Inferno, on the other hand, really demonstrates that the Pang Brothers are capable of recognizing complex social anxieties, but folding them carefully into the story, rather than beating you over the head with them.

Regardless, I look forward to the next film from this duo. While I did not enjoy Out of the Inferno, I am excited to see how they will demonstrate their implicit social critiques in their future work. Artists consistently grow and refine their craft, and I have to believe that if they began their career with a film like Bangkok Dangerous, they will produce impressive films more often than not.  If you are a die-hard fan of the Pang Brothers, I would suggest adding this to your collection; it definitely has their distinct directing style that many do enjoy.

Tuesday Round Up: March 8, 2016 The Americans: The Complete Third Season