The Americans: The Complete Third Season 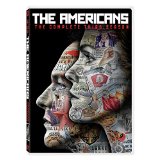 Naturally, Elizabeth and Philip Jennings — the Soviet spies next door at the center of FX’s The Americans — have proven to be exceedingly elusive. Over the course of three seasons and 39 episodes, they’ve dodged numerous close calls from the federal government, enemy agents, and from within their own household. But while various parties have tried to catch the main characters in the act, the thing that makes The Americans one of the very best shows on TV is that it’s actually incredibly easy to “get” Elizabeth and Philip; their efforts to keep their (unconventional) family together are universal.

A quick catchup in case you’ve never seen The Americans: During the early 1980s, Elizabeth (Keri Russell) and Philip Jennings (Matthew Rhys) appear to be a picture-perfect couple. The married travel agents have a curious teenage girl named Paige (Holly Taylor), a precocious tween-ager named Henry (Keidrich Sellati), and they live in a nice house in the Washington, D.C. suburbs. The only thing wrong with this picture is that Elizabeth and Philip are actually KGB agents, a fact that they’ve hustled to keep hidden from their kids and Stan Beeman (Noah Emmerich), the FBI agent who lives in their neighborhood.

Those two words tidily sum up the overriding theme for the show’s exemplary third season, but they actually go back much further than that. The final shot of the first season was the first major indication that Paige realized her parents were leading secret lives. Those lives uncomfortably collided with the Jennings household when Elizabeth and Philip’s superiors expressed a desire to bring Paige into the espionage fold at the end of season 2. So even though season 3 begins with Elizabeth and Philip’s complicated marriage in a (relatively) healthy place, they soon find each other at odds over Paige’s future.

Again, the thing that makes The Americans brilliant is that creator Joe Weisberg has framed the complex lives of a pair of Russian spies as a family drama pretty much anyone can relate to. In other words, Elizabeth takes on the role of the mother who is excited about the prospect of her child joining the family cause business, while Philip is the parent who simply wants his children to have a better (less violent) life than he’s endured. Meanwhile, Paige knows…something is up with her parents and even exhibits some craftiness of her own by manipulating them during a birthday dinner in Ep. 4/“Dimebag.” (Maybe she’d be a great spy after all.)

Of course, Weisberg (a former CIA officer) doesn’t skimp on the thoroughly cooler, pre-cell phone era, old-school spy games just because he uses Elizabeth and Philip’s marriage as the show’s foundation. (Ep. 2/”Baggage” features one of the grislier body disposals I’ve seen in a while. We also get more wigs than ever!) Season 3 examines the stress that the Soviet-Afghan War — referred to as Russia’s version of the Vietnam War — put on Soviet leadership. On top of that, the FBI acquires a Russian defector (guest star Svetlana Efremova) who may or may not still be on the Soviet payroll. Elizabeth and Philip also work to insinuate themselves into the CIA and acquire a list of their operatives, which forces Philip to connect with a teenage girl named Kimmie (impressive guest star Julia Garner) who uncomfortably reminds him of Paige. Elizabeth also trains a graduate student who puts the couple on a collision course with a dangerous South African intelligence officer looking to sabotage the anti-apartheid movement.

As you can see, there’s a lot going on in this meticulous and densely-plotted show, which is why I actually think it plays much better in binge mode versus watching it week-to-week. Weisberg and Co. have taken extraordinary care to give both sides — from the FBI to the rezidentura at the Soviet Embassy — equal weight and validity in their missions. So just when you think we’ve seen the last of Nina (Annet Mahendru), the alluring KGB agent who was convicted of treason at the end of season 2 after it was discovered she was working with Beeman and the FBI, we periodically check in with her in a Moscow prison cell. Back in D.C., Stan and equally-smitten rezidentura colleague Oleg (Costa Ronin) work to find a way to get Nina released, but we’re quickly reminded that Nina is very capable of making things happen on her own.

The performances are top-notch across the board, starting with Russell and Rhys. (Who have partnered in real-life since the show began.) Russell is wonderful at conveying Elizabeth’s professional iciness and her intensely personal fire. Those qualities are tested in Ep. 9/”Do Mail Robots Dream of Electric Sheep?” when Elizabeth faces off with an unlucky older woman; it’s a great showcase for Russell. Meanwhile, Rhys might be giving the most underappreciated great performance(s) in television. In addition to playing an increasingly weary Philip, we’ve now gotten three seasons’ worth of his performance as “Clark”, the assumed identity Philip took on to manipulate Martha (Alison Wright), a secretary at the FBI’s counterintelligence division. With so many proverbial balls in the air, we were bound to get some cracks in Elizabeth and Philip’s cover. (The major revelations here occur in Ep. 10/”Stingers” and Ep. 12/”I Am Abassin Zadran.”)

It’s also fortunate that Taylor, growing into an impressive young actress, has proven to be up to the task of handling the dramatic weight that has been placed on Paige.  Season 3 also sees the debut of Oscar nominee Frank Langella as Gabriel, Elizabeth and Philip’s paternal former handler who returns during this particular bumpy time in their lives. He’s so smooth that you barely notice when he’s being sinister. (For what it’s worth, Margo Martindale turns up as the Jennings’ former handler Claudia for a single scene that inexplicably won her a Guest Actress Emmy; Martindale has been great on this show in the past, but that’s just silly.) Emmerich also continues to discover different layers with Stan; season 3 examines his loneliness after the collapse of his marriage to Sandra (Susan Misner, looking livelier than ever), which prevents him from simply being the clueless bozo who doesn’t know there’s a pair of Russian spies across the street. (Although he’d be joining similarly clueless bozos on shows like Breaking Bad and Dexter.)

The Americans: The Complete Third Season features all 13 episodes on four discs. Discs 2-4 contains deleted scenes, and Disc 4 includes the featurette “The Cold War for Paige”, which focuses on the season’s central conflict. Honestly, the only disappointing thing about this release is that Fox has seemingly deemed this outstanding show to be unworthy of a Blu-ray release. (This was also the case with the season 2 set.) Season 3 ended thrillingly with President Reagan’s famous “evil empire” speech juxtaposed with Elizabeth and Philip’s secret finding its way into unwelcome ears. Season 4 premieres March 16, and I can barely wait to see what happens next.