The Decline of Western Civilization Parts 1 & 2

Posted in: No Huddle by Brent Lorentson on March 9th, 2016 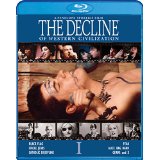 Maybe it’s simply just a part of growing up, but when I listen to the radio and I hear what is topping the charts I just roll my eyes and wonder, “What is this crap I’m listening to?”  We’ve all experienced this at some point, I’d imagine, and as I’ve gotten older my music tastes have seemed to move to before my time, as I’ve moved past my days of listening to strictly metal and rock that ruled the 90’s to now embracing the music of the 60’s and 70’s.  I listen to the pop music that floods the airwaves now and hear “music” that lacks substance and meaning, as it is just noise to play on the dance floors of clubs.  It’s here where I feel the series of documentaries Penelope Spheeris should conclude her saga of music over the decades.

In 1981 Penelope Spheeris came out with a documentary that captured the LA punk scene, a scene that was filled with such rebellious nature that for some it was the last stand against the corporations taking over our music.  These young men and women are pretty much the unsung heroes of music; whether you’re a fan or not of punk, it has made its mark on music to this day, and it did so without flashy music videos and without the Twitter-verse; it did so as a unified force that wasn’t afraid to stand up to its oppressors.

Playing in whatever clubs would take them, we see a series of punk bands playing to their crowds and the raw energy that comes from the performances and how their crowds react with “pogo dancing” to near-chaotic rioting.  We get to see a pre-Henry Rollins, Black Flag performance followed by an interview at their home.  Their home is graffiti-decorated basement of an old church.  It’s a sight that resembles something closer to a den of homeless people squatting in whatever place they can find, but the band is more than fine with their surroundings.  After all, they’ve got their beer and each other, while still having spots to get laid, so for them, what do they have to complain about? Spheeris and her crew are unafraid to ask questions or go to areas that most individuals would avoid at all costs, and it’s this fearless approach that seems to break down the walls with the bands and give her such an unfiltered access.

One of the film’s more memorable moments is when we see the lead singer of The Germs slur and scream his way through the band’s set.  It’s a performance that is not only awful, but at the same time as the camera moves to the audience, we see the primal effect it has over them.  When we later see the singer in interviews, he seems normal enough, and attempts to say that his stage performance is simply all an act.  Follow this with the performance by Fear, which has the band physically and verbally abusing the audience; it’s amusing at first but quickly leans to being disturbing, as we have to wonder whether the band is truly trying to incite a riot.

With interviews of fans thrown in giving their reasons for listening to punk, it borders from cliché to at times even being sad. I’m still trying to get together my thoughts on how I feel about these performers.  Part one of The Decline of Western Civilization has the energy and impact you would get from attending a punk show, and it leaves you wondering where these guys will end up down the road.

With part two of The Decline of Western Civilization, we move on to the metal and glam rock scene, and it is a complete departure from the previous installment.  The gritty 16mm and B&W footage from the first entry is traded in for a very polished and slick look at the rock bands that ruled the 80’s.  It’s not just the look that separates this film, but the points of view from the artists as well.  We move from the kitchens of these poor kids just throwing together a sandwich, to the kitchen of millionaire Ozzy Osbourne as he is cooking himself some breakfast.  We’ve gone from kids just making ends meet to barely to survive, to rock legends who survive and thrive on living in excess.

No longer are we listening to bands damning the establishment, but instead we are hearing about bands and how they thrive on sex, drugs, and rock & roll.  These singers are so self-indulgent that this at times borders on being laughable as Paul Stanley from Kiss does his interview from a bed he’s sharing with other women.  As the film progresses, we see Spheeris is able to capture the sadness that comes with fame as she interviews the lead singer from WASP as he consumes massive amounts of alcohol as his mom looks on from poolside.  Spheeris continues to push with the tough questions as we finally see cracks with members of just about all the bands, and we finally get a glimpse of what it is that drives them to success and to the bottle.

What is prevalent in part two is the blatant sexism that is on display and how the musicians exploit their groupies.  It’s something that has always been a part of the rock & roll lifestyle, but Spheeris attempts to look into why it is these women are so open to being exploited, and it’s in sequences where the girls perform on stage where we get some insight that is better left to be seen and heard for yourself.

It was with these films Spheeris was able to forge her career, making Suburbia not long after part one’s release.  For those wondering how much of an impact Spheeris has made on Hollywood, well, the famous opening credit walk sequence in Reservoir Dogs was lifter from a sequence in Suburbia, which was filmed about a decade prior.  Spheeris would find her fame going on to direct Wayne’s World and numerous other studio pictures.

While not everyone will appreciate these documentaries, they are still a fascinating time capsule of music that has come and gone.  Were these the glory days of punk and rock?  Does music have a chance of reclaiming its audience rather than exploiting it for the almighty dollar?  We can only hope that there are artists who will find a way to make music great again, but for now as the title of the series evokes, we have passed the decline and have fallen to the bottom of rock.

Brent Lorentson is a horror writer and film critic based out of Tampa, Florida. With a BA in Digital Film, he co-wrote and co-directed Scavenger Hunt. His short stories have appeared in various horror anthologies. In 2019 his short script Fertile Blood will be a part of the anthology horror film Slumber Party. He is currently working on his first novel A Dark and Secret Place set to be released in late 2019. Favorite Films: Taxi Driver, Fight Club, I Saw the Devil, The Wild Bunch, Dawn of the Dead, A Clockwork Orange, Pulp Fiction, Heathers, The Monster Squad, and High Fidelity.
Life Kill or Be Killed