Posted in: No Huddle by Archive Authors on March 9th, 2016 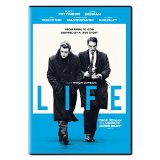 Life was financed by Canada and Australia with a Dutch director, but the subject matter was strictly American. I’m burying the lead because I want to give the film’s subject a proper buildup. Life is about one of the most famous people who ever lived. He was a person who was loved all over the world and whose face is the preeminent icon of youth and rebellion. One could argue there are others who could vie for the crown, but for different reasons I would insist that James Dean is the man. James Dean is unique for many reasons, but the main one is that he died at 24 at the cusp of a very big wave of fame. His talent and charisma was obvious, and he nailed it three out of three times on the big screen, East of Eden, Rebel Without a Cause, and Giant. He was the next Brando but became the only James Dean. There are many screen legends, but no one burned brighter and faster with a light that shines to this very day. He died September 30, 1955 from a car crash.

Life is the story of a photographer who spent a few days with Dean just before he became insanely famous. Denis Stock (Robert Pattinson from the Twilight movies) took some of the first candid and most iconic photographs of Dean before he was swallowed by the studio system. Dean ( Dane Dehaan, who James Franco has tweeted is stalking him since he’s made James Dean, Allan Ginsberg, and Green Goblin movies after Franco did) is an elusive and skittish character in this film. Its obvious Dean knows he’s special but is not really suited to being famous. He has come from small town in Indiana and life on a farm with a very supportive religious family.

Like many true stories about shy and elusive famous people, the job of telling the story is left to fringe people and hangers-on. In this case, it is a struggling and unsure photographer who sees something is just about to happen. He knows that this might make his career. James Dean is a sweet and pleasant person as depicted in this film, but not given to doing what anyone tells him to do. The two men form a tentative friendship in the few days they spend together, which included a trip to Dean’s hometown. It’s hard to know who the real Dean was aside from what we see in those three movies he made. It seems he was a shy and sweet person who was enormously talented in his ability to express raw and real feeling.

The real point is that Dean was preserved in such a succinct and potent form, which everyone will agree is like no other. He didn’t have a long, rambling career like Marlon Brando. Dean was perfection on the big screen, and then he was gone. Dehaan turned down the role five times before he eventually relented. I understand why, because no matter how good he might be, it’s impossible to duplicate the one and only James Dean.