Posted in: The Reel World by Brent Lorentson on March 11th, 2016 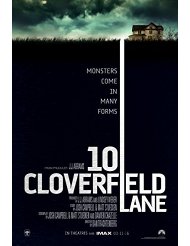 Bad Robot in my eyes is simply the best at keeping things a secret.  In this day and age to be able to surprise audiences is just about an impossible task.  When the first Cloverfield trailer was released in 2007 in front of Transformers, it was a trailer that had us all guessing up until its release.  In my opinion Cloverfield was one of the best found-footage films to come out, and was a grand achievement considering it was a monster film that had been pretty much been kept under wraps until its actual release.  Bad Robot managed to surprise us again, releasing a trailer for 10 Cloverfield Lane that set the internet on fire with theories and hopes for this to be a long-awaited sequel.  But is that what this really is?

We are first introduced to Michelle (Mary Elizabeth Winstead) as she is in the process of leaving her fiancé; we don’t get to see the confrontation if there ever was one, but all we see is her packing her things and hitting the road.  In the middle of the night she is in a horrible accident, and when she awakes she is chained and trapped inside the bunker.  The tension is kicked in from this moment on and doesn’t relent.  No flashy effects, but instead the simple plot device of sticking with the lead character and discovering things as Michelle discovers them is the key to this film.

Michelle’s rescuer is Howard (John Goodman), who from the moment he arrives on screen we are left to question for ourselves if he’s simply a good Samaritan or if there is something more sinister at play.  I’ve always enjoyed seeing Goodman on screen, and he delivers the performance of his career here.  The range of emotions we see from Goodman is like something I’ve never seen before, and it helps carry this film effortlessly.  As he explains to Michelle about the outside world basically no longer existing and to prepare to stay down in the bunker for a year if not more, it’s enough to suck the life and hope out of anyone.

The simplicity of the film is what works so well.  It’s a scenario that can be believed by any member of the audience, and how stubborn our minds can be.  When watching the film you can understand how this was a film that managed to sneak under the radar.  While first time director Dan Trachtenberg deserves a nod of praise for his execution of this film, the real hero is Damien Chazelle and the two writers, Josh Campbell and Matthew Stuecken, who created the project.  Having seen Chazelle’s work on Whiplash and Grand Piano, I can’t help but feel it was his influence that gives this film the old school Hitchcockian feel.  This is a brilliantly-crafted script that will put this film on the map for film geeks for years to come.

Brent Lorentson is a horror writer and film critic based out of Tampa, Florida. With a BA in Digital Film, he co-wrote and co-directed Scavenger Hunt. His short stories have appeared in various horror anthologies. In 2019 his short script Fertile Blood will be a part of the anthology horror film Slumber Party. He is currently working on his first novel A Dark and Secret Place set to be released in late 2019. Favorite Films: Taxi Driver, Fight Club, I Saw the Devil, The Wild Bunch, Dawn of the Dead, A Clockwork Orange, Pulp Fiction, Heathers, The Monster Squad, and High Fidelity.
Kill or Be Killed God’s Club