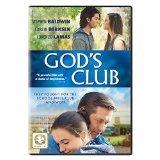 Prayer in school, oh boy, I can’t think of another high-tension issue that surpasses this one. Although God’s Club is not necessarily about this particular subject, its premise is bound to have some big arguments on both sides of the fence. I’m sure most of us know them already, but for the sake of my word count, let’s run them down. On the one hand, this great nation of ours was founded on the ideal of religious freedom; however, the separation of church and state has much to say about the matter as well. Needless to say, this is a topic that garners a lot of attention and must be handled with care. Fortunately, I believe that to be the case with God’s Club.

Before the death of his wife, Michael’s attitude in regards to the bible club was tolerant at best. Believing the extracurricular activity was not worth the pushback that it was receiving from outraged parents, he was supportive, albeit unenthusiastic. Following her passing, he makes it his mission not only to reinvent the club but spearhead it as well. It does not take long before he finds himself up against the same backlash that plagued his late wife. Only through perseverance and dare I say faith will he be about to survive the onslaught.

As I mentioned earlier, this is a major subject with varying opinions on the matter, opinions that I believe are accurately illustrated in the film. God’s Club gets a gold star from me in regards to the way the subject matter was handled, with both sides of the argument being voiced in a tasteful manner. Granted, those arguing against do come off as the general villains of the tale, but the reasoning behind their fight is elaborate enough for the audience to grasp that there is no good or bad side but just differing opinions.

The religious packaging of the film is likely to turn some away; however, I would encourage those to give it a chance, because it is about more than that. It’s about taking a stand for something that you truly believe in. It’s about courage and commitment as well as a tale of rediscovery illuminated through the action of Stephan Baldwin’s character, who goes through a transformation. Baldwin’s performance, albeit monotone in the beginning and in select areas, does shine in the aforementioned attributes. There are also a lot of additional familiar faces so that the audience, no matter if it’s young or old, will recognize someone.

In conclusion, don’t allow your feelings on religion to allow you to miss out on a worthwhile experience in my opinion. Beyond that subject is a worthy tale that has the potential to inspire those that are willing to sit down and enjoy. It has a bit of a Hallmark tone, but don’t let that put you off either.

Jeremy Butler is a film school graduate of the International Academy of Design and Technology. He is been writing for Upcomingdiscs since 2012; however, movies have played a big part of his life for much longer. Favorite genres include horror, science fiction/fantasy, and comedy. Favorite movies are V for Vendetta, Boondocks Saints, Kiss Kiss Bang Bang, and The Godfather.
10 Cloverfield Lane The Big Short (Blu-ray)