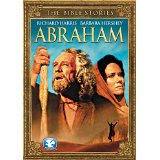 In the book of Genesis from the Bible, the story of Abraham comes right after the stories of Adam and Eve and Noah. It is one of the foundation stories of the Bible and talks of Abraham being the father of the Jewish people. The Bible is the source book of Christianity as well. The stories of the Bible are well known among people of all faiths as well, so it is assumed that most people on the planet know the story of Abraham. Bible stories are done religiously (pun intended), and Richard Harris (Camelot, Albus Dumbledore in the first two Harry Potter movies) himself has done two other Bible stories (Cain in The Bible: In the Beginning and the apostle John in The Apocalypse). Abraham is a well -mounted two-part 173-minute 1993 television presentation that originally aired on TNT as part of a Bible series. There is a box set called The Bible ,which also includes Joseph in Egypt, Samson and Delilah, Jacob, Moses and David.

Before there was Moses, God spoke to Abraham (or Abram) and told him to take his people to search for an unknown land called Canaan. God promised Abraham to “make of him a great nation, bless him, make his name great, bless them that bless him, and curse he who may curse him”. Abraham wanders with his tribe which includes his wife, Sarah (Barbara Hershey), and his nephew, Lot. The cast also includes Vitorrio Gassman as Terah, Abraham’s 205-year-old father, and Maximilian Schell as Pharaoh. One of the main struggles that Abraham faces is fathering a child, because he is very old himself. In fact, many of the things that God has promised him seem impossible, and his faith is tested many times. At one point they arrive in Egypt and Sarah is taken to live in the house of Pharaoh. Eventually they escape, and they take Sarah’s Egyptian handmaiden, Hagar. Eventually Hagar is offered to Abraham by Sarah to consort with and have a child. The story of Sodom and Gomorrah is also included. Two angels are sent by God to rescue Lot from the evil city. Lot at one point offers his young daughters to evil men of the city who want the angels who have come to Lot’s home. The next day, because God could not find 10 righteous men in the city, it will be destroyed. Lot’s wife is turned to salt when she turns to look back against God’s expressed command.

Finally, Sarah gives birth to a son, Isaac. This makes them both happy, but then God tells Abraham to go to the mountain and offer Isaac as a burnt sacrifice. Abraham having been tested many times still complies with God’s request, but at that last moment God provides a ram caught in a thicket by his horns. Abraham gratefully sacrifices the ram in Isaac’s place.

Abraham is done reverently and is directed by TV veteran Joseph Sargent (The Taking of Pelham One Two Three). The one thing that stands out, though, is Harris. His performance is full of both weariness and passion. He is truly believable as a man who started a great nation.

Game of Thrones: The Complete Fifth Season (Blu-ray) The Hatching