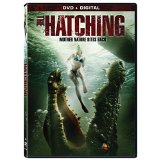 Here we go, yet another killer crocodile film to whet your appetites for fun, cheesy gore and perhaps a late-night scare or two.  Sure, the thought of another killer crocodile film may cause some (OK, many) to roll their eyes, but in the killer-animal genre, it’s the crocs and gators that still manage to get my attention.  Perhaps it’s because I’m a Florida boy, born and raised, and around these parts it’s not much of a surprise to hear about gators being found in the strangest places.  With The Hatching bringing us some cold-blooded horror out of the UK, I figure I’ll test the waters with this film from across the pond and see what it has to offer.

Three young boys decide one night that they are going to break into the local zoo; while on their late-night escapade, the boys have an accident, and one of them doesn’t make it out alive. After being away from his home in Somerset, Tim (Andre Lee Potts) returns after 15 years following the death of his father.  It’s not long after Tim’s return to Somerset that people and animals start to disappear, leaving only a trail of body parts behind.

There is nothing wrong with the film’s setup other than its all-too-familiar premise; after all, this isn’t a film setting out to change the genre, but instead just entertain its audience for 90 minutes.  The only parts that managed to make me cringe were the attempts at humor; the film wants to be funny, and at times the audience may snicker, but in doing so I felt it detracted from the other elements that worked.

Director Michael Anderson was smart to not linger too heavily on the actual crocodile effects; if even less footage of the croc was shown, it would have only heightened the suspense.  This goes to the ideology of “less is more”, and as a viewer I can’t help but think about how well Jaws managed to pull this off.

Filling up the cast of characters is an oddball assortment from those who live in the village.  It’s Tim’s love interest, Lucy (Laura Aikman), who seems the most out of place, and the villagers welcome her with open arms.  I wanted to see something more done with her character rather than be “just the girlfriend”, but that’s all she really is given to work with.  Then we have Russell (Jack McMullen) and Lardy (Danny Kirrane), who have been written to be virtual knockoffs of Shaun and Ed from Shaun of the Dead. An homage is one thing, but this got to be too much for me.

Looking past the film’s detractors, it does still manage to deliver its fair share of violence and gore, and after all, that’s what we’ve tuned in for.  With the buckets of blood and gore and plenty of dismembered body parts, The Hatching does deliver in the gore, though at times it does come off looking a little too schlocky.  While this isn’t a film that will leave its mark on the horror genre, it does still have its charms, and it’s better than the last batch of Lake Placid sequels, so that’s sort of saying something.  Lower the expectations and enter at your own risk, and you just may have a good time with this one.

Brent Lorentson is a horror writer and film critic based out of Tampa, Florida. With a BA in Digital Film, he co-wrote and co-directed Scavenger Hunt. His short stories have appeared in various horror anthologies. In 2019 his short script Fertile Blood will be a part of the anthology horror film Slumber Party. He is currently working on his first novel A Dark and Secret Place set to be released in late 2019. Favorite Films: Taxi Driver, Fight Club, I Saw the Devil, The Wild Bunch, Dawn of the Dead, A Clockwork Orange, Pulp Fiction, Heathers, The Monster Squad, and High Fidelity.
The Bible Stories: Abraham Room (Blu-ray)