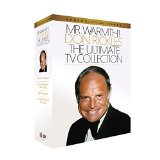 Who would have believed that one of the world’s most enduring if not exactly endearing comedians actually got his start in a serious drama? The film was Run Silent Run Deep, and the actor was Don Rickles. For a couple of years the former nightclub funny man would pursue the world of serious acting. That was until his friend Dean Martin made him a staple of his famous television roasts. Rickles became a standout, and his unusual brand of humor took off like a rocket to the stars. It’s those very stars that helped make the man a household name that would bear the brunt of his fast and furious barrage of insults and put-downs. Most of them laughed in return, and soon it became a badge of honor to endure an attack from Rickles. The only thing worse than being insulted by Don Rickles was being ignored by Don Rickles. He earned such names as Mr. Warmth and the Merchant of Venom. What he really earned was the respect of several generations of fans. Today kids and adults alike know him as the voice of Mr. Potato Head from the Toy Story films and shorts. At nearly 90 years of age the funnyman has quite a legacy to look back upon. Now Time Life has given us the opportunity to do a little looking back ourselves with the 8-DVD set The Ultimate Don Rickles.

The set begins with the 6-disc complete CPO Sharkey series. The comedy series only ran two years from 1976-1978. In fact Don was never afraid to rib himself about how short his television run was. He blamed it on the fact that there were other shows on at the same time.

CPO Sharkey may not have been an original idea. He played a chief petty officer in the Navy who was in charge of a band of recruits. It was merely a framework where Rickles could work in his usual routine. Much of the show’s formula included Rickles insulting and berating his charges. If that sounds at all like you’ve heard it before, it’s because you have. This is basically a more modern version of Phil Silvers’ Sergeant Bilko. There was less scheming in Sharkey and more insult, and that was what made it fall so quickly. There weren’t a lot of clever situations to build even a short excuse for a story, and there was never an audience for the show even if Rickles continued to be the hot ticket on the road. You get both seasons on six discs.

The remaining two discs cover Rickles’ four television specials in the 1970’s. These were also a bit hit-or-miss, but there are some golden moments to be found in each and every one of them. Each special comes with a new introduction by Rickles himself. He’s certainly looking his age now, but the wit is still there.

The show begins with a wonderful interplay between the men. They’re sitting in chairs and pretty much just talking. Adams and Rickles share some rather funny memories, and there’s a lot of chemistry and entertainment to be found just watching these guys sit and talk. I would have loved for there to have been more of this.

Skits included Rickles playing a famous monk on the set of a movie about his life. Adams plays the director, and this is the best skit on the show. Goulet sings a medley of songs that includes some unintentional humor. A fly is buzzing him the entire time, and we can see it because the camera is often tight on his face. To Goulet’s credit he manages to ignore the pesky insect. There’s a wonderful segment where Rickles sits down with three real psychiatrists who talk to him about his particular style of humor and try to do a little analysis on the fly. There’s a skit about a hostile couple and another where Harvey Korman plays a hippie guru running a “hotel” where Rickles and his bride come to stay for their honeymoon.

Don’s guests were Juliet Prowse, Anne Meara and Harvey Korman. Johnny Carson guests to introduce the show. The best stuff here is when Rickles goes into the audience and interacts with them. Of course, he’s insulting them, and this becomes a staple on the future specials.  Juliet Prowse does a song-and-dance routine with Elton John’s Honky Cat, and a spoof of the Oscars for medical professionals brings cameos by Bob Newhart, Don Adams, and Carroll O’Connor. There’s another song-and-dance number where Prowse is teaching Rickles how to sing and dance. Rickles plays a hostile United Nations security guard in a skit that features a cameo by Barney Miller’s Steve Landesberg. The weakest material here is a two-part skit with Rickles and Meara playing newlyweds in Vegas for their honeymoon.

The show gets off with a bang as John Wayne appears as a “mystery guest” who wants to tell jokes. He’s wearing a mask in case the jokes don’t go over well. Of course, they’re terrible, but Wayne soon gives up the mask and has a pretty good time with Rickles. A few weak skits follow that include Don’s famous family tree and a pretend sit-com taping. A radio show segment allows Don to try to mess up a script that Jack Klugman, Bob Newhart, and Loretta Swit have to stick to no matter what Rickles says for his own unscripted lines. It’s hit-or-miss. There’s a mini-roast of Rickles by Dean Martin and an airport skit that’s only funny because Steve Landesberg can’t keep himself from cracking up to deliver his lines. Rickles and Helen Reddy do a duet I Just Wanna Be Friends, and it ends with a great moment between Rickles and Frank Sinatra. It’s the highlight of the show and should not be missed.

From time to time Carroll O’Connor appears as a backstage hand offering a quick quip about what we just saw. It’s very much like the two old guys from The Muppet Show. Short but very funny. One of these segments features Martin Milner and Kent McCord in their Adam 12 characters.

The show starts with Rickles singing his signature I’m A Nice Guy that ends up featuring cameos by others who have their own verses including the shark from Jaws and Larry Linville with Loretta Swit in their M*A*S*H characters. Rickles moves into a skit he did with audience members in a previous show but this time with only one audience member along with James Caan, Elliott Gould, and Michael Caine. It’s another hit-or-miss routine. Rickles also has his “alter ego” back stage who has a song-and-dance routine with Michele Lee.

One of the best routines has Rickles dying and being judged at heaven’s gates. It’s not going so well as the judge thinks all he does is insults people. Rickles calls Don Adams as a character witness, and that backfires badly. Finally Jack Klugman appears to defend him. The skit includes a few lame movie spoofs until a lengthy segment where Klugman and Rickles play out a scene from Inherit The Wind in black and white. This is actually a powerful drama piece with Klugman giving one heck of a performance. It’s not something I would have ever expected on a comedy special. I’m not sure how it went over then. But it’s a piece that’s worth the price of the set to see for yourself.

The collection includes additional and extended footage from Mr. Warmth and a TV Land Legends Award given to Rickles by Jimmy Kimmel. It’s notable for the guests in attendance. There’s a full table of M*A*S*H actors that’s quite impressive. It aired on 4/26/2009.

Of course there are audio and video limitations on all of this material. It’s vintage stuff, and none of it was originally shot for preservation. It’s unfortunate but still quite a comedy treasure to get your hands on. I’ve always enjoyed Rickles with David Letterman. They were some golden moments that I’d like to see released one day. It’s a deserved collection at a reasonable price. All I can really say about Don Rickles at this point is, “I’m watching you”.

Gino Sassani is a member of the Southeastern Film Critic's Association (SEFCA). He is a film and television critic based in Tampa, Florida. He's also the Senior Editor here at Upcomingdiscs. Gino started reviewing films in the early 1990's as a segment of his local television show Focus. He's an award-winning recording artist for Omega Records. Gino is currently working on his 8th album Merchants & Mercenaries. Gino took over Upcomingdiscs Dec 1, 2008. He works out of a home theater he calls The Reel World. Favorite films: The Godfather, The Godfather Part II, The Body Snatcher (Val Lewton film with Karloff and Lugosi, not the pod people film), Unforgiven, Gladiator, The Lion King, Jaws, Son Of Frankenstein, The Good, The Bad And The Ugly, and Monsters, Inc.
Batman v Superman: Dawn of Justice Vikings Season 3 (Blu-ray)