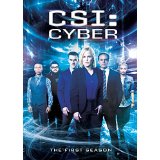 For over 15 years the CSI franchise has been a solid stable of programming for the Eye Network. The original show blasted through all initial expectations and lasted for 15 years. CSI: Miami went on for a decade, and CSI: New York for a little over five years. Now the original has bowed out of the game, and after 30 years of seasons, the franchise’s future hangs with newcomer CSI: Cyber. All dynasties eventually come to an end. Some pass quietly in the night. Others do so quite horribly. After watching the short 13 episode run of CSI: Cyber, I’m afraid it’s the latter path for a once-brilliant franchise. Catch it while you can, if you’re interested. While it will be back this fall, I do not anticipate a long life for a show that is CSI in name only. Now is your chance to decide for yourself.

It all starts with Patricia Arquette as Avery Ryan. The character was first introduced in a back-door pilot the previous season on CSI. She is a psychologist who had her files hacked and made public. The resulting cybercrime caused one of her patients to die. So she joined the FBI and somehow became the nation’s leading authority on cybercrime and now heads that team for the FBI. Forget that this is a weak character back story. It’s too much been there, seen that. Characters who change the course of their lives over a death are cheap shortcuts trying to gain sympathy from the audience. But let’s overlook that for now. The fact that she became such a knowledgeable techie in whatever time there was is completely unbelievable. It’s hard to believe she was even much of a psychologist. Human empathy is something I find in neither the character nor the actor.

The only saving grace for the show is found in some of the supporting cast. Shad Moss brings the most color to an otherwise drab field. He plays Brody Nelson, a former black hat (criminal) hacker. He once brought down the New York Stock Exchange for three days. Instead of going to prison, he’s serving his time working for the good guys in the FBI. Brody brings an energetic character who has the passion and self-confidence missing almost everywhere else in the show. He’s the light that can’t be dimmed. He’s joined by Peter MacNicol as Director Simon Sifter, who brings a certain element of authority to the show. It’s unfortunate that the former Numbers veteran is leaving the show to make room for Ted Danson’s character to make the jump here from the mother ship. It’s the right idea; Danson has been very good in the CSI universe, but he’s replacing the wrong character.

The rest of the cast is either terribly miscast or struggling. Hayley Kiyoko plays Raven. She’s another one of Ryan’s converts from the black hat world. She once shut down the entire New Hampshire power grid. She’s a relatively fresh presence but is made too much in the mold of the geeky blue-dyed-hair social misfit. The actress appears a little over her head for most of the scenes she’s in. I think it’s more an issue with casting than the actor’s actual abilities. But she’s not as bad as Ryan’s number one agent Elijah Mundo, played by James Van Der Beek. He’s about as unenthusiastic as they come. When he and Arquette share a scene, it’s the perfect cure for insomnia. There isn’t enough energy between them to light a tiny LED display.

The character/actor with the most potential would have to be Charley Koontz as Daniel Krumitz. He’s the real tech genius in the team and the guy who brought down Brody. They have a bit of chemistry going on that has the potential to go somewhere. Brody’s been forced on him as his kind of partner, which he resents because he’s the one who tried to put him in prison. There’s banter here that, at times, breaks up the overall sleepy quality of most of this show’s running time.

Beyond the cast, I find that this show breaks one of CSI‘s biggest taboos. They throw things out there that are completely cut off from reality. Ryan works on a misguided “instinct” that is usually wrong. They cuff and stuff several plane passengers because the wi-fi went off on eight planes. They even raised our def-con level. Now, there are over 2,000 planes in the air at any one time. I’ll bet a dozen of them have wi-fi glitches. I’m not sure that it rises to the level of raising our military alert status. In another episode they wish to cause a traffic jam to slow down the escaping bad guys. They hack the traffic lights, but instead of turning them all red, they turn them all green because it’ll cause the biggest snarl. Yeah, that’s true, but how many people got killed by getting T-boned in an intersection because both streets were moving traffic through at speed? They too often jump to conclusions and have tech doing things it simply can’t do. Baby monitors without a camera can’t capture video. A motion chip in a phone can’t create an animatic that extends to hand movement and interaction to the point of animating a murder.

If you are a fan, you’ll get all 13 episodes along with a half-hour feature on the characters, an f/x feature, and a look at the show’s sets and props along with a gag reel.

The series loves throwing out tech terms in an obvious attempt to scare the viewer straight. The show begins with the “this could happen to you” warning. The truth is that cyber-crime is absolutely a huge threat, and it’s about time a series focused on that kind of crime. I just hoped it wouldn’t have been done so badly. Perhaps the series was rushed. With the mother ship ending, CBS didn’t want to take a chance on a season without CSI. I get it. But the franchise is now tainted. There’s a retool coming, but I doubt it will do any good. When you take the poor research and dull cast and then stretch the stories to their limit… well…”It’s just not adding up for me.”

Gino Sassani is a member of the Southeastern Film Critic's Association (SEFCA). He is a film and television critic based in Tampa, Florida. He's also the Senior Editor here at Upcomingdiscs. Gino started reviewing films in the early 1990's as a segment of his local television show Focus. He's an award-winning recording artist for Omega Records. Gino is currently working on his 8th album Merchants & Mercenaries. Gino took over Upcomingdiscs Dec 1, 2008. He works out of a home theater he calls The Reel World. Favorite films: The Godfather, The Godfather Part II, The Body Snatcher (Val Lewton film with Karloff and Lugosi, not the pod people film), Unforgiven, Gladiator, The Lion King, Jaws, Son Of Frankenstein, The Good, The Bad And The Ugly, and Monsters, Inc.
Star Wars: The Force Awakens (Blu-ray) The Making of the Mob