The Making of the Mob 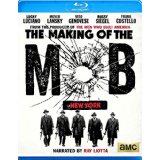 “From the chaos of the New York City streets rises a legion of visionary gangsters. Vicious killers and criminal geniuses determined to create their own version of the American Dream.”

If you are looking for an actual documentary on the evolution of the mafia and famous Five Families of New York, this is absolutely a bad place to start. I’m a bit uneasy with AMC’s use of the word documentary next to drama on this series. It pretty much follows the book The Last Testament Of Lucky Luciano by Martin A. Gosch and Richard Hammer. While neither author is listed in the show’s credits as writers, I have found the material pretty much supports that narrative of the story. That’s fine, except the book itself has been the subject of controversy since it was first published in 1975. At first there was a rumor the material was based on recordings that Lucky made while in exile in Italy. The authors never made that claim but did claim the material came from various sit-downs between Gosch and Lucky in the early 1960’s just before his death. I’m very sure it’s the story he might have told. But we’re talking about a huge ego here, and much of it is embellished, just as much of Making Of The Mob: New York is quite embellished. This is no history lesson. But is it entertaining.

On that score, I enjoyed the show quite a bit. The format is a pretty solid one. Ray Liotta narrates the story, giving this show every bit the feel of a documentary you might find on A&E or the History Channel. There’s almost a built-in authority coming from Liotta, because he provided the narration for the classic film Goodfellas as well as served as the film’s star. But that authority is steeped in the same kind of fiction as the material presented here. That’s not to say there isn’t some balance. The material is often supplemented with interview clips from several “authorities” on the mob. Some of these are equally based on knowledge from actors who are known for playing mobsters like Chazz Palminteri (A Bronx Tale), Joe Mantegna (The Godfather Part III), Frank Vincent (Goodfellas/The Sopranos) and Vincent Pastore (The Sopranos). You might call them the color commentary offering up the glitter notes. Some of the information comes from authors of mob books, and then there is info from descendants of the principals and even an alleged “former mob associate”. The most credible information comes from former New York City Mayor Rudy Giuliani, who was part of the Reagan Justice Department and credited with bringing down many an actual mobster.

Outside of all of this documentary-styled material there is a drama series taking place just as if it were a normal drama production. You have a pretty solid cast and pretty sweet production design. Here we see these stories acted out. They are often violent and bloody. This isn’t the kind of thing you might want to watch if you’re not up to the graphic depictions found here. The show doesn’t shy away from the violent acts; it appears to celebrate them by lingering on the images and repeating many of the same images over and over again.

That repetition is also a big part of everything on this show. I often wish alternative edits would be made on these kinds of shows once they go to video. After each commercial break these kinds of shows always give us recap information that is just dull and unnecessary when you’re watching the episode without interruption. I should be careful here, or guys like a former CBS president who believed viewers WANTED to see commercials might get the idea that the solution here isn’t to edit the show but to include the advertisements. So maybe I won’t spend any more time complaining about that.

The series tells us that they are focusing on five historical mob figures: Lucky Luciano, played by Rich Graff, Meyer Lansky, played by Ian Bell, Frank Costello, played by Anthony DiCarlo, Vito Genovese, played by Craig Thomas Rivela, and Vegas inventor Bugsy Siegel, played by Jonathan C. Stewart. But the focus is really on Lucky. It’s his life that runs the narrative. The series begins with his arrival in America and pretty much ends with his death. The series makes him out as the founder of what we’ve come to know as the mafia. It’s a wonderful story. Much of it is unlikely to be true.

If you want to approach this from the entertainment angle, we have to talk about the performances. Rich Graff actually auditioned for another role on the series but was pegged for Lucky. He’s a good choice, but not a great one. The acting is solid, but he doesn’t pull off the grandiose stature that the material attempts to make him out to have. In fact few of the actors here have a larger-than-life presence, and it takes a bit away from the enjoyment. I suspect the fact wasn’t lost on the people making the decisions. If you have strong actors, you don’t have to hype the power so much in the narrative. It would come across in the performances. It just doesn’t happen here.

The best thing the show has going is a nice production design that does a solid job of placing us into the historical context of the material. Better casting and less attempt at documentary might have been better choices. It could have turned a very average television event into a truly great one.

You get eight episodes on two discs. The only extras are some bonus footage in short 2-minute segments. “That just about takes care of the whole thing.”

Gino Sassani is a member of the Southeastern Film Critic's Association (SEFCA). He is a film and television critic based in Tampa, Florida. He's also the Senior Editor here at Upcomingdiscs. Gino started reviewing films in the early 1990's as a segment of his local television show Focus. He's an award-winning recording artist for Omega Records. Gino is currently working on his 8th album Merchants & Mercenaries. Gino took over Upcomingdiscs Dec 1, 2008. He works out of a home theater he calls The Reel World. Favorite films: The Godfather, The Godfather Part II, The Body Snatcher (Val Lewton film with Karloff and Lugosi, not the pod people film), Unforgiven, Gladiator, The Lion King, Jaws, Son Of Frankenstein, The Good, The Bad And The Ugly, and Monsters, Inc.
CSI: Cyber – Season 1 House of Lies: Season 4