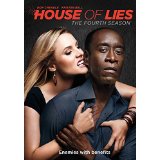 I don’t find House of Lies funny. In fairness, I don’t think it’s supposed to be funny, or it’s trying to be funny in the most cynical and unpalatable way possible. It’s a half-hour format airing on Showtime, which would normally suggest a sitcom. It’s not a sitcom, but a brash dramedy. Our main characters all have MBA’s but frequently act like teenagers on drugs. They are smart enough to analyze things brilliantly but are so corrupt that they will do the absolutely worst thing possible if it satisfies their personal interests. House of Lies should not be confused with House of Cards, which also features high-level leaders with horrendous morals. It seems to promote undiluted self-interest at all costs.

The show is based on a tell-all book (House of Lies: How Management Consultants Steal Your Watch and then Tell You the Time) by Martin Kihn. The main character on the show is Marty Kaan, played by Don Cheadle. It’s safe to say that the Showtime series is heavily fictionalized and is not about Kihn.

At the start of the fourth season Kaan is in jail with a famous electric car designer and owner of Gage Motors, Ellis Gage Hightower (Demitri Martin). This will be one of the major plotlines of the 12-episode arc of season 4. Hightower comes off a little bit like Steve Jobs, because we really don’t know what Elon Musk (Tesla Motors, Pay Pal, Space X, Solar City) is really like, except he has been compared to a real-life Tony Stark. His eccentric personality makes him a perfect prey for the predatory Kaan.

Kaan’s closest associate and partner is Jeannie van de Hooven (Kirsten Bell), who also happens to be pregnant with his baby. Marty and Jeannie have had a rollercoaster relationship while working together but are presently not in a relationship. Marty is focusing his bedroom activity on Denna Altschuler (Mary McCormack), who is a highly successful billionaire white-knight corporate investor. There are two other core members of Kaan & Associates, Clyde Oberholdt (Ben Schwartz) and Doug Guggenheim (Josh Lawson). Oberholdt is almost more despicable than Kaan but without any real power. Guggenheim is the one character who stands out because he is the one who tends to be gullible, upbeat, and innocent despite having an excellent analytical mind. His presence tends to make the episodes more palatable, because he provides a more human contrast to the vulture-like activities of the others.

The main selling point of the series is Cheadle, who is one of the best actors alive and has been consistently nominated for Emmys and Golden Globes for the show. His character is complex and is a fantastic part for anyone, but especially a black actor. Television has been accused of not giving black actors enough opportunities, but that clearly is not the case here. Cheadle grabs the part where it hurts and runs with it. But that alone is not enough to save the show from being a somewhat unpleasant and voyeuristic look at avarice gone amok. House of Lies does appeal to the same audience that watches House of Cards. We do take secret pleasure in seeing characters overcoming great odds, even if they are pretty terrible human beings, but I personally felt a little dirty just watching the show.

The Making of the Mob Noma: My Perfect Storm (Blu-ray)