Posted in: The Reel World by Archive Authors on April 1st, 2016 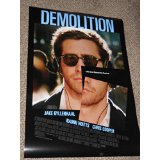 Have you ever had a traumatic loss? Have you ever lost someone and felt numb? How did you feel about the person you lost, and was it different now that they were gone? Do you think you acted appropriately about the death? Did you care about what people thought of you, or were you in your own little world? Were you ever the same again? Demolition stars Jake Gyllenhaal, Naomi Watts, and Chris Cooper, and is directed by Jean Marc Vallee. Vallee has directed two outstanding and Oscar-nominated films in the last couple of years, Dallas Buyer’s Club (Matthew McConaughey and Jared Leto won Best Actor and Supporting Actor) and Wild (Reese Witherspoon and Laura Dern nominated). Jake Gyllenhaal has been on a fantastic run of totally committed and intense performances (Prisoners, Nightcrawler, Everest, Southpaw, Enemy, End of Watch) for the last few years, and Demolition is no exception.

Davis Mitchell (Gyllenhaal) has a great life. His wife adores him and has an incredible job as an investment banker working for her father, Phil (Chris Cooper). In the narration he mentions that he probably shouldn’t say how much his firm manages, because it would be unethical, but he does anyway ($6,000,000,000). He seems blissfully oblivious to problems in life. Then in an instant his wife is gone. She was killed in an accident while driving and talking to him sitting next to her. He escapes unscathed.

Demolition is about Davis. How did the accident affect him? Is he suffering trauma from the accident, or is suffering from the loss of his wife? This is where a complex psychology starts to play out. I can describe how Davis acts, but I think it’s more important to look at the issue of survivor’s grief. No two people grieve in the same way. Some of the types of responses are denial, anger, guilt, lethargy, fear, confusion, powerlessness, social withdrawal, obsessive thoughts, restricted emotions, loss of concentration, and numerous variations and combinations in between. Phil and Margot (Polly Draper) are the grieving parents, and their reaction is different than Davis’s reaction. Their methods of coping are totally different, and therefore they are not ideal support systems for each other.

Davis’s emotions manifest in many unusual and unpredictable ways, which leads him off on his own journey. It will seem a strange journey to almost anyone who watches this movie. At one point he makes an odd connection with a woman who has read letters that has written to a vending company that turn out to be the vehicle of his self-expression. Davis’s relationship with Karen Moreno (Naomi Watts) develops slowly and is more an emotional outlet for both of them than something more committed. She has a son (Judah Lewis) who also becomes a new avenue to explore. There are times when Davis seems to be coming completely unhinged, and there are other times when he seems to be coping better than anyone else.

Ultimately this is a film that Gyllenhaal and Vallee have come together to craft. It’s a brave and risky film that could only be made by people at the top of their game. It might not be an easy film, but anyone who has suffered a devastating loss will understand how important and confusing the process of grief can be.