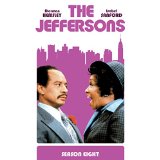 Earlier for our Maude Review I talked about the All In The Family “coaching tree” and the number of spinoff that show produced. Maude was the first, but the most successful by far has to be The Jeffersons. The family moved into the house next door to Archie Bunker early in the first season of All In The Family. While Norman Leer always intended Sherman Hemsley to play Archie’s black nemesis, the actor wasn’t available for the role. Thinking ahead, the show introduced another actor as Uncle Henry to spar with Archie for a while. The son Lionel would also change actors over the years. There is no doubt that when Hemsley finally appeared as George Jefferson, the chemistry between him and Carroll O’Connor was instant magic.

The families would be neighbors for four years when the network, seeing the popularity of the Jefferson family, decided it was time for them to move it on up to the Eastside. George’s chain of dry cleaners was making good money, and they could finally afford a “De-Lux” apartment in the sky. In addition to Hemsley as George and Isabel Sanford as wife Louise “Weezie” Jefferson, the cast included Mother Jefferson, played by Zara Cully. She hated her daughter-in-law and was always turning up her nose at the woman. She thought George was such a wonderful husband. Of course, he wasn’t. Like Bunker he was racist and a crude man. He also had a temper, often coming out of his insecurity at being rather short. He never spoke when shouting worked just as well.

Lionel would be played by Damon Evans, and then Mike Evans, who had also played the role earlier. The family got a live-in maid named Florence, played by Marla Gibbs. She didn’t take any of George’s bluster and could hold her own in an insult-trading match. She would eventually leave to be in her own short-lived show called Checking In. George also had to deal with some eccentric neighbors in his condo. Paul Benedict played the always-intruding-at-the-wrong-time Bentley. He was an Englishman, and his encounters with George often widened his cultural gap with things American. George’s own prejudice got in the way with his relating to the mixed-racial marriage of Tom Willis (Cover) and Helen Willis (Roker). They were friends with Louise but never really get along with George.

Stories often started with George’s anger or stubbornness over some event or issue and usually led to some consequence with his family and others. George loved to flaunt his wealth and tried to provoke racial actions out of others so that he could act upset over them.

Season 8 saw its share of fan-favorite episodes. My Maid…Your Maid has the family trying to find Florence’s replacement. Of course, the couple have very different ideas as to what they want in a maid. The inevitable clash is classic Jeffersons. I’ve Still Got It uses the standard misinterpretation of events for comedy. When George is having a bit of a mid-life crisis, Louise sends flowers from a “secret” admirer to try to give him some confidence. George thinks they’re from his secretary, and the fun ensues from there. With Checking In failing quickly, Florence comes looking for her old job back in the two-part episode Florence Did It Different. In Dog Gone, George is handed the responsibility to watch a dog which promptly dies, leaving George in a panic. A Case Of Self Defense is quite relevant today. When a string of robberies worries George, he secretly buys a gun, because Louise is against the decision. Of course, it leads to a scary experience for George. I believe strongly in gun ownership, but maybe even I wouldn’t put one in the hands of George Jefferson. In the two-parter The Strays, George gets stabbed trying to thwart a robbery. Maybe he should have kept that gun after all?  It all ends with one of the shows most unfortunate episodes. Tom’s dream brings the cast into characters of the Old West.

The show was finally cancelled with absolutely no fanfare at the end of its 11th season. The cast was pretty upset that they learned about it through the media and not through contact with CBS. There was never a finale to close the show, and the actors would go on to reprise the characters on other shows including a stage production over the years. Fans would get the chance to say goodbye to the characters through those efforts. Now you can relive season 8 through this Shout release that gives you all 25 episodes on three discs. Unfortunately, there are no extras to be found here. But if you’ve been missing a certain family in the Eastside, “I got something you want.”

Gino Sassani is a member of the Southeastern Film Critic's Association (SEFCA). He is a film and television critic based in Tampa, Florida. He's also the Senior Editor here at Upcomingdiscs. Gino started reviewing films in the early 1990's as a segment of his local television show Focus. He's an award-winning recording artist for Omega Records. Gino is currently working on his 8th album Merchants & Mercenaries. Gino took over Upcomingdiscs Dec 1, 2008. He works out of a home theater he calls The Reel World. Favorite films: The Godfather, The Godfather Part II, The Body Snatcher (Val Lewton film with Karloff and Lugosi, not the pod people film), Unforgiven, Gladiator, The Lion King, Jaws, Son Of Frankenstein, The Good, The Bad And The Ugly, and Monsters, Inc.
NYPD Blue: Season 9 Tuesday Round Up: April 5, 2016