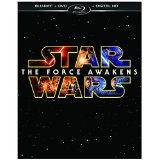 Not that long ago, in a theatre that was hopefully not too far, far away from your galaxy home…chances are you settled in to enjoy Star Wars: The Force Awakens. The movie went on to become the highest-grossing film of all time in the U.S., and this week you can bring the Force home. You can actually already check out our review of Disney’s Blu-ray release for Star Wars, along with our thoughts on Showtime’s House of Lies: Season 4.

Banshee: Season 3, from HBO, is a real scream. Meanwhile, RLJ Entertainment throws us a Curveball and was kind enough not to keep The Hoarder all to itself. Shout! Factory cops to NYPD Blue: Season 9. Finally, Lionsgate starts at the very beginning with The von Trapp Family: A Life of Music and has it made in the shade with Mojave.