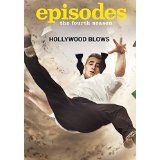 David Crane struck television gold after creating not just one of the biggest comedies of the 90’s but one of the biggest shows of all time when he created Friends.  Love it or hate it, Friends was a series you just couldn’t escape while it dominated the ratings through its 10-season run.  Well over a decade since the show has gone off the air; it’s a show that continues to thrive in syndication.  And that is where Episodes picks up, the show from Friends creator David Crane and starring Matt LeBlanc, who plays himself in a show that parodies the life of a fading celebrity who is struggling to find his next big hit.

The new season picks up with Sean (Stephen Mangan) and Beverly (Tamsin Greig) attempting to get a new show of theirs green-lit as their previous show “Pucks” teeters on finally being cancelled.  Sean and Beverly are the charming anchors for the show and are the real stars of the show as we follow along with their struggles with the Hollywood system; every time they seem to get ahead and have control of their new series, it comes with a cost.  The struggles seem to be so absurd but could easily have been situations that television writers encounter on a daily basis.

When it comes to Matt LeBlanc, it seems this character for him in many ways is a relatable one, despite it clearly being a parody.  Seeing as his celebrity is diminishing, we also see his character get hit with the unfortunate situation of going through some financial trouble after discovering his financial manager has stolen money from him.  With a divorce looming over him and seeing how his net worth is on the edge of taking a plunge, Matt needs a big paying gig, and soon.  One of my favorite moments from the show occurs when Matt is paid to make an appearance at a party for certain controversial figure. This also leads to one of the more humorous cameos in the series.

It’s when the show departs from the back lot of the Hollywood studios and we get to see Matt interact with his family and friends.  As the season progresses, we get to see cracks in his ego as he slowly comes to terms with what is most important in his life. Though the show is careful not to keep things too serious, as we have moments of levity like when he shows his kids how to draw a frog (let’s just say it looks like something far more crude and hilarious) and leads to artwork he’s proud to hang on his refrigerator.

John Pankow makes a return to the show as the sleazy producer Merc Lapidus, who comes in to stir things up for all parties involved as he’s looking to green-light a new game show.  For Sean and Beverly, though, even with their new show being picked up, its Sean’s former writing partner who returns to the scene who presents most of the show’s conflict (at least that’s not connected to LeBlanc).

The show for me seems to be a bit of Curb Your Enthusiasm meets Californication. It’s a show that has plenty of charm and a few laughs but took a while to hit its stride with this season.  By the time I found myself invested in the characters, the season was just about wrapped up.  The shows three leads are what make the show work; the misstep I felt was with a storyline with Beverly’s friend Carol (Kathleen Rose Perkins) and her budding lesbian relationship with a new studio executive. For me it was just a storyline that got in the way of the bigger picture just to have a relatively predictable outcome.

Overall the show has more hits and laughs than misfires.  While it’s not a show I feel everyone just has to watch, it’s still a show worth giving a shot if you still have a hankering for seeing one of your favorite cast members from Friends.  LeBlanc is the highpoint of the show, and I hope this can open more doors for him; after all, I’m still trying to forget the baseball film that had him paired with a chimpanzee.

Brent Lorentson is a horror writer and film critic based out of Tampa, Florida. With a BA in Digital Film, he co-wrote and co-directed Scavenger Hunt. His short stories have appeared in various horror anthologies. In 2019 his short script Fertile Blood will be a part of the anthology horror film Slumber Party. He is currently working on his first novel A Dark and Secret Place set to be released in late 2019. Favorite Films: Taxi Driver, Fight Club, I Saw the Devil, The Wild Bunch, Dawn of the Dead, A Clockwork Orange, Pulp Fiction, Heathers, The Monster Squad, and High Fidelity.
Grace and Frankie: Season One Contest: Win Last Shift On Blu-ray From Magnolia Home Entertainment