Grace and Frankie: Season One 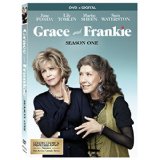 Outside of The Golden Girls, there haven’t been too many TV shows where the entire main cast is eligible for social security. Then again, chasing the 18-49 demo that advertisers covet isn’t much of a concern for a subscription-based service like Netflix, which debuted Grace and Frankie last year. Naturally, the series — whose four main actors are each 75 and older — has its share of geriatric humor. (Although the broken hip doesn’t occur till Ep. 5/“The Fall”.) More importantly, it also has some genuinely funny things to say about companionship and reinvention.

Grace (Jane Fonda) and Frankie (Lily Tomlin) mostly interact with each other because their respective husbands — Robert (Martin Sheen) and Sol (Sam Waterston) — are law partners. When Robert and Sol invite Grace and Frankie out to a fancy dinner, the wives expect them to announce their retirement. Instead, they get the shock of a lifetime: Robert and Sol reveal that they’re gay and have been in love with each other for 20 years.

Obviously, the news throws Grace and Frankie for a major loop. The duo decide to move into a beach house Robert and Sol had bought years earlier as an investment. The show’s first season follows the simultaneous arcs of high maintenance Grace and hippie dippy Frankie learning how to be single for the first time in 40 years, along with Robert and Sol gripping with the first openly homosexual relationships of their lives.

The main Odd Couple pairing of Grace and Frankie is pretty standard sitcom stuff, so it’s no surprise one of the show’s creators is responsible for one of the biggest mainstream TV comedy hits of the last 20 years. The show is created by Marta Kauffman (Friends) and Howard J. Morris. On the surface, Grace and Frankie represents the antithesis of the young and sexy cast of Friends. However, the show ultimately has more in common with the classic multi-cam/laugh track sitcom format than it does with most of its current comedycontemporaries. (This despite the fact that Grace and Frankie is a single-camera show with no laugh track and plentiful F-bombs.)

That being said, Grace and Frankie is at its best and most relatable when it explores the title characters’ burgeoning friendship and shows them navigating their breakups. Grace and Frankie’s coupling originates out of necessity — their friends are either too awkward around them, or aren’t very good at hiding their pity — but it nicely evolves into a genuine (if prickly) bond over the course of these 13 episodes. The show also has them frequently interacting with their exes, and Grace and Frankie smartly allots enough time to also show things from Robert and Sol’s perspective. In addition to figuring out finances and coping with their adult children, Grace and Frankie also carves out time to show that Sol will miss having someone who enjoys watching the Spelling Bee on ESPN as much as he does, and that Robert will miss having a head-turner like Grace by his side from now on.

The punchlines — “Try to be straight for one more brunch” — could come off as creaky in the hands of a less capable cast, but the actors here absolutely elevate the material. Fonda is totally game for the various indignities the ironically-named Grace has to suffer under her new circumstances (such as being ignored at a grocery store, online dating and…throwing herself into dancing on top of a bar to “Get Low”), but the standout here is her 9 to 5 co-star Tomlin. The actress, who earned an Emmy nomination for her work here, is having something of a renaissance. (She also starred in last year’s well-received indie Grandma.) Here’s, she’s the caustic, hard-of-hearing heart that keeps the show from becoming too precious. She and Fonda have great chemistry.

Same goes for Sheen and Waterston as Robert and Sol, who could easily be the stars of their own show with some minor tweaks. Sheen’s subtle, more sensible work is a nice counter to Waterston’s big-hearted performance. (Sol can’t stop enabling Frankie.) Even though the most we see out of Robert and Sol is the occasional peck, the duo make for convincing companions. The supporting cast is rounded out by Brooklyn Decker and June Diane Raphael as Grace and Robert’s high-strung daughters, along with Ethan Embry and Baron Vaughn as Frankie and Sol’s adopted sons. A storyline involving Embry’s recovering drug addict Coyote harboring intense feelings for Decker’s Mallory doesn’t really generate much interest. I was much more amused by Raphael’s work as Brianna, who is as confused by single life as her mom. Guest stars for the first season include familiar faces like Corbin Bernsen, Christine Lahti, Ernie Hudson, and Craig T. Nelson as a potential love interest for Grace.

Grace and Frankie: Season One features all 13 episodes on three discs. The bonus material includes a “Beginning of the End” featurette, along with a Gag Reel, Audio Commentaries on select episodes featuring Fonda, Tomlin, and series creators Kauffman and Morris, and a Season 2 Sneak Peek. Season 1 ended with wedding bells in the air…and an unexpected re-coupling that could threaten those nuptials.

The second season of Grace and Frankie is set to debut on May 6, and Netflix has already renewed the show for a third season. The series doesn’t set out to reinvent the sitcom wheel, but it’s worth a watch if you want to see some old pros at or near the top of their game.