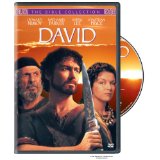 I am by no means an expert on the Bible. That is why I am always anxious to see filmed representations of the stories, since most of my knowledge comes from other people. It’s always an interesting topic, and so many people have their own interpretations. I think that is the point. I think discussion of the Bible allows people to express their own inner thoughts about their relationship to God. But I long ago gave up on the idea of ever getting a clear picture of the meanings of the stories. There will be plenty of people who will tell you they know all the answers, but I sincerely doubt anyone has any such thing. I previously reviewed Abraham from this series, which was an earlier story in the history of the Jewish and Christian faiths. The reign of King David took place approximately around 1010 to 970 B.C., but this movie also incorporates the reign of Saul who preceded David. The first thing I should say is that these stories are crammed with acts of violence and human weakness.

Two fine actors start this story. Saul (Johnathan Pryce) is searching for some lost sheep and told to go to the wise man and prophet Samuel (Leonard Nimoy). Samuel proclaims that the Lord God has said Saul shall be king. Saul is a humble man who grows more and more gripped by the demands of his power as King. He often breaks God’s commands in the belief that is best for his people. Samuel becomes more and more irate at Saul’s lack of faith in God’s word. Samuel leaves to find the new King who will take Saul’s place. Saul is generally well-intentioned but constantly making decisions against God’s will. I should say that God’s demands are often very violent, calling for the death of every man, woman and child who opposes his people.

Samuel looks among the sons of Jesse of Bethlehem, and there are many. The youngest is David, who even though small, is fearless. The story of David and Goliath is included here, and then that leads into the story of David (Nathaniel Parker) and Bathsheba (Sheryl Lee). Both of those are well known to almost everyone on the planet. Despite the familiarity of the stories, this 170-minute presentation gives a greater context to our understanding of its place in our history. As I said, all these characters are sinners and give in to weaknesses of every kind. There are great wars in which the Jewish people must fight to preserve the kingdom of God. Almost every kind of evil is displayed in the Bible, and God is always a mysterious figure in these stories, and his judgements are often beyond our understanding.

The Bible Collection is comprised of 13 stories of which David is one. They were all originally broadcast on TNT, and David, specifically, was broadcast in 1997. It was filmed in Morocco, which is a good stand-in for the areas surrounding Jerusalem. It is low-budget, which means most of the battle scenes are skimped on, but overall it’s well acted and handsomely mounted. I will soon be reviewing Samson and Delilah, which is another story for which I want deeper understanding and perspective. Sooner or later, I might actually read the whole book that these stories come from. I hear it’s very popular.