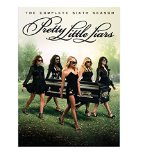 When it comes to Pretty Little Liars, it seems making the fans crazy is what they do best. The fifth season of the show is out on DVD, and this is no place for beginners. If you don’t know who Aria, Spencer, Emily, Hannah, and Alison are, it’s time for you to head back to the beginning and catch up. You can find our reviews from those seasons here. For the rest of you, let’s talk Pretty Little Liars, shall we?

Season 6 of Pretty Little Liars is different from any of the seasons that came before. It’s common that shows with large gaps in the middle of the season split the story into very distinct season halves. That has always been true of this show, but never has it been more dramatic than this year. There are just 20 episodes, which is down from the run’s high of 26 episodes last year. These episodes are split into even 10-episode blocks that define clear milestones in the show’s history.

The first 10 episodes deliver pretty much more of the same. The season picks up with last year’s cliffhanger. The girls have been captured by A and are trapped in the bizarre world of a dollhouse facility. Of course, they escape along with new character, Sarah (Davis). She has been a prisoner there for years and shows a lot of the strain of her captivity. The Liars each find their own way to deal with the experience. Needless to say there are going to be some new nightmares. Secrets begin to be revealed in record numbers even for this show. It all leads to a possible unknown member of Allison’s family who had quite a lot of skeletons in the closet.

I have to say that I found this stuff the most interesting run of the show. It finally looks like we can put some concrete things into the 5-year mystery. You get the impression that you’re getting somewhere, and things are starting to make some kind of sense. It’s true. By the 10th episode you will finally know who A was all along and why they were driven to the actions of the last five years. Flashbacks from earlier episodes will help to pull all of the pieces together. Obviously, I’m not going to tell you any of these secrets. It will be far more fun to discover them for yourself. I will say these episodes are the best of the series. The best part is that there FINALLY appear to be consequences for the Liars. Look, I know they were victims, but these are not good people. Not really. The town begins to lash back at them. They are barred from their prom and graduation. Of course, they’re going to show up at prom, and someone’s going to get hurt…duh. I also liked the moments when the moms do the sleuthing together. This works and would have been a cool thing to have seen throughout the show. It’s like Pretty Little Liars: The Next Generation. Of course, you might need a bald mom to really make that work.

Then things get a little crazy. When the show returned months later, the show had jumped forward five years in time. The Liars have all left Rosewood for college and lives away from A and each other. But now A is asking to be released, and the girls return to testify. They only expect to be here a couple of days, but an unexpected death causes them to remain, and a new “A” starts to taunt them all over again.

While it was somewhat interesting to see the relationships change a bit because of the time and distance, the characters themselves don’t change as much as the show runners want you to think they have. A change of clothes and hairstyle are all you really get. OK, they’ve changed the guys in their beds, but that only matters to the “ship” fanatics out there. I know, that’s most of you, right? I found the entire premise to be rushed and incredibly forced. The show no longer feels smooth and well-paced. It begins to feel like someone is just making it up as they go along. The stories and the relationships resort back to the same thing only more awkward. The production also changes up a little. The “A” texts have a different on-screen look, and the sanitarium has been changed into a posh hotel by Hanna’s mom.

The collection features all 20 episodes on five discs. You get a couple of deleted scenes and features on the “ships”, the time jump, and the characters’ evolution. Time jumps are not something new, so it’s not really all that clever or unique. Most shows that used them were in their own final years. The Mentalist and Desperate Housewives come to mind. Both shows were milking a premise that was getting old and needed some shaking up. The problem is by the time the executives realize something like that, it’s probably too late, and I predict this next season could well be the end of Pretty Little Liars. We’ll see. Expect the next season to end with “game over”.

Gino Sassani is a member of the Southeastern Film Critic's Association (SEFCA). He is a film and television critic based in Tampa, Florida. He's also the Senior Editor here at Upcomingdiscs. Gino started reviewing films in the early 1990's as a segment of his local television show Focus. He's an award-winning recording artist for Omega Records. Gino is currently working on his 8th album Merchants & Mercenaries. Gino took over Upcomingdiscs Dec 1, 2008. He works out of a home theater he calls The Reel World. Favorite films: The Godfather, The Godfather Part II, The Body Snatcher (Val Lewton film with Karloff and Lugosi, not the pod people film), Unforgiven, Gladiator, The Lion King, Jaws, Son Of Frankenstein, The Good, The Bad And The Ugly, and Monsters, Inc.
The Bible Stories: David Drunk Stoned Brilliant Dead: The Story of the National Lampoon (Blu-ray)