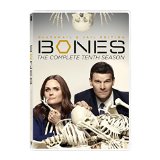 Dr. Temperance Brennan, or Bones, (Deschanel) is the world’s leading bone specialist. She works in Washington, D.C. for the famous Jeffersonian (I assume it’s intended to be the Smithsonian). Her talents have proven themselves very helpful in solving crimes where skeletal remains are all that there is to go on from the victim. Her FBI agent/liaison is Seeley Booth (Boreanaz). Together they have an uneasy relationship that grows into a kind of friendship and eventually a marriage with a young daughter. The problem is that Bones doesn’t have a ton of social skills. She relies on Booth to guide their social interactions. More on that later. The lab is run by Dr. Camille Saroyan (Taylor), who has become a bit of a guiding mother to the team. Dr. Hodges (Thyne) is the trace-elements expert and tries very hard to be cool and hip. He’s generally the opposite of Bones. He says pretty much what comes into his head and is a bit of a science-fiction geek. Angela (Conlin) is an artist who uses her skills to reconstruct facial details from the skulls. She also works on enhancing images and restructuring evidence. She’s a bit of a romantic and has probably slept with every male in the lab. But Angela and Hodges are now married with a son. The lab also has a few interns who show up from week to week, likely depending on actor availability. This year we lost Dr. Sweets. Dr. Sweets (Daley) was a young FBI agent and psychologist. He profiled victims and suspects as well as served as a counselor to the team. He was a bit over-eager at times, looking up to Booth as a mentor of sorts. His replacement comes in the form of young and eager FBI Special Agent Aubrey played by show newcomer John Boyd. Aubrey talks like something out of a 1950’s gangster movie g-man role. He eats all the time. This 10th season he’s trying hard to get Booth and the gang to trust him.

The worst problem is the Bones character herself. She’s not likeable at all. She’s arrogant to a fault. She always talks about being the best and how she’s the natural hero role model for others. But her scientific brain is to the point of cruelty. She has to have non-emotional explanations for everything. She insults with impunity. They also stretch the idea that this highly-educated woman doesn’t know any slang or figures of speech. She’s always misquoting a popular saying as if she were just learning English. It’s too contrived, and the writers reach pretty far for each of those “jokes”. Gone now is the sexual tension between Booth and Brennan. Now they are openly together and expecting another little one.

The show marks its 200th episode with a bit of a change of pace. They play it out like a 1950’s Hitchcock film complete with a Technicolor look. Each of the actors plays a different role that is somewhat like their character. It’s pretty much a spoof of To Catch A Thief. They try to play the leads off as if they were Cary Grant and Grace Kelly. It’s an amusing episode, and I like Boreanaz, but he’s no Cary Grant, and Deschanel doesn’t hold a candle to Grace Kelly. It’s all done in fun, and that’s how you have to watch it. It just didn’t work for me at all.

The writers and filmmakers take pride in offering the most bizarre of crimes and victims. You can expect a gross body in each episode. There is also a good share of interesting cases to go with those bodies. But they have also started to hit the audience over the head with their politics. It becomes most apparent in a death penalty episode where the team realize they may be sending the wrong man to death just days before his execution. It’s a story that a ton of shows have done. But this one uses it so the characters can talk about how unfair and barbaric we are. It begins the push for Hodges and Angela to buy a home in France. The problem here is that accuracy doesn’t appear to be their strong point. They’ve taken a page out of Dan Rather’s book and are using fake circumstances to make a political point. This man is scheduled to be executed just seven months after he was arrested as a serial killer. Serial killers can’t even get to trial in seven months. Even if they don’t appeal, the first one is automatic. Rarely does an execution occur within a decade of arrest. Usually it’s far longer.

When a show starts to become overtly political, it is risky. You chance alienating half of your fan base. Bones is a show often on the bubble. You guys can’t afford to be throwing fans off the bus. Keep it up, and you’ll get to make that real season finale soon.

The release also includes a gag reel, deleted scenes, and a celebration of the 200th episode.

After 10 years, the show is running out of steam. There’s an obvious belief that this was going to be their final season. There is a lot of closure going on as the episodes run toward the season finale. Booth has a relapse of his gambling addiction because of a case he works on. Hodges and Angela come into new money and are planning to move to Paris to escape the American violence and death. The last episode has Booth and Bones leaving their jobs and riding off to the sunset leaving behind those they’ve trained in the jobs. But they will be back for an 11th season after all and even a crossover with Sleepy Hollow. It would be easy to watch this season believing it to be the last, and perhaps it should have been. But alas, “that would be imprecise”.

Gino Sassani is a member of the Southeastern Film Critic's Association (SEFCA). He is a film and television critic based in Tampa, Florida. He's also the Senior Editor here at Upcomingdiscs. Gino started reviewing films in the early 1990's as a segment of his local television show Focus. He's an award-winning recording artist for Omega Records. Gino is currently working on his 8th album Merchants & Mercenaries. Gino took over Upcomingdiscs Dec 1, 2008. He works out of a home theater he calls The Reel World. Favorite films: The Godfather, The Godfather Part II, The Body Snatcher (Val Lewton film with Karloff and Lugosi, not the pod people film), Unforgiven, Gladiator, The Lion King, Jaws, Son Of Frankenstein, The Good, The Bad And The Ugly, and Monsters, Inc.
The Huntsman: Winter’s War Elvis & Nixon