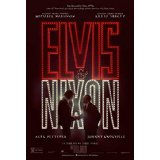 “You must be kidding.”

It is the most requested photograph from the White House archives. I’m talking about a photograph of Richard Nixon with The King. This particular King’s kingdom wasn’t a nation or political group. Of course, I’m talking about Elvis Presley, the King of Rock and Roll. The meeting occurred in the days before Nixon installed his infamous recording equipment and long before that fateful break-in at Watergate. So no one really knows what was said in the meeting. Now director Liza Johnson attempts to take us behind the closed doors of the Oval Office on that fateful day in December of 1970 when the leader of the free world met with the leader of a generation. Elvis And Nixon is a whimsical look at what might have been said that day. I can’t tell you how close she got to the truth. I can tell you this story is worth telling anyway. It was certainly worth watching. Take it from a long-time history teacher. American History was never this much fun.

It started with a bored Elvis (Shannon), who has decided that there are some serious problems facing the youth of America. He believes that drug use, Communist brainwashing, hippie movements, and subversive student groups are hurting the country. He believes that his unique position as a rock star would allow him to reach these troubled kids and make a difference, if only he had some authority from which to proceed. He decides he could be an undercover Federal Agent At Large and secretly work for the Nixon administration. So he writes a letter and delivers it unannounced at the front gate of the White House. He’s requesting a meeting with Nixon to talk about the issues and his usefulness as said agent. The impromptu advance took Nixon (Spacey) by surprise, and after a bit of an awkward dance the meeting was arranged.

Elvis did something few people were able to do with Richard Nixon. He took him off guard, and Nixon’s staff would later marvel how relaxed and at ease the man was during the meeting in which Presley pretty much made himself at home, breaking several protocols in the process. He even presented the President with a handgun, which he had a little trouble getting into the meeting. In fact, a weapons check provides one of the more humorous moments in the film, as Presley was known to pack several weapons about his person.

“Elvis is in the building.”

The subject has been handled on film before, but never in such an artful and entertaining way. Michael Shannon looks nothing like Elvis Presley. Even decked out in the style, he can’t pass for more than a poor Elvis imitator, a point that the film even pokes some fun at. Shannon doesn’t attempt to do an over-the-top imitation of the singer. Instead he plays a rather laid-back Presley with a lot of humor that comes not from anything he’s really attempting to do, but rather from the deadpan performance that forces you to leave all of your preconceptions of both Presley and Shannon far behind. It’s a performance that draws you in and never lets you go. It’s a caricature, in many ways but not in the exaggerated sense you are used to. It’s actually quite hard to explain. You really have to see it to understand. You won’t be sorry.

Of course, Kevin Spacey has had some practice playing America’s Commander-In-Chief of late on the critically acclaimed House Of Cards. Here he has Nixon down solid. He captures the cadence of the man’s voice without dipping into the tired old impersonations. He does it with the large movement of arms and shoulders that instantly identify the man. Most important is the amazing chemistry when these two actors and their characters come together. It’s as unlikely as the original players but like that moment in 1970 there’s an instant, quite odd simpatico between them that no one saw coming. They are instantly comfortable with each other in a decidedly uncomfortable way. I know that makes no sense at all. Trust me, it will once you’ve seen it.

The film is loaded with great supporting roles. Alex Pettyfer plays Elvis’s loyal friend Jerry Shilling who accompanied him to Washington for his meeting with Nixon. Shilling was one of the few real friends Elvis had who wasn’t there for the fame or the perks that went along with it. Pettyfer does an outstanding job of delivering that emotional attachment. Johnny Knoxville is pretty much playing himself as Sonny, the other friend on the trip who really does love the lifestyle of being with the star. On the government side you have Evan Peters, the Fox/X-Men version of Quicksilver that brought one of the best scenes to the last X-Men film. He plays Dwight Chapin, one the administration workers who makes the meeting happen. It’s a very different role from the rebel version of Quicksilver, but Chapin is up for the task. Coincidentally, Nixon is a prominent character in that film even if the two characters don’t share screen time. Colin Hanks is Chapin’s partner, Egil Krogh, and these two also share the kind of camaraderie that makes us believe these guys have been working together for a while.

The pacing of the film is tight. The 86 minutes will fly by, and you’ll find yourself wondering where it went. This is a fine job of script development, editing, performance, and directing that doesn’t waste a minute of your time. The whole story is there and it was fun to witness unfold. The production does a wonderful job of delivering that early 1970’s feel. It starts with perfect opening credits combined with a soundtrack that takes you back. Then there’s a production design that pays attention to the details, but not in a “look at me” fashion sense. It’s all quite invisible and authentic.

When you look back at how Elvis lost his life relatively young, it almost appears like a black humor joke that he was so serious about being a federal agent. It’s all true. He was obsessed with law enforcement and collected badges and accepted honorary police force positions all over the country. He was genuinely a fan of police officers and wanted very much to earn their respect in return. The beautiful thing about it all is how close to the truth the movie actually comes. It has always surprised me that no one has come up with a television series premise based on the “what if” Elvis really was an undercover agent. This one ends up my early favorite as best film of the young year. Take my advice and see it. It’ll be a limited release, and you shouldn’t waste time. Afterward you can email me to say, “Thank you. Thank you very much.” 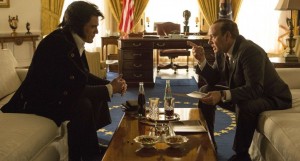 Gino Sassani is a member of the Southeastern Film Critic's Association (SEFCA). He is a film and television critic based in Tampa, Florida. He's also the Senior Editor here at Upcomingdiscs. Gino started reviewing films in the early 1990's as a segment of his local television show Focus. He's an award-winning recording artist for Omega Records. Gino is currently working on his 8th album Merchants & Mercenaries. Gino took over Upcomingdiscs Dec 1, 2008. He works out of a home theater he calls The Reel World. Favorite films: The Godfather, The Godfather Part II, The Body Snatcher (Val Lewton film with Karloff and Lugosi, not the pod people film), Unforgiven, Gladiator, The Lion King, Jaws, Son Of Frankenstein, The Good, The Bad And The Ugly, and Monsters, Inc.
Bones Season 10 Lady in the Car with Glasses and a Gun (Blu-ray)