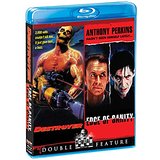 Anthony Perkins is arguably most well known as Norman Bates, the hotel owner with mommy issues from Psycho. While Hitchcock’s film was groundbreaking for the horror genre (and Hollywood in general), I find it strange that Perkins’s career did not improve with such a commercial hit. He had certainly acted in other projects prior to Psycho, but his name is not one that I see very often. In other words, I have never “happened upon” an Anthony Perkins film, I seek out films in which he has acted. As a matter of fact, I can count those films on one hand: The Trial, and the three schlocky sequels to Psycho. This Blu ray double feature contains two films produced in the late 80s between Psycho III and Psycho IV, towards the end of his career.

I must admit that the first film in the pack, Destroyer, was a little disappointing. It started with an amazing concept: A famous director rents the space of an abandoned prison to film his “women in prison” sexploitation film. The film’s writer (Clayton Rohner) and stuntwoman girlfriend occupy the lead roles, and as the night full of production continues the crew is murdered by an ominous presence kept secret by the ex-prisoners living in the town. The film was competently crafted and well written, but the cover of the disc made promises that it could not keep. For example, when I see a picture of a gigantic, muscular man with a skull-like visage on the cover, I kind of want to see that in the film as well. To be fair, I most certainly got a muscular antagonist: Lyle Alzado, Former NFL defensive linesman of the Cleveland Browns, has a very large and intimidating presence. Now, the film did provide pretty creative ways to dispose of expendable characters, but after watching the “final showdown” between protagonist and antagonist, I felt let down because there was no amazing 80s special effects makeup grafted to the football star’s face.

Notice how I did not once mention Anthony Perkins in the paragraph above. The reason? He is barely in the film. He plays the role of the director, who occupies about twenty minutes of screen time (and that is a generous estimation). What are his defining characteristics? That is simple: acting like a complete misogynist to the lead actress, yelling at his tech-guy, and telling all the female extras to take off their clothes for the shower scene. This role gave him absolutely no opportunity to flex his prowess as an actor, which is very surprising, considering Roddy McDowall was originally slotted for the role. I love Roddy McDowall. It would have been more of a disappointment to see McDowall in this role, but it would have been nice to see the “star” of this double feature in the film a little more.

Fortunately, the second film in the pack, The Edge of Sanity, delivers the majority of the enjoyment I received from this combo pack. It is actually a very clever film. The basic concept is as follows: Imagine The Strange Case of Dr. Jekyll and Mr. Hyde, but add in the fact that Mr. Hyde is also Jack the Ripper. I was impressed by how well the two stories blended together, and I was equally impressed by the fact that the screenwriters were newcomers. Also, unlike Destroyer, Anthony Perkins is prominently featured as the film’s protagonist AND antagonist. It takes a skilled actor to develop subtle nuances that differentiate between two characters, and in the Jekyll and Hyde story, these nuances start blending together. Perkins definitely has a fantastic understanding of the original tale, as his blending of the two characters was the best I have seen in any adaptation of the story.

Overall, the pack is worth it for Edge of Sanity alone. Both titles are indeed well filmed and edited, but Destroyer lacks the sophistication that Edge of Sanity provides. The latter utilizes the camera in a way similar to an art house feature from Bertolucci or Truffaut. Both films are indeed fun to watch, but it is clear that the gem of this combo is Edge of Sanity. If your only exposure to Perkins is Norman Bates, expand your cinematic knowledge by watching this set.