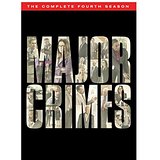 “Everybody here knows what a spin-off is.”

No doubt about it. Major Crimes has managed to do what few shows before it have been able to pull off. Shows have survived the loss of their lead, but the remaining years were usually something lesser than it once was. That’s not the case when The Closer lost its lead actress/character. The title was changed, and with just a few cast tweaks the series returned as Major Crimes, and I dare say it’s a much better show than its predecessor. Is it a spinoff? I might have to go to the replay booth to answer that one.

Pretty much the rest of The Closer’s cast remains intact. The senior officer on the team is Lt. Provenza (Bailey); he’s still partnered with Lt. Andy Flynn (Denison). It’s a good combination, as both characters spend the season feeling the effects of age. Andy is injured early on and has to deal with being out of full action. It’s a nice change-up where you can’t just jump on a moving van and walk way with a small scrape. Lt. Tao (Chan) is still one of the tech experts, along with Buzz (Keene), who also serves as the videographer of the unit. Buzz gets a promotion to reserve officer, but he’s still pretty much the guy with the camera. Detective Sanchez (Cruz) is back after being forced into six months’ suspension and taking anger management classes. He still loses his cool a little, but I found him an awkward character this season. The delivery has changed to an almost deliberate tight, calm cadence. He’s obviously struggling to keep his temper under control. He does get to let go of an old rage this season when new information about his wife’s final days comes to light. Dr. Morales (Del Arco) has a bit of a testy relationship with the police unit this season. It’s nice to see some strain here. The unit also includes Kearran Giovanni as Detective Amy Sykes. She gets to have a huge arc in the final five episodes of the season. I like that we’re seeing more of her. Nadine Velazquez as the unit’s D.A., Emma Rios might be the driest performance of the season. The standout character has to be Lt. Provenza, played by M*A*S*H’s G.W.Bailey. The character is actually a lot like that show’s Rizzo. Just pretend that he finally got out of the Army and got into law enforcement. He’s always complaining and getting into trouble, but he’s smart, and his instincts are often dead on.

Rusty (Martin) has become my least favorite character of the show. He gets a lot to do this season, and the more he does, the less I like him. He’s not really a good guy. He lies to Raydor and the unit who give him incredible access. That means he jeopardizes cases by doing what he wants without much regard for anyone else. He ends up apologizing a lot, but there are never consequences, so his behavior doesn’t change. I wouldn’t mind such a awful character if the show were not somehow trying to say he’s a nice guy. The show has diminished the more screen time Rusty gets. His blog pulls him into the investigation of an unidentified murdered girl. He ends up in a relationship with both her killer and the brother who had been searching for her. In true Rusty form he ends up treating both badly for his own wants. He obviously has no respect for the people who care about him. Enough of Rusty already.

The stories and characters continue to take center stage. There are some strong guest appearances. Jamie Bamber, whom we’ve previously interviewed Here, stars as a photographer suspected of killing a supermodel. He’s been spying on his models through a computer virus, and he’s a scumbag either way. Patricia Wettig guest stars as the mother of a murdered son and a judge with a “hanging” mentality. Of course, Tom Berenger returns as Raydor’s ex-husband and slimy lawyer, Jack. This time he might have manipulated things too far as a potentially innocent man is in prison while Jack leverages the case for a big payday. The season ends with a wedding.

The real star of the season is the five-part season finale, Hindsight. It begins when a ballistics expert matches the gun used to kill a young mother and her infant son to a decades-old case that involved the death of a cop, a D.A., and her bodyguard. Amy ends up in the middle when she’s asked to contact a disgraced cop from the case. If the character name of Mark Hickman (Gedrick) sounds a little familiar, it’s because it’s an obvious allusion to real-life disgraced office Mark Fuhrman from the O.J. trial. Like Fuhrman, this character was accused of planting evidence in the original case and letting a cop killer go free. Amy’s hiding her talks with Hickman from Raydor, and it only complicates things.

There are no shortage of crimes and suspects in this epic episode that connects the current crime with “one of the worst cases in L.A. history”. The cop killer became a reverend, often referred to as Reverend Cop-Killer by the unit. Is Rev. Daniel Price (Lowe) really a changed man, or is he running drugs out of his church? It’s enough case to fill five episodes for this strong season finale.

There are 23 episodes on five discs. The only extras here are deleted scenes on select episodes and a gag reel. Next season is going to be the final season of the series. It looks like it will go out while still at the top of the game, for the most part. If you take out the Rusty storyline, this show truly is one of the greats. “More than great, inspired.”

Gino Sassani is a member of the Southeastern Film Critic's Association (SEFCA). He is a film and television critic based in Tampa, Florida. He's also the Senior Editor here at Upcomingdiscs. Gino started reviewing films in the early 1990's as a segment of his local television show Focus. He's an award-winning recording artist for Omega Records. Gino is currently working on his 8th album Merchants & Mercenaries. Gino took over Upcomingdiscs Dec 1, 2008. He works out of a home theater he calls The Reel World. Favorite films: The Godfather, The Godfather Part II, The Body Snatcher (Val Lewton film with Karloff and Lugosi, not the pod people film), Unforgiven, Gladiator, The Lion King, Jaws, Son Of Frankenstein, The Good, The Bad And The Ugly, and Monsters, Inc.
Sisters: Season Three The Finest Hours (Blu-ray)