Posted in: Disc Reviews by Archive Authors on May 26th, 2016 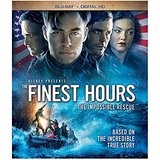 There are many films that depict the ferocity and cataclysmic power of the vast ocean. It is a fearsome display that cannot be imagined in any way that compares to the reality of the experience. The Perfect Storm, Life of Pi, The Guardian, and Titanic are just a few examples of disasters at sea. It is the United States Coast Guard’s job to rescue distressed people under severe emergencies at sea. The Finest Hours is a depiction of a true-life sea rescue under the most challenging and horrifying conditions. It is known as the most successful small boat rescue ever recorded. When I say small boat, it is the rescue boat I’m talking about, but the ship they were singlehandedly sent to rescue was a gigantic T2 tanker Pendleton, which had split in half on open seas. Part of the problem was that another tanker had already split in half a few hundred miles away, and all resources had already been diverted in that direction. The second tanker was an afterthought that was tackled by a relatively inexperienced crew. To repeat the true-life situation, T2 tankers SS Mercer and SS Pendleton were split in half off the New England coast. The Pendleton had lost radio communication and was only identified by an alert citizen from the shore.

The Finest Hours is a Walt Disney film, and I think Walt would be proud. The film takes place on February 18, 1952, and all of the American values that were part of this country at the time are on display. It is a very old-fashioned film in both look and approach. The only difference is that modern-day technologies are fully utilized to show an amazing true-life display of courage that would have been impossible to do in 1952.

Boatswains Mate First Class Bernie Webber (Chris Pine) is the central focus of the movie. Pine gives maybe his best performance as a somewhat shy and wishy-washy Coast Guard officer ultimately rock-solid in courage, determination, and core values. He has been shadowed by somewhat unsuccessful attempts previously and so was not in the vanguard of rescue attempts. A big part of the story is devoted to his rather charming and hesitant romance with Miriam (Holliday Grainger), who then becomes a dynamo in supporting Bernie when he is out at sea during the storm.

The cast is full of terrific actors, all doing a fantastic job of bringing this somewhat forgotten event to life. Eric Bana, Casey Affleck, Ben Foster, and many others are uniformly excellent. It is a movie on a grand scale that is simply about the saving of lives. It is about average people banding together selflessly and heroically, because it is very simply the only thing to do.

The Finest Hours is presented in its original aspect ratio of 2.39:1. The 1080p image is arrived at with an AVC MPEG-4 codec at a nicely constant bit rate of 35 mbps. There are a couple of things going on with this high-definition image presentation, both resulting in appropriately muted color palettes. The period nature of the film gives the interior scenes a very warm color temperature. There’s a yellow-orange hue that gives you the feel of an older film. The movie takes place on a cold and stormy New England February day, and the result is a quite cold blue pale dominated by the low visibility of the weather conditions. None of this is to say the image is not sharp. Detail pops up in interior close-ups. The brass instruments of the Pendleton create vivid sharpness and detail, standing out in an intended display of contrast with the violent exteriors. The waves are played out in a somewhat slow-motion style that I’m not exactly in love with. The intent is to give you a full lingering view of the giant swell. The result makes them look a little too CGI for my tastes. Otherwise the cinematography contains some thrilling moments, to be sure. Black levels are average due to the necessary style choices here. Action does indeed get lost in the shadows.

The DTS-HD Master Audio 7.1 is not quite as aggressive in the surrounds as I expected. It more than makes up for this with one of the fullest and most dynamic audio presentations you might find. The subs join with the main speakers to provide a crushing reproduction of the thundering giant waves. The score is quite rousing, knowing just when to pull back for an emotional beat. There are some pretty solid surround moments, and linked with the full sound, you will get an immersive experience. Dialog cuts most of the time. To be honest, it would not be appropriate for it to cut through perfectly under these conditions. You won’t have to ride the remote, as the dialog is never buried except when the situation calls for it to be.

I’m disappointed in the extras. There is only one feature of any real value here. The rest of the pieces last 1-2 minutes and are nothing more than promotional pieces or trailers with a few cast and crew sound bites.

Against All Odds: (14:10) This is the one important feature. You get a chance to visit the small town of Chatham, where residents and historians recall the events of 1952. We get a nice perspective of the tradition of Coast Guard presence in the town. There is also a nice biography of Bernie Webber, including an appearance by his daughter.

Deleted Scenes: (4:27) There are two with a play-all option. The f/x are not finished. These must have been cut early in the process.

As I said, it is an old-fashioned film, and I mean that in the best possible way. It is about a time when we weren’t ruled by endless distractions. Life was simple. People did their jobs, and, for many, their jobs were their life. It has produced a very pure and beautiful movie experience that I thought we had all forgotten.