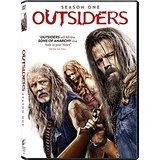 It seems every network has stepped up their game to compete for viewership with scripted television. WGN now has Outsiders. At first glance I wasn’t all that impressed with the trailers; after all, it seemed like a bad knockoff of Justified and Sons of Anarchy.  But the great thing about writing for Upcoming Discs is we get the opportunity to review titles we normally wouldn’t give a chance to.  Nothing against any show, but these days there is simply so much content out there it’s just about impossible to keep up with it all, and in the process there are some real gems that slip between the cracks.  As it would turn out, Outsiders is a show I’m happy to say it found its way into my hands, because it’s actually really entertaining.

Taking place in the Appalachia area of Kentucky, there is a feud brewing between the residents of a small town and a clan of people who live off the land in the mountains.  These “outsiders” are known to everyone as the Farrell clan and are led by Big Foster Farrell (David Morse).  The show takes its time introducing us to all the members of the clan and showing us their various customs and ways of survival. Some of their methods of survival even go so far as to break the law, something the Farrell clan seems to believe don’t apply to them.  It’s Big’s cousin Asa (Joe Anderson) who is the first to add to the conflict on the mountain after he returns from spending time trying to survive on his own in the big city.  Despite being family, Asa spends a good portion of the show trying to prove himself to the clan and declare his loyalty and in the process manages to stir up more conflict.

To complicate matters for the Farrell clan, a company has purchased the land where they live, and the company has plans to mine it for coal.  Problem is The Farrell clan has no plans of moving, and even the town has their misgivings towards the company.  The task of removing the Farrell clan form the hill has been given to Sheriff Houghton (Thomas M. Wright) who seems to have a better understanding of the clan than anyone else in the town.  As time ticks by, the tension builds between the clan and the coal company until it eventually boils over and blood gets spilled.

It does take a few episodes before the show seems to hit its stride. There are a lot of pieces to this story, and each character manages to have an agenda of their own, which of course means there is plenty of conflict to arise.  The problem is the initial conflict between the company and the Farrell clan feels as though they jumped the shark before the story even had a chance to breathe.  This is a story arc more suited for a third season of a series, not something to kick things off with, simply because it seems to limit where else you can go with it.  There are little side stories brought up that can lead to some bigger stories but nothing that carries the same gravity.

What works well in the show’s favor is right now I can’t think of another show like it that is still on the air.  I can’t help but pick up the Justified vibe from the show. Even the shows credit sequence at the start of each episode has a distinctly familiar look to it.   But it’s the little interactions in the show that have me looking forward to what is to come.  There is a storyline surrounding  moonshine that is giving me hope that we can see the Farrell clan take their product on a much more national scale, yet in doing so this could take away some of the show’s charm, so I’m curious to see what direction the showrunners plan to take this.

While I can’t say this is a show that can hang with the best of the best of current television, what it does have going for it is that this show has a lot of potential to be something special. Outsiders may not have the budget of shows that air on AMC or HBO, but the show’s creator, Peter Mattei, seems to have a good handle on his characters, who seem to have a very Shakespearian quality to them.

So for those of you looking to fill the void that Sons of Anarchy left following its series finale, Outsiders is a show that stands strong as a possible successor despite a slow start.  Tune in and check out who will rule the mountain; I have a feeling it’s going to be a long, bloody ride before everything is said and done.

Brent Lorentson is a horror writer and film critic based out of Tampa, Florida. With a BA in Digital Film, he co-wrote and co-directed Scavenger Hunt. His short stories have appeared in various horror anthologies. In 2019 his short script Fertile Blood will be a part of the anthology horror film Slumber Party. He is currently working on his first novel A Dark and Secret Place set to be released in late 2019. Favorite Films: Taxi Driver, Fight Club, I Saw the Devil, The Wild Bunch, Dawn of the Dead, A Clockwork Orange, Pulp Fiction, Heathers, The Monster Squad, and High Fidelity.
13 Hours: The Secret Soldiers of Benghazi (Blu-ray) The Lobster