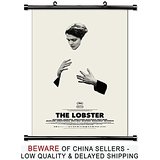 The Lobster could easily be in contention for one of the weirdest movies you’ll ever see. It’s certain to be the weirdest movie of this year. It isn’t weird in a pointless or flashy way. It isn’t weird just for the sake of being weird. It is low-key and tastefully filmed. It seems to fit comfortably in the tradition of absurdist or surrealistic comedy/drama. If you are familiar with the works of Kafka or Bunuel or Beckett or Pirandello or Ionesco or, more recently, Charlie Kaufman, you’ll understand the nature of absurdist cinema. Of course, Rhinoceros by Ionesco, Metamorphosis by Kafka, or Naked Lunch by William S. Burroughs are examples of people who transform into animals or insects. The Lobster does not attempt to portray these transformations very literally, although we do see animals representing people throughout the movie. The comedy is gentle, but insane and relentless in its constant twisting of logic. You won’t always laugh out loud, but your mouth is likely to be agape half the time. The film is built on a long collection of purposeful inanities drolly presented. It creates an alternate reality which is gentle in presenting its bizarreness and violence.

David (Colin Farrell) has been dumped by his wife, which forces him to go to a resort hotel with his brother, who is now a dog. David has 45 days to find a mate from the inhabitants of the hotel who are also without partners. If he doesn’t complete the task of finding a mate, he will be turned into the animal of his choice. In David’s case, that would be a lobster, which he chose for various logical reasons. In fact, David almost seems resigned to the fact that that will be his fate, and that’s fine with him. David’s reasoning, along with everyone else’s in the hotel, is faulty. The main difference is that David seems content and resigned to his fate.

Farrell put on weight for the role, and his mild and but expressive performance is a terrific anchor for the film. Every over-the-top concept that comes your way at a rapid pace in this movie is met with calm resignation. There is a high caliber of quality in the acting all around with terrific performers adding their own charisma to the fun including John C. Reilly (Guardians of the Galaxy), Olivia Coleman (Broadchurch), Ben Whishaw (Spectre), Lea Seydoux (Spectre), Michael Smiley (The World’s End) and Rachel Weisz (The Mummy).

Shortsighted woman (Weisz) becomes David’s ultimate possible mate, but only after a series of impossibly surreal events occur. It involves the anarchist opponent, Lone Leader (Seydox), to this twisted dystopian vision. She leads a motley crew of insurrectionaries to humiliate and undermine the cruel fates imposed by society.

We are used to cookie-cutter entertainment, but discriminating audiences are starved for highly original and offbeat films. The Lobster fills that ticket. Greek director Yorgos Lathimos, most notable previously for Dogtooth, is exactly the kind of mind that comes from a different place than Hollywood than can produce unexpected and challenging films. The Lobster might be too weird for most people, but, for discriminating audiences, it’s just weird enough.