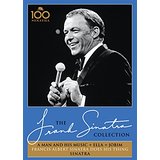 I’m not a fan of the “stand and deliver” method of teaching or concert specials. That’s what most of these shows are. It’s a bit strange for me to enjoy them as much as I do. Sinatra doesn’t use big screens with crazy images. There aren’t any pyrotechnics. He certainly isn’t doing any running or stage calisthenics. It’s just Frank with a microphone. But he’s always had the ability to cast a spell over his audiences both live or on a television screen. The music is front and center here with perhaps a guest or two and an orchestra playing behind him. It’s all Frank Sinatra ever needed, and these performances showcase that power about as well as you’ll find.

This special aired on NBC and would be the first in five annual Sinatra specials that would air around the time of his birthday. This one was intended to celebrate the singer’s 50th. The show has an interesting setup. You don’t see the orchestra until about halfway through the show, and there’s an attempt to provide showy settings as the stage area changes throughout. You never see the audience, which I consider a flaw on most of these shows. Frank had a unique relationship with his audience that is missing for most of these specials. The only other attempt at extra showmanship is a collection of newsreel early attempts at flight. We’ve seen them all before, and they introduce Come Fly With Me.

For the second annual special Sinatra moved over to CBS. This time he added his daughter Nancy to the mix, who had recently released two of her own hit records in Downtown and These Boots Are Made For Walking. Most of the hour follows the format of the first special. Frank sings many of his classics up until that time. Nancy does a solo song (Bang Bang (My Baby Shot Me Down)) and is soon joined by father Frank for a medley that includes her hits. They offer up some banter that isn’t quite as funny as they thought it was. The rest of the show has Frank back in charge and on his own. There’s a bit of a showy reflective piece where we see Frank contemplating between a collection of performances.

The show shifts back to NBC and includes two very special guests for the evening. Ella Fitzgerald was a legend herself and sings a couple of solo numbers here before joining Sinatra for a couple of duets. Their voices are sheer perfection here. But Ella looks uncomfortable and even a little angry at times while she’s singing. We never get any idea why, but it never shows in her voice. Brazilian composer Antonio Carlos Jobim joins Sinatra on guitar for a medley that includes his own compositions. While Sinatra has played his music for years and often referred to him as a friend, this is the only known filmed footage of the two performing together. What a treat that must have been for the members of the small invited audience.

Francis Albert Sinatra Does His Thing (1968)

It’s back to CBS in the established ping-pong annual specials. This time Sinatra went for a theme. He attempted to portray how black music has influenced pop culture at the time. To help him in this he had more guests. Diahann Carroll does a medley of spirituals with Frank and the Motown stars The Fifth Dimension. They sing a couple of their hits and then introduce “for the first time anywhere” the 6th Dimension…Frank Sinatra, all in Motown sequin and glitter. It’s a rather fun moment, and he joins the group for a song. This might well be the most animated of the specials. There’s a lot of diversity here with the sweet emotional voice of Diahann Carroll and then the energetic swinging style of The Fifth Dimension.

The last of the annual specials stayed at CBS and in spite of Frank’s promise that they were going to keep doing them until they got it right, this was the last of the series. This special also goes back to the show’s roots in a couple of different ways. Once again there are no guests, and we’re left with the magic of Frank’s voice. He also looks backward more on this show and sings mostly very early tracks. There is an exception to that rule, however. We get to hear him perform one of his recent, at the time, recordings. That song was My Way, and it would join The Theme From New York New York as two of Sinatra’s biggest concert anthems. That alone makes this somewhat of an historic performance as Frank now hits 55.

After nearly a decade Frank Sinatra returned to the television special format, this time on ABC. This is more of a celebrity showcase. A large number of guests join Frank, who doesn’t get to sing many solo songs this time out. The format was simple. A guest would sing a solo number and then be joined by Frank for a duet. Once in a while Frank would sneak another solo of his own between the acts, but this plays out like an A-list open mic.

It’s back where it all started on NBC 16 years later. Frank is joined by Count Basie and his Orchestra for a truly legendary concert by Frank Sinatra. It’s a classic look at the singer, who has now turned 66. His voice retains its silky-smooth quality even has he takes puffs from a cigarette between lyrics. Sinatra reveals his more modern numbers here with Something and The Theme From New York New York.

This time Frank Sinatra is on Showtime, and it’s pretty much a live concert recorded at the Altos de Chavon Amphitheater in The Dominican Republic. It’s a sweet open-air stadium, and the acoustics are perfect. I’ve attended open-air concerts, but none that sounded as flawless as this one did. The concert includes a great drum solo by the legendary Buddy Rich and an appearance by guitarist Tony Mottola on Send In The Clowns. Tony and Frank have worked together for decades, and it all shows here.

What else can I say about a collection like this? You get four discs that can be bough separately.  It’s entertaining and marks a collection of historical music moments in time. Frank’s gone, and we recently lost Frank, Jr. A collection like this helps to keep the music alive for all of us fans who are still out there. With the release of The Frank Sinatra Collection, I can honestly say, “It was a very good year.“

Gino Sassani is a member of the Southeastern Film Critic's Association (SEFCA). He is a film and television critic based in Tampa, Florida. He's also the Senior Editor here at Upcomingdiscs. Gino started reviewing films in the early 1990's as a segment of his local television show Focus. He's an award-winning recording artist for Omega Records. Gino is currently working on his 8th album Merchants & Mercenaries. Gino took over Upcomingdiscs Dec 1, 2008. He works out of a home theater he calls The Reel World. Favorite films: The Godfather, The Godfather Part II, The Body Snatcher (Val Lewton film with Karloff and Lugosi, not the pod people film), Unforgiven, Gladiator, The Lion King, Jaws, Son Of Frankenstein, The Good, The Bad And The Ugly, and Monsters, Inc.
Zoolander No. 2: The Magnum Edition (Blu-ray) Teenage Mutant Ninja Turtles: Out of the Shadows