Zoolander No. 2: The Magnum Edition (Blu-ray) 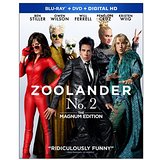 If Project Runway has taught us anything, it’s that “in fashion, one day you’re in and the next day you’re out.” To a lesser extent, that adage can also be applied to comedy stars, since audiences’ tastes seem to shift almost as often as style trends. (There was a point in time when Pauly Shore was a movie star…that really happened!) As a result, any sequel to 2001’s Zoolander — Ben Stiller’s really, really, really, ridiculously good looking absurd fashion satire —had the odds stacked against it.

The degree of difficulty, however, grew exponentially after Stiller and Co. waited 15 years to release a follow-up. The first Zoolander famously opened a few weeks after the 9/11 attacks, which probably contributed to its middling box office before the film found an adoring audience on home video. Zoolander 2 catches us up on the ensuing 15 years with a montage that tosses in a 9/11 swerve. This time, the NYC-related disaster is the collapse of the Derek Zoolander School For Kids Who Can’t Read Good, which results in a devastating loss for Derek (Stiller). Meanwhile, Derek’s rival-turned-best friend, Hansel (Owen Wilson) also suffered a horrific injury during the collapse, which puts the two world-famous male models at odds once again. We also learn that Mugatu (Will Ferrell), the unhinged mastermind who orchestrated the first film’s assassination plot, has been sentenced to a lifetime in fashion prison.

“You can’t kill us all…we will protect the Chosen One.”

The action picks up in the present day, when it appears that someone is hunting down the world’s most beautiful pop stars. (It’s been all over the film’s advertising, but the movie’s opening sequence features the amusingly over-the-top assassination of a certain Canadian sensation many people wish would go away for real.) Both Derek and Hansel are living in seclusion when Billy Zane (Billy Zane, reprising his role from the first film) informs them that the world’s reigning fashionista Alexanya Atoz (Kristen Wiig) wants them for a fashion show. The duo travels to Rome, where an agent from Interpol’s Fashion Division (Penelope Cruz) informs them of Derek’s connection to the assassination plot. The trip to Rome also gives Derek an unexpected chance to connect with his son Derek Jr. (Cyrus Arnold), who is…not at all what Derek was expecting.

Believe it or not, those two jam-packed paragraphs of plot summary don’t come close to covering everything that’s going on in Zoolander 2. There are also plot threads about the Fountain of Youth, the Garden of Eden, the question of Hansel’s parentage, and much, much more. You get the idea that Stiller — who sat in the director’s chair again and co-wrote the script with Justin Theroux, John Hamburg, and Nicholas Stoller — sensed that the time for a Zoolander sequel had come and gone. (Even the “current” Instagram and Netflix gags have a whiff of desperation, like an old guy who name-drops those things in an effort to show that he’s up with the trends.) The sad part is that there probably is a way to make a Zoolander sequel that properly satirizes our current selfie stick society. (To be fair, we do get a pair of pretty effective selfie jokes.) Unfortunately, the movie is much too scattershot to stick with any promising thread for too long.

The sequel vacillates between callbacks to the original film that lack their unpredictable lunacy (including a Wham! redux) and nonsensical celebrity cameos. The first Zoolander was packed with cameos, to be sure…I mean, Vince Vaughn randomly appeared — and never said a word — as Derek’s coal miner brother. But those appearances were largely part of the original film’s wacky tapestry. Here, it’s not hard to imagine Stiller riffling through his star-studded contact list whenever he was stumped for a punchline. There are way too many to mention here; the list includes Willie Nelson, Neil deGrasse Tyson, Susan Sarandon, Susan Boyle (seriously). But the only ones that truly stand out are the ones who play the movie’s stupidity overly straight (Kiefer Sutherland, Sting) or the rare appearance that approaches the inspired madness of the first movie (a nearly unrecognizable Benedict Cumberbatch, who flies away from the movie much too soon).

“I miss not knowing things with you.”

In fact, I found myself laughing more at the unforced, tossed-off one-liners (like the way Wilson seriously delivers the line “My mother doesn’t work here”, or Mugatu’s wackadoodle rant aimed at some of the world’s most famous designers) than many of the film’s overworked set pieces. Stiller doesn’t explore much new ground with the title character; Derek’s struggles with fatherhood feel secondary to his attempts to recapture his Blue Steel form. He still has a pleasing chemistry with Wilson, who is always a welcome presence here just because he’s the one person who never seems to be trying too hard. At the other end of the spectrum, Ferrell’s free-flowing insanity is good for some laughs, but Mugatu doesn’t even really appear until about one hour into the film.

Among the new additions, Cruz cuts a striking figure as the female lead (Stiller’s wife Christine Taylor, who starred as Matilda in the first film, mostly sits this one out), while Wiig amusingly leans into her character’s Donatella Versace-esque grotesqueness, but doesn’t quite get enough to do. Kyle Mooney pretty much nails his performance as an annoying double-talking hipster, but having Fred Armisen play an 11-year-old social media guru is more disconcerting than funny.

Zoolander 2 is presented in its original aspect ratio of 2.40:1. The 1080p image is arrived at with an AVC MPEG-4 codec at an average 30 mbps. There is certainly a lot of flash in this high-definition image presentation. Primary colors jump out pretty solidly. Reds and yellows are particularly bright. There are times when some digital noise of some kind invades, and this provides for relatively weak black levels. Yes, the image is sharp. Facial close-ups are impressive, and there are a lot of those. There’s surprisingly little texture when you consider the material here. It’s glossy hi-def digital at its core.

The DTS-X defaults to a DTS 7.1 audio presentation. The audio is often incredibly flat, failing to take advantage of any kind of dynamic range. It doesn’t matter if we’re talking the weak subs to the unimaginative surrounds, there is little here to show off anything but a cheap system. Dialog does cut through, and there are some nice source music moments.

The Zoolander Legacy: (9:02) Cast and crew talk about the impact of the first movie on them and why they joined the sequel. Of course, that’s mostly the new cast members. There’s plenty of talk about the cult following and the long road to get the sequel done. There’s a lot of blaming 9/11 for the weak box office of the first film. I’m curious what their excuse will be this time around.

Go Big Or Go Rome: (7:38) The best part of the film is the Rome locations. Cast and crew talk about working in Rome. You get some nice beauty shots of the Eternal City.

Drake Sather – The Man Who Created Zoolander: (8:26) This is a bit of a profile on the stand-up comic with some vintage footage. He passed away, so there’s a bit of bittersweet remembrances to be found here. You also get footage from the original short films that appeared on MTV’s Fashion Awards.

“I understand you wanna reconnect or whatever, but we’re too different, and it’s too late.”

Above all, Zoolander 2 seems infinitely insecure about its own existence, which is the opposite of its predecessor’s self-assured ode to self-absorption. This movie also joins Anchorman 2 and Dumb and Dumber To as recent comedy sequels that probably materialized well past their sell-by date. Even though there are actually some scattered funny moments here, Zoolander 2 will likely end up being the franchise’s eugoogly.