Posted in: The Reel World by Archive Authors on June 6th, 2016 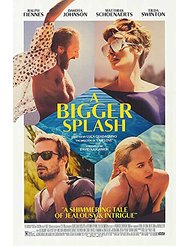 A Bigger Splash is a remake of a 1969 French film called La Piscine (The Swimming Pool) starring Alain Delon, Romy Schneider, and Jane Birkin. It was popular in its time and was challenging and mysterious but will not register in the memory of modern moviegoers. A Bigger Splash retains the same sense of adventurous storytelling and compelling ambivalence. A Bigger Splash stars Ralph Fiennes (Lord Voldemort from the Harry Potter series and the new “M” in James Bond movies Skyfall and Spectre), Tilda Swinton (a remarkable character actress who is different in every film), Dakota Johnson (Anastasia Steele in Fifty Shades of Greys) and Matthias Schoenaerts (Far From The Madding Crowd, The Danish Girl). That cast is dynamic by itself, and they are used to maximum effect. Ralph Fiennes, especially, is absolutely outstanding. He has never played a part like this before. His character could be described in many ways, because his moods shift radically.

Harry Hawkes (Fiennes) is a manic and effervescent record producer (The Rolling Stones and Mick and Keith are named-dropped). Marianne Lane (Swinton) is vacationing with her lover, Paul De Smedt (Schoenaerts). She is a famous rock star and is recovering from throat surgery. Paul treats her with love and devotion as she rests at a beautiful Mediterranean beach villa. Her ex-husband and former producer, Harry, descends on a plane and calls her without notice. He brings a formerly neglected and precocious daughter, Penelope Lanier (Johnson). Marianne seems very happy to see Harry, but Paul expects their peace and quiet will be totally unsettled. Harry is overwhelmingly charming and fun-loving, almost excessively so. His energy is almost off the charts at times. A true highlight is when Harry takes some boring bossa nova off the record player and changes to The Rolling Stones Emotional Rescue which Harry says he produced. Harry then starts to do a full-scale extended and uninhibited imitation of Mick Jagger’s dancing in the living room. It is an insane and electric sequence, but it is one of many that contribute to a long and slow build of indefinable tension.

There is confusion about Harry’s relationship with his daughter, because both of them seem to have a vague sexual connection. Paul is conflicted because Harry literally gave Marianne to Paul years before. Harry told Paul at the time, “It’s done. She’ll be happy with you”. Paul is suffering through his own feelings of tension because his career as a documentary filmmaker has stalled. He also feels uneasy about this unexpected visit.

A Bigger Splash is an attempt to bring back a more intelligent and adult approach to cinema, which has not been a big concern in modern filmmaking. It has emotions and actions that are not easy to interpret and show an unusual complexity in its depiction of characterizations and storytelling. Its roots are clearly in the tradition of European filmmaking in the last 70 years. It is an English language film, but everything about it screams challenging art film. The ending will have you arguing when you leave the theater. These are all good things and in short supply lately. A Bigger Splash is very welcome to discriminating audiences in an increasingly desolate marketplace.