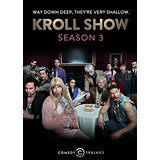 Sketch comedy is always something that has brought me joy. While I was introduced to Saturday Night Live and Monty Python’s Flying Circus at a young age, I don’t think I would trade my engagement with the current sketch comedy scene for a dead parrot or samurai delicatessen (hilarious though they may be). As far back as I can remember, I would watch one sketch show after the next: All That in my earliest years, Chapelle’s Show during high school, and Whitest Kids U Know, as well as the more risqué Tim and Eric Awesome Show, Great Job! throughout college. Then in 2013, I was introduced to Kroll Show and taken for a rather wild ride. The show certainly does not have the most insane premises I have seen in a sketch comedy show (see Tim and Eric), but it does pack enough charming, playful irreverence to be polarizing.

The show stars Nick Kroll, a L.A. based comedian, most well-known for his interesting array of characters. Most viewers might recognize Kroll from the hit series The League, where he plays the pompous, obsessive-compulsive lawyer, Rodney Ruxin. However, before I knew him in that role, I had the pleasure of listening to his fantastic characters on the Comedy Bang! Bang! podcast. Fabrice Fabrice, Bobby Bottleservice, and Gil Faizon are just a few of the characters that Kroll has has put a televised face to through his show. That being said, Season 3 is the show’s last, and while it is a little sad for me to see it go, I eagerly await Kroll’s next big project. My love for this show (as well as Kroll’s comedy) stems from his infectious sense of humor, as well as an amazing ability to maintain consistent comedy through each interweaving sketch.

The premise behind Kroll Show is simple: poking fun at popular television shows and the culture that surrounds them. Just to give you a taste, imagine a reality show about a celebrity pet plastic surgeon, who speaks in a monotone voice. Not something you would expect to see a reality show about, but given the popularity of shows that have camera crews follow around parking enforcement officers all day, it isn’t that long of a shot, right? Now imagine that same plastic surgeon ending up on the wrong side of the law because someone who looks exactly like him murdered his wife while the camera crew was filming. It is pretty ridiculous, but the comedy to be found is that Kroll has developed narratives for each of his characters that are advanced through getting new deals for new shows. There are many more examples of this, but the show is worth watching in order to be surprised by each twist.

If you have not been watching the show from the first season, many of the sketches will feel lost on you. Yes, it is a sketch comedy show, but like I said before, Kroll develops narratives for his characters, and all of their stories are creatively ended by the last episode. You see the denouement to the recurring shows of Dr. Armond, Wheels Ontario, PubLizity, and Rich Dicks, but there are enough sketches throughout this season to not make you completely lost. Regardless, coming in during the third and final season would be a rather tough sell. If you enjoy a biting satire at the expense of modern television, then I highly recommend this show from the beginning. It is a joyride that is super quotable: to this day I pronounce “totally” and “definitely” as “turtley” and “dolphinitely” in a dialect reminiscent of a valley girl.